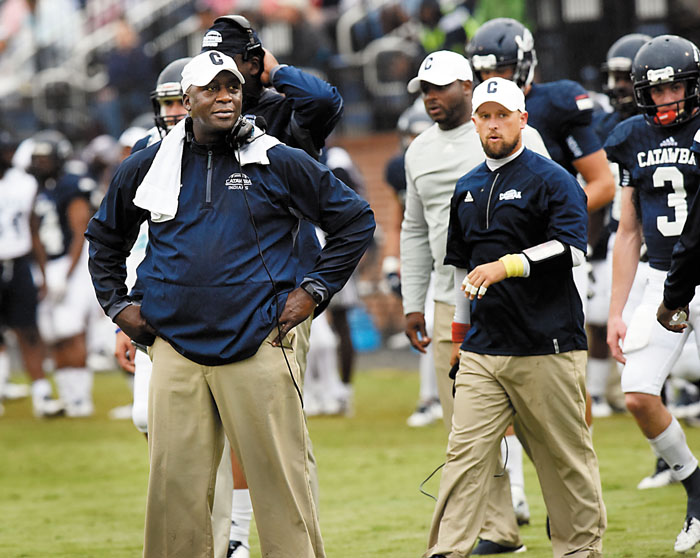 SALISBURY — Every head coach talks family and bonding and brotherhood.

Two of Catawba’s top football recruits have a head start on all that. Southwest Guilford defensive tackle John Oxce (6-1, 260) and Greensboro Dudley linebacker Landen Johnson (6-2, 205) already are close friends. They were teammates and buddies in their middle school days.

Catawba head coach Curtis Walker will reunite Oxce and Johnson at Shuford Stadium. He envisions them being leaders of the recruiting class of 2019 and future fixtures for Catawba’s defense.

Oxce, who competed in the prestigious Shrine Bowl of the Carolinas against guys headed to the ACC, may be the most touted recruit Catawba landed.

Catawba’s area rivals in the South Atlantic Conference went after Oxce and Johnson. That made it even more critical to sign them. Walker and his staff did.

“Oxce is just tremendously strong, and we love the pad level he plays at,” Walker said. “Johnson played on an exceptional high school team and he’s been coached well. He’s a shifty, quick linebacker, but he also will hit people. Those two young men are all about business and they could help us very quickly.”

Catawba’s recruiting continues to tilt southward. Of the 20 new recruits announced by the program so far, four are from South Carolina, four hail from Florida and five are from Georgia. Those three states have supplied many of Catawba’s stars in recent seasons.  Catawba’s out-of-state recruits (14) far outnumber in-state recruits (6) at this point.

N.C. Studs such as Oxce and Johnson who grew up roughly an hour from the Catawba campus, are now exceptions, rather than the rule.

Like most Division II schools, Catawba wants to redshirt newcomers and build long-term depth, but there are always areas of immediate need, where incoming freshmen have the opportunity to play right away.

Catawba lost its kicking game. Placekicker Lee Brackman, a walk-on who developed into an on-scholarship standout, and punter Caleb Berry were seniors.

Games can be lost quickly when punts are shanked, kickoffs are short or routine field goals are missed, and Walker didn’t want to take any chances. So two of Catawba’s recruits — South Carolinians Clayton Crile and Alex Nelson — are kicking specialists.

Nelson will likely be the future punter, as he averaged better than 40 yards per boot in high school and earned All-State accolades. Crile could be the next placekicker.

It’s good to have options. Walker hopes that they’ll push each other every day in practice.

Walker also sees opportunity for newcomers at running back. Kenyatta Greene usually was the fastest man on the field, a game-changer, and made a series of huge plays for the Indians as a senior. He leaves big cleats to fill.

“We went out and tried hard to sign backs like the one we lost,” Walker said. “Kenyatta could score anytime he touched it. We believe the young men we signed will be that kind of threat. They have quickness and explosiveness and the ability to take it all the way.”

Daniel Parker (5-7, 180) comes to the Indians from southern Florida, while Jakevious Wright (5-11, 185) is one of the recruits from Georgia. Both have track backgrounds and great wheels. They’ll bring some excitement.

“He has that same tenacity and strength,” Walker said. “He’ll play to the whistle — or even the echo of the whistle.”

While Ivey-Young might be the closest to being ready to step on the field on opening day, Walker is excited about all the newcomers. Injuries depleted the offensive line last season.

“Offensive line was a position where it was critical for us to add to our depth and we got four good ones,” Walker said.

Rufus’ Twitter handle is @humblebeast70, while Ivey-Young’s is camthegreat_72, but it takes all sort of personalities to form a great offensive line.

Catawba is still in fine shape at quarterback. Reid Carlton has been limited by injuries during his career, but he’s solid when healthy and he still has a year of eligibility. Ken Avent III was the starter most of last season as a redshirt freshman. He’s an accurate passer and an effective runner. He was good most of the time and occasionally great.

But quarterbacks tend to get banged up, and you can’t have too many. On National Signing Day, Catawba inked Kings Mountain’s Kaylon Wade (6-0, 175), who is a serious dual-threat performer.

Wade is Kings Mountain’s all-time leader in career passing yards and total offense. He threw 73 touchdown passes in his career and amassed 7,758 yards of total offense (rushing, plus passing). He also won a lot, directing Kings Mountain to a 12-3 record as a senior. That senior year included 3A state playoff wins against West Rowan, Statesville and Northwest Cabarrus.

“He’s a quarterback with a great skill set,” Walker said. “He can use his legs, but he’s also a very good passer. We’re excited about adding him to the mix.”

On the defensive side, Catawba focused on defensive backs.

Harvey has lock-down corner potential, which is critical for Catawba’s defensive scheme. In a playoff game last season in Florida, Harvey was the difference-maker — intercepting one pass in his end zone and another at his team’s 2-yard line.

Bagley caught passes — and broke them up — for the Chester Cyclones, state champs in South Carolina. Walker sees him as an elite defender.

Womack was a four-year starter and three-year captain for his high school team in Dan River, Va. He played both ways and has track-sprinter speed.

Catawba signed a fifth high school DB, but Georgia product Kendall Lovett (6-2, 185), is likely to make a college transition to linebacker. Catawba needs quick linebackers for its 4-2-5 defense, and Lovett has the frame to play at 210 or 215 pounds in two years. He’s an exciting athlete and his mix of acceleration and aggressiveness could make him an All-SAC  linebacker some day.

Johnson, a smart, tough tackling machine, should be a factor at linebacker very early in his career.

West Stanly’s Lukas Scott  is a recent addition for the Indians. He’s probably best known in Rowan as an outfielder for the Stanly County American Legion baseball team, but he’s also a good football player.

“He surprised us at a workout,” Walker said. “He could run and jump with almost anyone.”

Scott (6-2, 190) will add to Catawba’s linebacker depth and his size and speed should make him an ideal special teams player. Catawba lost some good ones, and those unsung special-teams guys make the difference in a game or two every year.

Catawba has signed one defensive lineman, in addition to Oxce. That’s Joe Camara from Northwest Cabarrus. He’s the closest thing to a local recruit the Indians have signed so far.

Camara (6-3, 260) played defensive tackle for a surprisingly stout NWC team. The All-South Piedmont Conference pick had 73 tackles, including 10 sacks. A lot of those tackles came behind the line of scrimmage, and he forced two fumbles.

Walker said the Indians added the DB and OL groups they really needed, and he’s pleased with the overall class.

“This is a good group of football players, but it’s also a good group of students,” Walker said. “If we can keep them together and let them mature together, they’ll be part of a lot of success.”