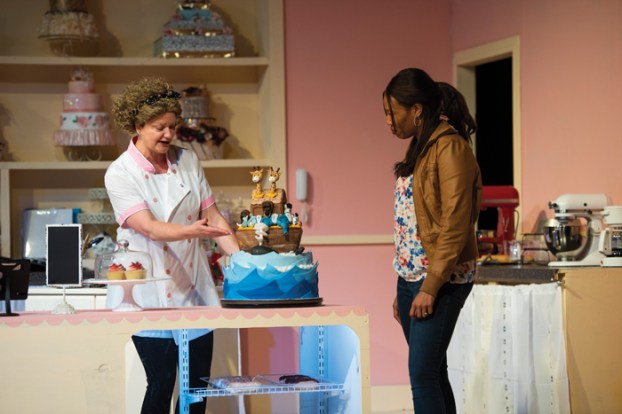 ‘The Cake’ will raise eyebrows and bring laughter

Indeed, eat your fill with the marvelous production of “The Cake” at Lee Street theatre.

The four actors are stellar, and the patron’s night audience was wildly enthusiastic, rushing on stage at the play’s conclusion, dancing and hugging and eating, indeed, cake.

Alice Rich is perfect for the role of Della, the baker with a big heart and a firm belief in the teachings of the Bible.

Emma Rose, too, is ideal as Jen. She draws the audience’s empathy right away, and sympathy, as the small-town girl grown up who is about to marry the love of her life.

That would be Macy, beautifully expressed by Jess Johnson. Macy is comfortable in her skin, most of the time, but it wasn’t easy growing up as a gay black woman whose father abandoned her.

The two make a believable couple, so happy together. So happy about each other’s happiness.

“The Cake” unfolds this way. Della, the happy baker, is excited because she’s going to be on “The Great American Baking Show.” Just what every baker wants, a chance of show off and shine. She has watched all episodes of “The British Baking Show” on which the American version is based.

She’s college-educated and married to Tim, a busy plumber, and she was best friends with Jen’s late mother. In fact, Jen feels like a daughter to her because she and Tim were never able to have children.

In comes Jen, home from New York, so excited to see her dear friend. Della is thrilled, too. She’s glad to see Jen happy, because Jen’s mother’s death, even though it was five years ago, still hurts.

When she finds out Jen needs a wedding cake, she’s over the top. Then Macy, who’s been hanging out at the bakery refusing to try cake, spills the beans, pre-empting Jen’s announcement and explanation.

Macy has already been challenging Della quite a bit about her belief system and her small-town attitude. She doesn’t think Jen owes anyone an explanation.

Della is devastated. This is not what she wanted for Jen. Not at all. Della has a strong faith. She believes what the Bible says and can quote verses.

She looks at her schedule and tells them she’s too booked up for an October wedding, but Macy sees right through that. Jen is very disappointed, though she has a brave face.

As the story evolves, we see Della questioning herself, feeling shaky about her decision. She loves Jen so much, but she just can’t agree with Jen’s lifestyle. Macy continues to be confrontational with Della, whose heart is breaking.

She tries to talk about it with husband Tim, played so nicely by Chuck Riordan, but he’s very much against her making the cake. He finds the idea that Jen has a girlfriend disgusting, even.

As Della broods and practices for her appearance on “The Great American Baking Show,” she fantasizes about the voice of the show’s host giving her instructions. Len Clark’s voice and inflection are perfect for this unseen role as he taunts and challenges Della, and gets downright dirty.

Though so much of the play is poignant, these bits are hilarious as the voice utters more and more outrageous things. Della is trying to work through how she feels about Jen’s way of life and what her part should be and how she can win the competition and impress the hunky host.

Then we see Della in bed with Tim, trying to talk it out, and we see Macy and Jen, arguing, talking, trying to understand and love each other. Everyone is in conflict, Jen especially. She feels she’s being torn in half.

There are so many minutes of laughter, especially with Della, who is a good person in a situation that is very difficult for her.

One scene, where Della tries to seduce her husband with buttercream, is hysterical and really gets the audience worked up. She’s feeling unloved and like a failure, and she needs some compassion and outright passion.

Macy is the loudest, angriest one in the cast, and she’s just so tired of being labeled as different or weird or disgusting. After a confrontation with Della, she writes a story about it and publishes it on social media, with serious consequences to follow.

A lot of things happen, a lot of conflict and disappointment and failure. But each step makes sense. Each fall comes with a rise. By the end, people can come together at least part of the way.

You’ll recognize lots of local references in the play, written by Bekah Brustetter of Winston-Salem.

Macy drew lots of laughs suggesting they just get a cake at Food Tiger — she is a New Yorker, you know. And the wedding is going to be at Reynolda Gardens.

Please note, this is not a play for children, due to some language and adult themes. Teens and adults can learn a lot from what goes on, and it could help them start a conversation that might be extremely difficult.

Director Kindra Steenerson has done a great job with an outstanding cast to bring this funny and sensitive and, yes, controversial play to Lee Street theatre. A shout-out to the running crew, which changes the set several times — Linda Hughes, Makala Whitehead, Ruby Jones and Callie Herring. They earned applause during the performance.

It’s more of the same today, but it won’t be so cold. We have an 80 percent chance of rain,... read more