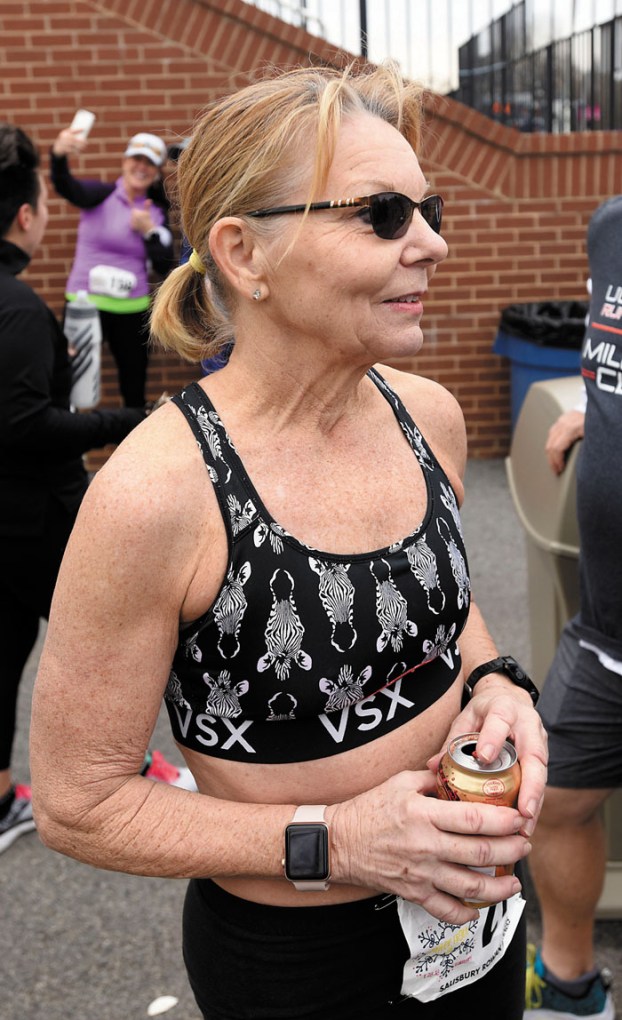 Trudy Gale is a long time runner in the Winter Flight Run. photo by Wayne Hinshaw, for the Salisbury Post

Aging gracefully with your running

Exactly 20 years ago, I didn’t think about getting older at all and thought my running would always be fast. Down deep, I knew a slowdown would come but just couldn’t grasp the idea. Every weekend meant a race, sometimes two and once, an incredible four races. Harder than any marathon I ever ran.

Last week, I had breakfast with Trudy Gale, Rowan’s Queen Emeritus of road racing. Now 60, she has won more races in Rowan than anybody ever will. And she just ran a sparkling 41:59, good for top senior grandmasters in the Winter Flight 8K. We spent part of that breakfast discussing aging and running and our expectations.

Trudy said, “Although I’m no longer looking for that personal best, I’m still serious when I race.  You put a number on me and that competitive spirit kicks in.  I could never run a race for fun. I am still going to push my body and mind as hard as I can.  Every race hurts and I have told myself often that if I can get through this, I’ll never run another race. But I do.”

She continued, “In the past, I would be so disappointed if I was injured or if something prevented me from racing.  Now, I just run a few races a year.  Generally, I choose those races that have meant something to me in the past.  I’ve only missed two Cooper River Bridge races since 1996 and I love that race.  I like to run Winter Flight because I feel like I have a “home court advantage” because I have run that course at least a hundred times in training. I was part of planning that race from the very beginning, so it is dear to my heart.   If my running is going really well, I’ll try to find a race nearby.  It hurts more at 60 than it did at 30 so I don’t enjoy racing too often.”

When we were both racing a lot, we did speed work on the track weekly, a race and a significant long run and much bigger weekly mileage. Mine has dropped from a peak of 100 miles to an average of 40. Trudy just runs four days a week currently, but I still push for seven. She does an occasional track workout and I do lots of mile repeats on the road, but it is not the same. It is impossible to run hard every day like we once did. And while the effort is there, we just can’t go as fast. Trudy said, “The one difference is that I’m not racing a lot so I don’t train nearly as hard.  I can run at a more relaxed pace and not be thinking about my next race.  In the past, I think I ran to race.  It was about chasing a better time, going for that trophy.  I enjoyed that at the time, but it was stressful.  I still get stressed before a race, but since I race less often, my runs are more relaxed, not training runs.  I can enjoy social runs with friends.”

I think that Trudy would agree that it seems as if we are running as hard as we did before but the times don’t show it. The effort is there. The benefits of running are still the same. Trudy said, “Running makes me feel good, it promotes good physical and emotional health, it’s a good exercise for weight control.” For me, its how I balance life. No problem is too big to be solved or at least put in perspective on the run.

As we age, our times will slow down at some point, but not the reasons to keep running. The bigger picture becomes clearer. Trudy said, “That slow down can be hard to accept, but you have to readjust your thinking and set different time goals. Really, my only goal is to run for the rest of my life.  I don’t care if I ever run another race, I just want to be able to run.  I am not a pleasant person to be around if I can’t run.  I want to be that 90 year old woman shuffling along and some youngster say, “You go girl!”

Speaking of racing, the spring season is about to crank up. The always popular and well-managed “Will Run for Food 5K” is set for next Saturday at Centenary Methodist Church. Proceeds allow church members and community volunteers to package thousands of dehydrated meals for the needy, both in the US and abroad.

Look for other upcoming events at www.salisburyrowanrunners.org