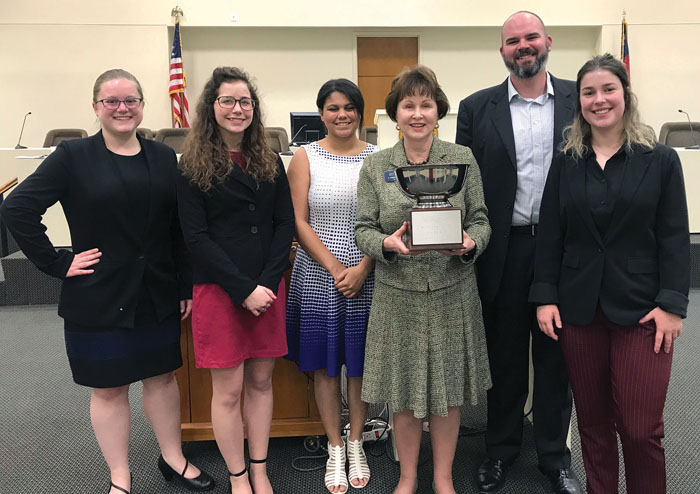 In a close competition, Catawba College bested Wake Forest University in the finals of the North Carolina Independent Colleges and Universities eighth annual Ethics Bowl. The theme was “Ethics in the Environment,” and the topic for the finals round was “Sunscreen and the Environment.”

Catawba faced Barton College in the semifinals, as Wake Forest faced Meredith College. The case for that round was “Nuclear Energy As an Ethical Energy Source.”

Norris T. Feeney, an assistant professor of politics, is the team’s campus coordinator.

Feeney attributes the success of this year’s team to the fact that its members enjoyed each other’s company and exhibited strong teamwork skills. He says the attitude of Catawba’s competitors also contributed to victories as they remained positive and had fun during the overall contest, which balanced against the stress and intense focus.

“Each round was scored extremely closely between Catawba and the opposing team,” Feeney says. “In my five years as a campus coordinator, Catawba College has not previously seen as many 2-1 decisions in the preliminary rounds, and the points separating teams in each round have never been fewer than in this year’s event.

“I hope our campus community recognizes that this year’s success would be impossible without the willingness of excellent Catawba students who already have considerable commitments across campus to sacrifice additional time and energy to prepare over several months for this annual event..”

Twenty-two private colleges competed in the Ethics Bowl in Raleigh on Feb. 8-9. More than 60 corporate, nonprofit, legislative and community leaders were judges and moderators.