Livingstone women put it all together, crush Shaw, 100-58 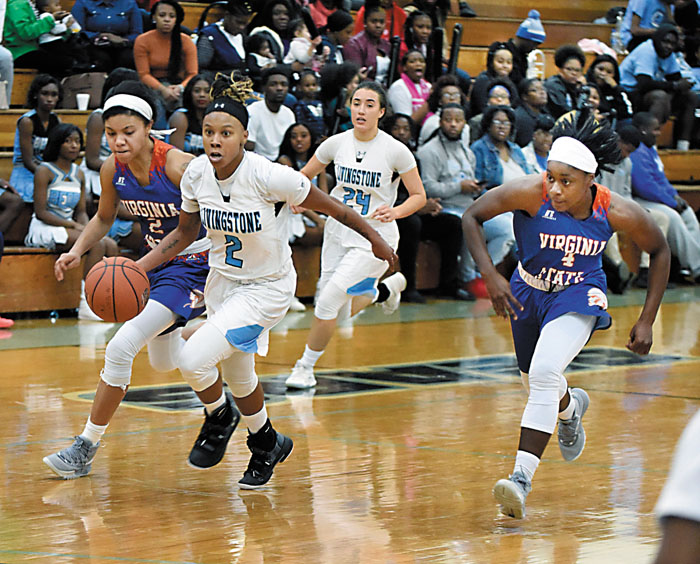 SALISBURY — Livingstone’s women led by 37 points at halftime and it only got worse for the visiting Shaw Bears on Saturday afternoon.

Daisa Harris, a transfer guard, had her best game to date and Livingstone won the never-was-close college basketball game at New Trent Gym, 100-58.

Harris, a 5-7 speedster who also has a solid outside game, scored 16 points in the first half, 17 in the third quarter and added eight more in the final period for a career-high 41 points.

The Blue Bears, who suffered through a mid-season 12-game losing streak, have now won four of five games. Coach Tiffany Silver’s team improved to 7-16 overall and 4-9 in the CIAA, but more importantly (for tournament seeding purposes), is 4-3 in the league’s Southern Division.

Silver installed a new full-court press during the week and the Blue Bears ran it to near-perfection — 40 Shaw turnovers in 40 minutes.

“The team just bought into the defense today,” said Silver “We wanted to press the entire game, no disrespect towards Shaw, but it was for our team’s endurance and experience. We’re going to have some close games as we go forward and it’s important for our team to push themselves for 40 minutes.

“That was the biggest thing today, to let our defense be our offense,” continued Silver. “And it makes the game so much more fun, not the possessions that are given to you, but the ones you take away.”

Harris echoed her coach and wanted to talk more about the team’s defense than her 41 points.

“Coach put in a new press, which we just learned two days ago, and we executed well enough to cause 40 turnovers,” said Harris, a junior from Silver Spring, Md. “That opened up the floor for us and our transition was great today.

“But I can’t say enough about our defensive pressure,” added Harris. “We knew that since we beat them at Shaw (85-70 on Jan. 28), they would give us their all. Our defense allowed us to cause turnovers and that led to scoring because we executed our offense so well.”

Livingstone was credited with 19 steals and scored 47 points off of Shaw turnovers. The Blue Bears also had 26 fastbreak points, compared to zero for the visitors.

That’s how LC essentially broke the game open in the very first quarter, scoring 31 points. Darra Walker hit three straight 3-pointers and Adel Allen added another one as the Blue Bears jumped out to a 28-8 lead.

In the second period, after a early lull, Livingstone caught fire again, going on an 18-2 run in the final 6:18, ending the first half at 52-15. Shaw’s only two points of the second quarter came on a layup from Caylie Hartman with 33 seconds left.

Most of the LC points were layups, off of Shaw turnovers, but guard Kedra Bradley did bury a 3-pointer just before the halftime buzzer.

“We gave up a 31-point quarter, then had a two-point quarter on offense and the hole was just too deep,” said coach Jacques Curtis, in his 20th year at Shaw. “Our goal in the second half was just to be competitive and I thought we did that.”

Shaw’s 6-4 post player, Macy Keen, picked up two fouls in the first two minutes of the game. That definitely hurt her team’s chances. Keen scored just two points in the first half but had 22 after halftime.

“When Macy got into early foul trouble, it kept us from we wanted to do and helped them do what they wanted to do — because they didn’t have to worry about anybody inside,” added Curtis. “But not to take anything away from Livingstone. They shot the ball real well today.”

“It did work to our advantage when Keen was on the bench,” confirmed Silver. “She wasn’t in there, deflecting or altering shots, and that made our drives more productive.”

Silver was also pleased with her team’s ability to pull away, after building the big advantage.

“We’ve had big leads before, but it’s sometimes been our achilles heel, not being able to put an opponent away,” said Silver. “We challenged them to stay hungry and today, our second quarter was actually better than our first one.

“We’re absolutely playing our best right now,” Silver continued. “It’s all about getting better by February. We’re in the second half of division play now and the tournament is coming up.”

Harris’ monster game included making 19-of-31 shots, including 2-of-5 from long range. She made her only free throw in addition to compiling four rebounds, six steals, eight assists — all while committing just three turnovers in 35 minutes.

“Daisa is finally coming into that rhythm that we knew she had,” said Silver. “She was a JUCO All-American (at Harford CC), so we knew she had it in her. But she sat last and this year, she kind of got off to a slow start. Now, she’s coming into her own … this is why we wanted her here.”

Harris also made her teammates better on Saturday as four other Blue Bears scored in double figures — Bradley (15), Walker (12), Allen (12) and Asia Green (10).

NOTES: It was the first game this season that Livingstone hit triple figures, after scoring in the 90s three other times. … The Blue Bears return to action on Wednesday at Fayetteville State (5:30 p.m.).