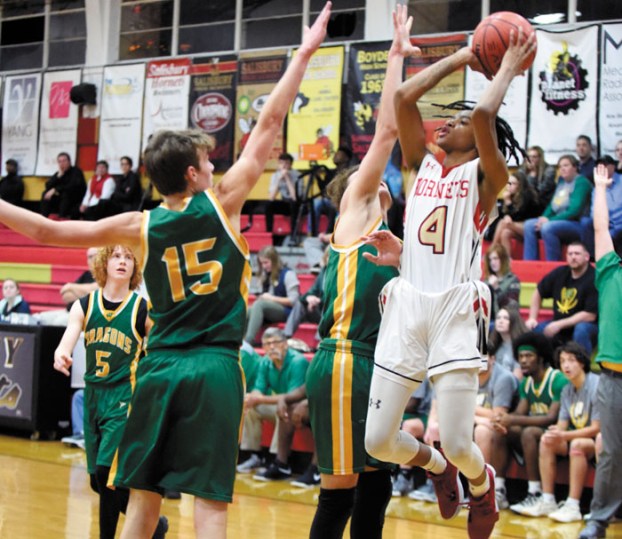 Salisbury's K.J. Chawlk (4) scored 15 points to lead the Hornets past East Davidson, 65-52. ... He is shown above in an earlier game against West Davidson. ... File photo by Wayne Hinshaw, for the Salisbury Post 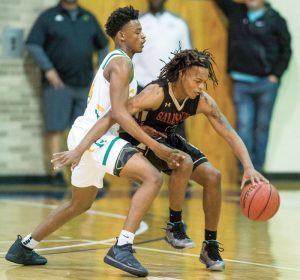 Due to injuries and off-the-record dismissals, you needed a scorecard to know the players in Friday night’s 65-52 Central Carolina Conference victory against visiting East Davidson.

“We’re playing right now with one guy with varsity experience from last year — that’s Cam Gill,” said Withers, Salisbury’s fourth-year coach. “That makes it tough. The other guys are having to grow up.”

Other than misfiring on 24-of-37 free throw attempts, the Hornets earned a seat at the big-kids table — and their seventh win in the past eight games. Most importantly, Salisbury (15-6, 13-3) solidified its hold on second place, entering the league season’s final week.

“It’s a good win, but we didn’t play as well as we should have,” senior Kevin Chawlk said. “We missed a lot of free throws. That comes from not concentrating. Defensively, we’ve got to get better too. There was a lack of communication and way too much reaching.”

Chawlk led Salisbury with 15 points and Gill added 14. East Davidson (4-17, 3-13) fell behind, 14-3, in the opening six minutes before using a 9-0 run to close within two points. It was still a tight match until Tajareia Blackwell, Joseph Witherspoon and Kam Alford hit layups to provide a 30-20 SHS lead at halftime.

“We’re still learning, even though it’s February,” Withers said. “But guess what? The guys are still good enough to get wins — as long as they do it the right way.”

Injuries to Jabril Norman, Bill Fisher and Jack Fisher coupled with two player discharges left the Hornets struggling to bury East Davidson, a team they zapped 68-25 on Jan. 4. They led by as much as 46-26 when Gill found a seam down the left side and raced in for a layup, late in the third quarter.

Yet, the Golden Eagles refused to yield. Six consecutive free throws by senior Ethan Collett and a turn-around hook shot by Josh Brower trimmed Salisbury’s lead to 60-50 with 2:27 remaining. Down the stretch, the hosts used Nate Brown’s layup and three free throws from Gill to fend off any challenges.

“If you had asked me at the end of last season what this team would look like,” Withers said, measuring his words like a 2-0 fastball, “it’s not this. There are eight or nine guys who aren’t here. As coaches, that makes us even prouder to see what this team has accomplished. We’re making a run just off of grit and effort.”