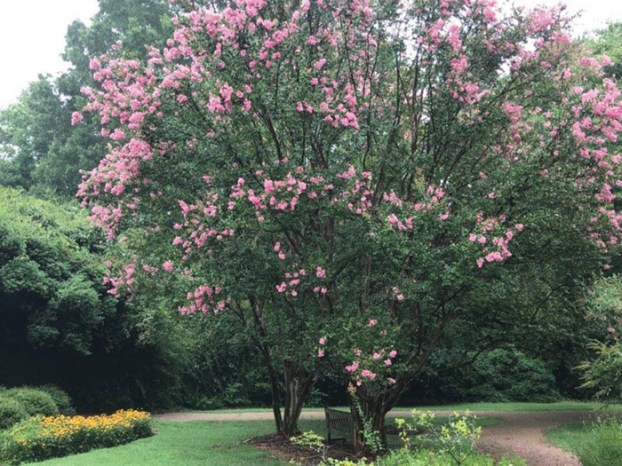 Submitted photo Treat your crape myrtles with kindness and they'll give you years of beauty.

Be kind to the beautiful crape myrtle

The accepted name is generally crape myrtle. I believe it can be called all of these names with some degree of confidence that we are discussing the same plant.

The crape myrtle is also not a true myrtle. The correct scientific name is Lagerstroemia indica or faurei. These two species are the most common in the United States and are only two of about 50 species of known Lagerstroemia.

Crape myrtles are native to Southeast Asia and were introduced in England around the 1750s. Because of England’s cooler climate, they had a hard time getting them to bloom properly. In the late 1700s, the crape myrtle was introduced to the United States, where the warmer climate brought on an abundance of blooms and endeared it to everyone who saw it.

How can I say that? Well here we are 200-plus years later and the crape myrtle is still thriving. One hundred and twenty varieties to choose from, 35 feet tall to 2 feet tall. Crape myrtles come in almost every flower color, different colored leaves, disease resistant varieties and different colored, textured barks.

Please don’t get me started on how these great plants are so horribly topped year after year.

There are some steps that may be accomplished in late February to keep your crape myrtles happy — light pruning of seed pods, pruning lower limbs, sucker growth and pruning interior limbs for increased air circulation.

Sometimes crape myrtles need a little help with insects like aphids and scale or fungus like powdery mildew and sooty mold. Insects can usually be taken care of with safer soaps or horticulture oils. Depending on how bad powdery mildew is may determine if fungicides are needed.

If you must fertilize, use a natural fertilizer lower in a nitrogen-phosphorus-potassium (NPK) ratio. Crape myrtles are great plants, birds love them, bees love them and humans love them too, so plant them wisely.