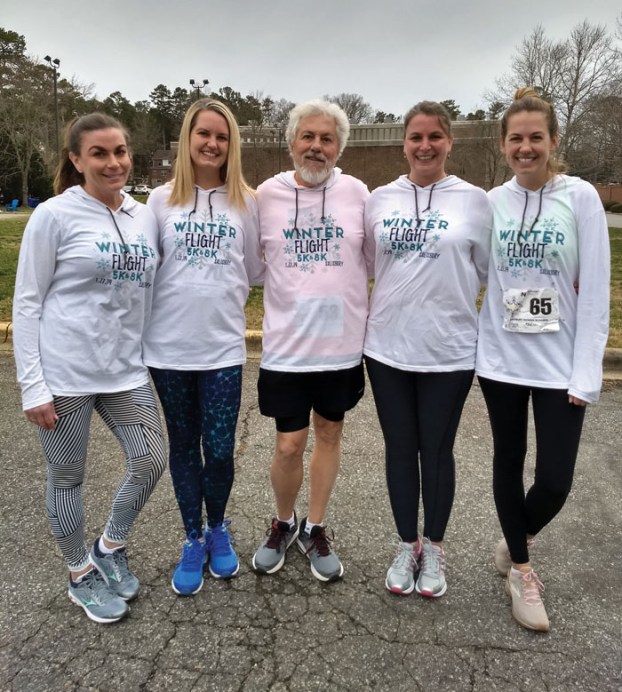 I love adventures! And challenges too! Last Sunday, about 360 runners laced up their running shoes and hit the pavement at Catawba College for an 8K/5K or half mile fun run. Every age from 3 to 91, way more women than men, five racing wheelchairs and a huge increase over last year in participation. All this just a few months after the race committee found out that the Running Journal Grand Prix, a points series of the oldest and best races in the southeast, had been cancelled for 2019. Long held as a kick-off to the NC racing season and often the state championship 8K, Winter Flight organizers wondered if runners would still turn out with the big regional classification and the points competition gone. What could we do to increase the number of participants and at least keep the race relevant?

We decided to time the 5K Health Run/Walk for the first time and provide awards, put Meredith Abramson’s logo on an athletic hoodie instead of a shirt and got hometown grown Mary Tramazzo involved both as a keynote speaker for our pasta dinner and a favorite in the 8K.

I can assure you that it is was harder to pull off an event like this with such a high bar already set than it is to ride a loaded bicycle over the Rockies. There are so many moving parts, two quality races going on at the same time and about 75 volunteers required. Still, its like a great big birthday party for me each year, one where I see lots of old friends and make a few new ones too. Winter Flight is something similar to what the New York City Marathon does for that city — it comes alive with a once-a-year excitement. Runners came to Salisbury this year from Hawaii, California, Illinois, West Virginia and South Carolina.

Madison Long came home from California. Her dad, Mike Long, said, “I have run the Winter Flight many times, going back to when you gave out sweatshirts. It’s one of my favorite runs. Madison is a nurse in San Diego and had to work over Christmas, so this has been her post-holiday visit home. It was her first time running Winter Flight. I have four daughters that ran in the race this year. Jennifer, 40, was in the Navy, and after she got out said she would never run again. Emily, 37, is a runner and lives in Charlotte. Krista, 33, has a shirt that says, “I hate running,” but a couple of years ago she and Madison ran the Sisters Half Marathon together in Oregon. We have four girls, all of whom are beginning to see the benefit of running. For me the memories of us getting together as a family to run are priceless.”

All of our fun runs are a half mile in length and previously meant for kids, 12 and under. Liz Moomey from the Post found Jack Sherrard, who registered for the fun run at age 91. His doctor told him to get moving and his completion of the half mile was a big step forward. Five other adults completed the fun run, so there won’t be an age limit going forward.

At the front of the women’s pack was the battle expected between two quality athletes at the top of their game, one of them Salisbury native Mary Dudley Bertram Tramazzo. She battled last year’s winner, Shawanna White from Columbia, SC, until White pulled away in the last mile for a 14 second win. Both White and Tramazzo are still getting better, each hoping to qualify for the 2020 Olympic Marathon Trials in Atlanta.

A few statistical things about the race surprised me. Nationally and locally too, women are continuing to outnumber men in road races, reversing long ago trends gradually each year. In the 8K (4.97 miles), 208 finishers included only 85 men or 41 percent. In the 5K (3.1 miles), it was even worse with men only numbering 28 or 108 finishers. That is just 26 percent.

What did happen is that Salisbury and Rowan came out in a big way to support Salisbury Rowan Runners and Rowan Helping Ministries. It is interesting to look over all the states and towns represented on the results at www.salisburyrowanrunners.org

As for me, I can’t wait until next year’s big 37th Annual Winter Flight birthday party on January 26, 2020. We’ve got a place for everyone!

By Susan Shinn Turner for the Salisbury Post In October, David Hord ran a marathon. In December, he had a... read more