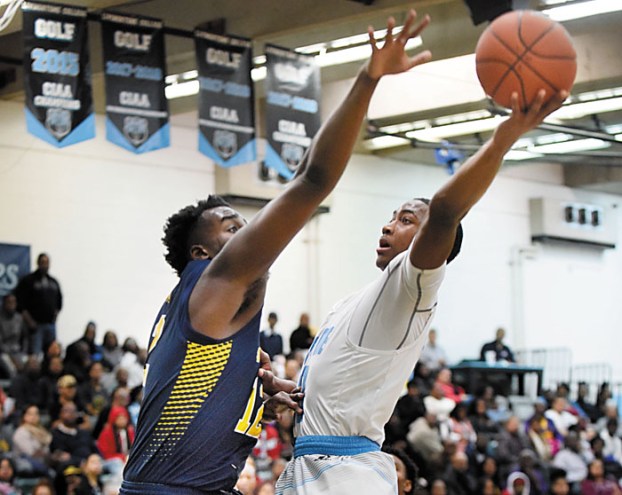 Wayne Hinshaw/for the Salisbury Post ... Livingstone’s Cameryn Carpenter, right, shown during action from an earlier game this season, was instrumental in the Blue Bears’ 83-82 win over W-S State on Saturday.

Another big win for the Blue Bears 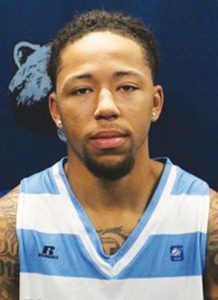 The victory, Livingstone’s seventh in the last eight games, keeps the Blue Bears atop the conference’s Southern Division. Coach James Stinson’s team is 14-7 overall and 7-5 in the CIAA (5-1 in the division).

Prior to Ray’s late heroics, things were not trending well for Livingstone. WSSU erased 10-point second-half LC lead and forged ahead by eight points (79-71) on a layup from Xavier Fennell with 4:43 left.

But from that point, the Blue Bears outscored the Rams down the stretch, 12-3.

Following a media timeout, Ray made a free throw and teammate Cameryn Carpenter followed a Rams’ turnover with a layup, making the score 79-74.

The Rams’ William Crandell and Carpenter traded baskets before Ray was fouled and made two free throws, bringing LC to within 81-78 with 2:23 remaining.

Just 11 seconds later, after another WSSU turnover, Carpenter drilled a 3-pointer for the Blue Bears, tying the score at 81-81. The final minutes saw two more Rams’ turnovers and three missed shots by Livingstone.

The dry spell was ended with 31 ticks left, when Carpenter fouled the Rams’ Mason Harrell, who made one-of-two foul shots.

Trailing, 82-81, Carpenter missed an inside shot, but the rebound went out of bounds off of a WSSU player. With another chance, Livingstone got the ball to Ray, who was fouled by the Rams’ Robert Colon with just :05 left.

Ray, who scored a game-high 33 points, calmly made the first free throw, tying the game and WSSU called a timeout to ice the Blue Bears’ guard.

It didn’t work. Ray made the second free toss and the game ended with LC’s Navar Elmore blocking a shot by Colon at the buzzer.

Ray made 8-of-19 shots from the floor and 14-of-18 free throws for his 33 points. Carpenter followed with 13 points in the LC scoring, which saw 12 players score at least a point.

Crandell made 5-of-11 shots and 7-of-8 free throws for 17 points, leading the Rams. He also grabbed 10 rebounds, for a double-double.

Jamel McAllister followed with 15 points, including 10-of-10 at the foul line. Harrell also scored 15 points for WSSU and Colon added 10.

The foul line was another story as both squads were outstanding. The Blue Bears, led by Ray, made 23-of-30, while WSSU dropped in 33-of-43 free tosses.

NOTE: Livingstone has a bye in the league schedule on Wednesday and returns to action next Saturday at home against Shaw — 4 p.m., at New Trent Gym, following the women’s game.