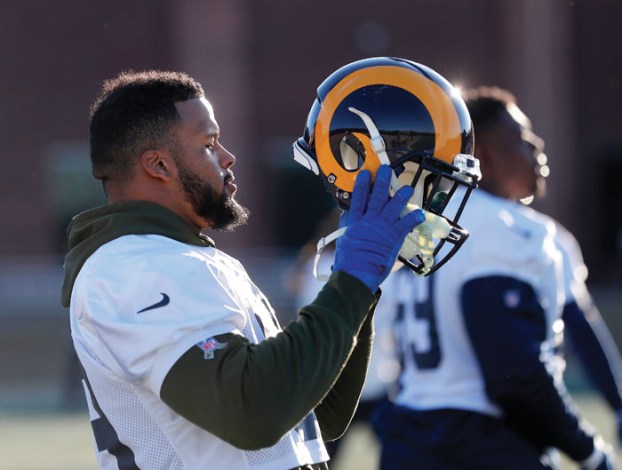 Ram it: LA really is ready to knock off Pats in Super Bowl 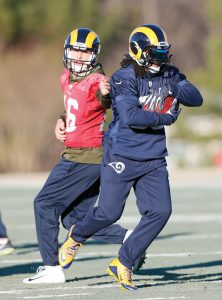 By GREG BEACHAM, AP Sports Writer
ATLANTA (AP) — The Los Angeles Rams aren’t ready to beat the Patriots, according to much of the conventional wisdom around the Super Bowl.
Only four members of the upstart NFC champions have ever played in a Super Bowl. Even though the Rams are coming off a 13-3 regular season and two playoff wins with a brilliant offense and a star-studded defense, who would believe a 33-year-old head coach and a third-year quarterback could prevent the great Bill Belichick and Tom Brady from winning their sixth championship?
Why, to find a head coach and a quarterback who beat the New England Patriots in their Super Bowl debuts, you’d have to go all the way back to … last year, when Doug Pederson and Nick Foles did it for Philadelphia.
That fistful of rings does not make Belichick and Brady unbeatable, and their Patriots are not infallible in big games.
These Rams may be new here, but they’ve already demonstrated the talent and tenacity to hang with anybody while going 26-9 since Sean McVay and Jared Goff teamed up.
Their first Super Bowl together is a chance to show it to the world, according to their stars.
“This is the biggest stage I’ve ever played on, so you’ve just got to leave it all out there,” All-Pro defensive tackle Aaron Donald said. “We’re confident against anybody, because we know what we’re capable of.”
Much of the Rams’ hopes rest on McVay and Goff, whose two years together have included very few bad days. While Goff doesn’t yet have Brady’s steadiness, his best games have been phenomenal — and McVay has had two weeks to prepare him for anything the Patriots might throw at the Rams.
Goff isn’t doing this alone, either.
Todd Gurley insists he’s at full strength after barely playing in the NFC title game, and C.J. Anderson is a capable replacement behind the offensive line that has been the backbone of McVay’s success.
Receiver Brandin Cooks and Robert Woods are clicking splendidly with Goff, while McVay frequently uses tight ends Tyler Higbee and Gerald Everett in big situations. Look out for McVay exploiting Gurley’s skill as a pass catcher, which could pose a matchup problem for New England.
If both offenses get rolling, the Rams are tough to beat in a shootout. Just ask Kansas City, which lost the teams’ 54-51 Monday night epic in November.
But the Rams likely will need to cause havoc for Brady and his offense to win this one, and LA has the talent to give it a shot.
Brady hasn’t been sacked in the Pats’ two postseason games, but he also hasn’t faced Donald, the best defensive football player in the world right now. He led the NFL in sacks during the regular season, and his constant pressure up the middle during the postseason has freed up Ndamukong Suh and Dante Fowler to make numerous big plays as pass rushers.
Coordinator Wade Phillips’ defense has exploitable flaws, but Donald, Suh and Michael Brockers can cover up a lot of them if they can collapse the Pats’ sturdy offensive line. They’ll aspire to the masterpiece created by Michael Strahan, Osi Umenyiora, Justin Tuck and coordinator Steve Spagnuolo’s Giants defense against New England in February 2008.
The Rams insist they won’t be awed by the 41-year-old Brady, either. Even if the Patriots stick to quick dropbacks and short routes, Los Angeles came up with 18 interceptions in the regular season, matching the Pats for third most in the NFL.
“He’s the all-time great, but he’s beatable,” safety John Johnson III said. “We can’t go in there with the mindset of, ‘Ohhh, it’s Tom Brady.’ He’s definitely beatable, so we’re going to give him a go.”
Most observers believe the Rams have more talent on their roster than the Patriots, and McVay is one of the sport’s smartest coaches. What Los Angeles doesn’t have is Belichick, Brady and Super Bowl savvy.
The Rams are quietly confident it won’t matter.
“We know what it means to play in big games,” Rams left tackle Andrew Whitworth said. “This is the biggest, but it’s not bigger than us, I promise you.”
___
More AP NFL: https://apnews.com/NFL and https://twitter.com/AP_NFL