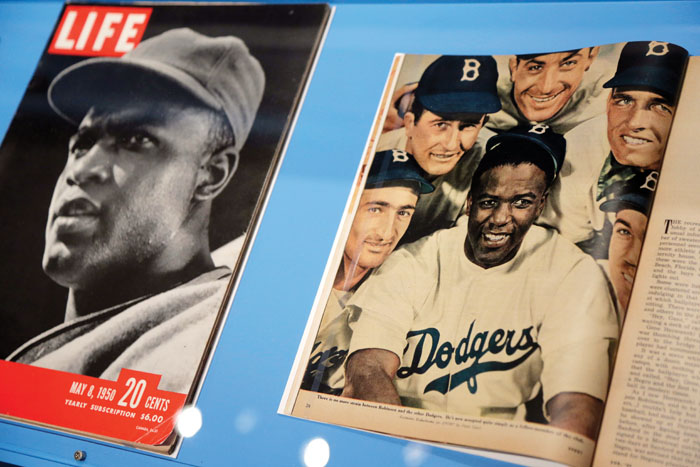 In this Tuesday, Jan. 29, 2019 photo, news articles about Brooklyn Dodgers baseball player Jackie Robinson are displayed at the exhibit "In the Dugout with Jackie Robinson: An Intimate Portrait of a Baseball Legend" at the Museum of City of New York in New York. The 100th anniversary of Robinson's birth is celebrated Thursday, Jan. 31, with the opening of the exhibit. (AP Photo/Seth Wenig)

NEW YORK (AP) — As the 100th anniversary of Jackie Robinson’s birth approached, Sharon Robinson is sure her father would have a lot to say about the current political climate in the United States if he were still alive.

“I know he would be outraged,” she said.

Jackie Robinson, who died at age 53 in 1972, would have turned 100 on Thursday. He broke Major League Baseball’s color barrier with the Brooklyn Dodgers on April 15, 1947, and the centennial of his birth marks the opening of an exhibit at the Museum of the City of New York titled “In the Dugout with Jackie Robinson: An Intimate Portrait of a Baseball Legend.”

It features memorabilia and 32 photographs originally shot for Look magazine, plus footage of Robinson hitting grounders to his son in the backyard of the family house in Stamford, Connecticut. Many of the photos shot by Frank Bauman and Kenneth Eide from 1949 and 1953 had not been on public view previously.

Rachel Robinson, the ballplayer’s wife, planned to attend the opening, still a force at age 96. The celebration and baseball’s annual Jackie Robinson Day on April 15 will focus attention on the Jackie Robinson Museum in the SoHo section of Manhattan, scheduled to open in December.

Della Britton Baeza, CEO of the Jackie Robinson Foundation, said $28 million has been raised toward a $42 million goal — matching Robinson’s uniform number, which was retired throughout the major leagues in 1997. The money raised covers construction costs, and an additional $4 million is needed for marketing and staff. The overall goal includes $10 million for an endowment, she said.

“In this day and age in this climate of our country, we really are going to take on this issue of discussing race relations,” Britton Baeza said. “What better place than a place that pays tribute to one of the great integrationists of the last century? So we’re going to roll up our sleeves. We will do it from a position of goodwill and from a position of starting with the facts, if you will, but we’re going to take these things on and talk about activism in sports.”

The exhibit, which runs until Sept. 15, is a partnership between the Museum of the City of New York and the foundation, and some of the memorabilia will wind up at the Jackie Robinson Museum.

Baseball Commissioner Rob Manfred has been a major backer of the Jackie Robinson Foundation and the museum, and he will be honored at the foundation’s annual awards dinner on March 4 along with businessman Maverick Carter and musician Kristopher Bowers.

“The centennial of his birth is an opportunity for MLB to recognize the historical significance of Jackie Robinson and to continue to teach younger people the impact he had on baseball and society,” Manfred said.

“There was a shift in their awareness with the movie ‘42,’” she said of the 2013 film that starred Chadwick Boseman as Robinson and Harrison Ford as Brooklyn Dodgers general manager Branch Rickey. “A number of players came up to me or coaches and said, ‘I thought I knew the story but now I get it.’ There’s no time better than now because this country needs healing, needs to continue to move forward in terms of not just dealing with racism but sexism and the whole gamut of isms. So there’s no better time to look back into history and see how much has changed but how much work still needs to be done.”