SALISBURY — Local attorney James Davis, of Davis and Davis Law downtown, is celebrating his reception of a “Super Lawyers” award.

This will be Davis’ fourth time and third consecutive year receiving the award.

Davis was born and raised in Rowan County. He was licensed to practice law in North Carolina in 1991 after receiving a law degree at Regent University College at Virginia Beach, Virginia. He joined the family-owned law firm of Davis and Davis. 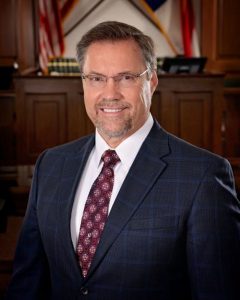 The firm has been serving Rowan County and the surrounding area for more than 65 years. His father, Robert M. “Bob” Davis, founded the practice in 1950, according to the firm’s website.

In 2005, Davis took the lead at the firm and runs it to this day. While practicing there, he has had three dominant practice areas of law — criminal defense, domestic and general litigation. He is also a North Carolina board-certified specialist in federal and state criminal law.

Asked about the most recent award, Davis said he is “humbled and grateful.” He said the honor is a “tribute to the local bar” as well as “the local judges” and that the reception of the “Super Lawyer” award stands as testament to the success of his firm’s legal practice.

The patented award is based on four criteria for its rating system:

• Lawyers are nominated by their peers.

• The candidate conducts independent research based on 12 defining categories.

• Candidates are expected to undergo a process of peer evaluation.

• In a final selection process, only 5 percent of candidates are confirmed.

Davis said the award would not have been possible without the success of his paralegals, sister and son. Davis’ sister, Jennifer Davis Hammond, who also been a paralegal at Davis and Davis, now works as an attorney for the firm with a focus on family law. His son, James A. Davis II, is also an attorney at the family law firm.

Stanly News & Press ALBEMARLE — A former Pfeiffer University administrator is being investigated by the FBI. The investigation appears... read more