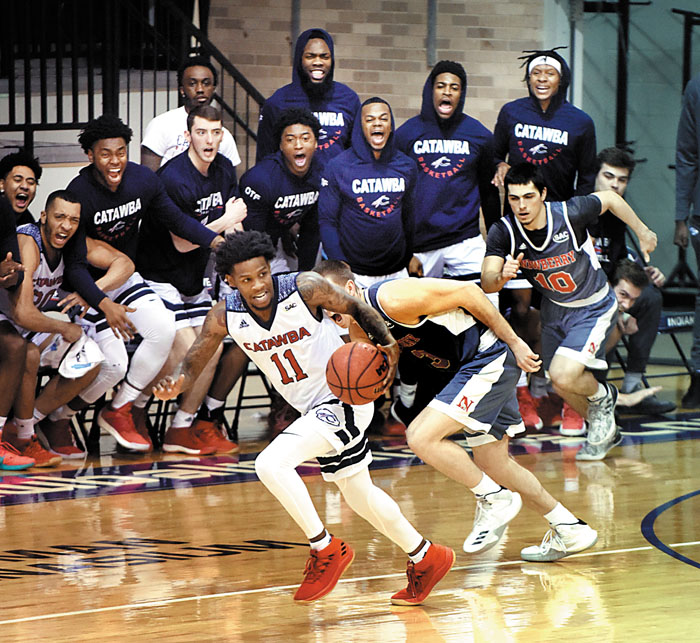 SALISBURY — Catawba’s men’s basketball team is heading into February with a full head of steam — and it’s all Marcell Haskett’s fault.

The junior guard scored a career-high 35 points Wednesday night at Goodman Gym, where the Indians earned a 100-85 South Atlantic Conference victory over Newberry.

“It’s always about the finish, never about the start,” Haskett said, after fourth-place Catawba (15-5, 8-4) shot 52.8 percent from the field and won its second straight game. “We lost a few in a row earlier this month, but we never got down on ourselves. We never got off track and tonight, we just ramped it up a little bit.”

Especially Haskett. The six-foot hero from Newport News, Va. turned his second start of the season into a series of touchstone moments. He shot 14-for-22 from the floor and converted half of his 12 three-point attempts — helping the Indians move within three games of league-leading Queens with eight to play.

“We’re not in perfect position, but we’re chasing that lead pack,” said coach Rob Perron. “And we’ve demonstrated we can play with anybody. We’ve evolved a little bit and tinkered with the lineup. We’re trying to play nine or 10 guys in the first 10 minutes and land some body blows.”

That strategy didn’t bear fruit until midway through the first half. Catawba never trailed, but Newberry (7-12, 3-9) hung around in the early stages — forging an 18-18 tie on Marshall Lange’s 3-pointer before inching within 25-24 on Lange’s driving layup with 9:54 remaining in the first half.

“We had pretty good offensive production,” said Newberry coach Dave Davis. “And we’ve been shooting it absolutely lights out our last two games — 22 3-pointers in one game and 18 in another. But tonight, we seemed to miss a lot of layups. Catawba is a crazy, powerful offensive team. They just had a great scheme. They spread us out and kept driving on us. We didn’t seem to have an answer.”

And Catawba — which lost consecutive SAC games against Queens, Anderson and Lenior-Rhyne during a mid-month skid — kept firing questions. It launched a 10-0 run when Haskett drove the left side for a layup, then used 3-balls by forward Daquan Lilly and Haskett to mount a 35-24 lead. When senior Jameel Taylor scored on a last-minute back-door play, the hosts had a 55-42 halftime advantage.

“We went back to the drawing board,” Lilly said, after contributing a double-double (17 points, 10 rebounds). “After we lost three in a row, we had to re-focus and re-evaluate what Catawba means to us. This was our response.”

Newberry got as close as 59-51 following a 3-pointer and fastbreak layup freshman Tai Giger, early in the second half. But Catawba counterpunched with a 13-4 scoring spree and took a 17-point lead when the 6-foot-6 Lilly muscled through the lane for an easy two with 13:21 remaining.

“We told ourselves to stay on the gas, no matter how much we got up,” Lilly said after shooting 6-for-11 from the field. “We knew what they were capable of.”

So did Haskett. His last basket, a 3-pointer from deep in the right corner, provided a 79-58 Catawba lead with 11:30 to go. The Indians reached the 100-point mark for the fourth time this season when reserve Carter Phillips took a bounce pass from Taylor and sank a layup with 1:12 to play.

“I think we’ve always been unselfish and good at sharing the ball,” said Perron. “We’ve had six different kids lead us in scoring this year. Now we’re getting a feel for shot-flow. It’s all part of our growth.”

No one has grown more than Haskett, the team’s sixth man for the season’s first 18 games. Of course, he remains perfectly happy with the seating arrangement.

“It doesn’t matter if I started or came off the bench,” he said. “Either way, I’m bringing energy. Tonight the credit goes to all my teammates. Devin (Cooper) is very unselfish. He was penetrating, getting in the paint and spraying it to me. The least I could do was get him a few assists.”

NOTES: Taylor had a quiet game (7 points, 6 rebounds, 4 assists), but moved into sixth place on Catawba’s all-time scoring list. … Cooper had 14 points and six assists. He went 5-for-5 from the free throw line, four days after going 13-for-13 against Tusculum. Haskett added three assists and no turnovers. … Davis spent 14 years as head coach at nearby Pfeiffer University. He’s got 468 career wins. … Newberry was 6-for-29 on three-point attempts. … The Indians are idle until next Wednesday night when they host Wingate.