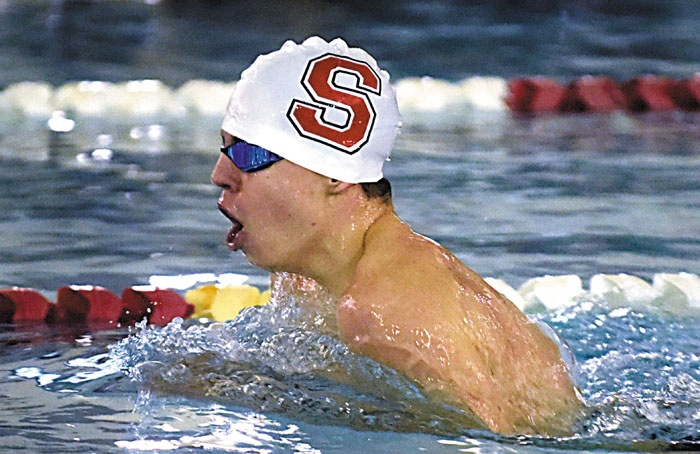 SALISBURY —  The drama came right away in the Rowan County swimming championships, with the 200 medley relay leading off the proceedings.

Contenders Salisbury and South Rowan had their studs in that event. Head to head. Both teams were all-in. The Hornets’ Roshen Amin and Roarke Burton stood next to South’s Cameron Hurd and Blaise Bumgarner.

They’d squared off twice in the 200 medley already this season, with each team winning once.

“We’d talked about it a lot,” Hurd said. “If we could win the 200 medley, we were going to win this meet. Someone was going to grab momentum that was going to last all day.”

South won it — by a second and a half — with seniors Christian Reynolds, Hurd, Bumgarner and Noah Severt getting it done.

“That was much needed,” Hurd said. “After we won the medley, I felt like I was on fire.”

South boys coach Jarrod Smith wasn’t counting any chickens, but he was brimming with confidence after that opening victory set the tone for all that followed.

“We knew coming in that we were going to take the 200 free relay and we knew Salisbury would get the 400 free relay,” Smith said. “The medley was the only relay that was in doubt, and those relay points are just huge.”

The same senior foursome won the 200 free relay for the Raiders, so that was 64 points, just from those two relays.

“Winning that first relay took a big load off my chest,” Bumgarner said. “It made the rest of my day a lot easier.”

Bumgarner’s day was fantastic. Named the meet’s most outstanding swimmer, he went 4-for-4. Besides the two relays, he was individual champion in the 200 IM and the 100 backstroke. His 58.78 clocking in the backstroke broke the county meet record set by West’s Jeff Dockins. That mark had stood for 18 years.

“That’s a record time that’s been a goal for four years,” Bumgarner said. “I’ve just kept working for it.”

Other keys to South’s victory?

Smith pointed at the 200 freestyle, another event that came early in the day, as a huge swing.

“We had two young guys in the 200 — Braxton Vagner and Harrison Ward — and we didn’t know what we’d get,” Smith said. “We’re hoping for fourth and fifth, but Braxton got second and Harrison got fourth. That was a lot of extra points we hadn’t counted on, and that kept our momentum going. Those early points gave us what we needed to hold Salisbury off and keep the lead. We know we’re always going to be stronger in the second half of a meet when we get to Bumgarner in the backstroke and Hurd in the breaststroke.”

Hurd, the elusive football receiver, defended his county title in the 100 breaststroke in exciting fashion, bobbing to the wall as a huge crowd screamed. He held off Carson’s surging Matthew Epley by an inch. Hurd couldn’t see Epley, but he could feel him coming on, and he could hear the roar.

“I just tried to stay focused on my lane and my time,” Hurd said. “We really needed the win.”

“We also put Jackson Deal in that event for the first time,” Smith said. “He got us four points for ninth. That’s the kind of team effort it takes to win championships.”

South took  a 23-point lead to the final event — the 400 free relay — and only a DQ could have cost the Raiders the championship. South’s “B” relay team of Ward, Harrison Shepherd, Corey Jiminez and Vagner placed third, and that was good enough for a 15-point margin of victory.

Salisbury put up a good fight.

Roarke Burton won the 50 free and 100 free, defending his titles in both sprints.

“I swam well in the conference meet Saturday and I came in confident of doing well in my events,” Burton said. “But Blaise Bumgarner had a great day.”

Burton made a spirited run at breaking the county meet record in the 50 and the 100, but came up a little short.

Salisbury also got a win from Amin, who defended his title in the 100 butterfly.

The Hornets ended the day with that victory in in the 400 free relay, with Amin and Burton teaming with Gabriel McLendon and David Holden.

Epley led a growing Carson team (65 boys and girls) that is likely to win its first county championships before much longer. Besides losing the thriller to Hurd in the 100 breaststroke, Epley repeated as county 200 freestyle champ.

Carson also got a win from 14-year-old Cooper Sever in the 500 free. He comes from a swimming family and is the brother of Taylor Sever, one of the standouts for Carson’s girls team.

There have been 20 county championships held. This was the 15th time the Raiders have won. West Rowan and East Rowan own one title apiece. Salisbury’s three titles include the back-to-back wins in 2017 and 2018.

“We got used to winning these things, but we’ve been finishing second the last few years, so it’s good to be back on top,” Smith said. “I’m happy for our team  and I’m thankful to have a co-coach who works as hard as Matt Perry does for our program.”

South will lose outstanding seniors, led by that quartet that won two relays.

“This was a last hurrah,” Reynolds said. “We came prepared to win today from the start. We had to do this.”