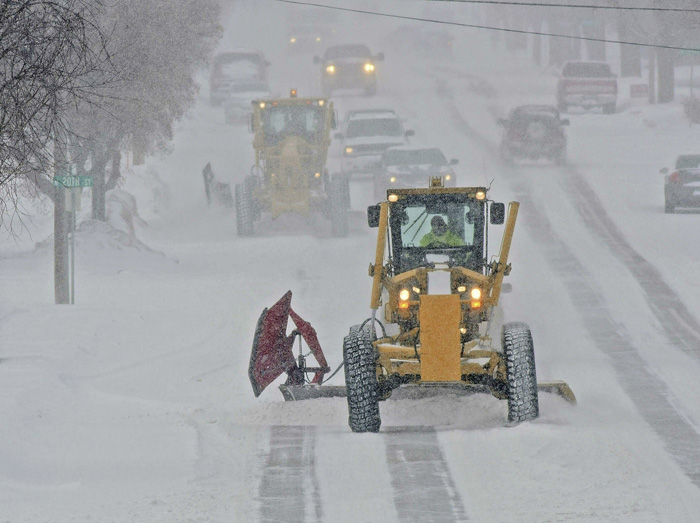 CHICAGO  — A winter storm started sweeping across the Midwest on Friday, leading to slick roads and runways, as it inched its way toward New England, where it was forecast to dump up to 2 feet of snow.

The National Weather Service issued winter storm warnings from the Dakotas, across the Great Lakes states and into New England. The weather service at one point warned that conditions in New England over the weekend “could approach blizzard criteria.” Ice was also a possibility in some areas in the storm’s path.

In Nebraska, where freezing drizzle was falling Friday afternoon, authorities closed Omaha’s Eppley Airfield after a Southwest Airlines plane slid off an ice-slicked runway. No one was injured. The airport suspended all afternoon flights.

In Iowa, the Department of Transportation warned that visibility was less than a half mile in many locations because of snow and wind. And in South Dakota, where snow was starting to pile up, authorities warned drivers to give plows extra room.

Chris Nace, who works at a Domino’s pizza in Sioux Falls, South Dakota, said several inches of snow had accumulated since early morning and the conditions were slowing down delivery drivers.

“The plows are just getting out,” he said late afternoon. “Just the main roads are cleared. They haven’t gotten to the side streets yet.” But drivers are used to such conditions, he added, and customers “are pretty understanding.”

The storm was expected to bring between up to 10 inches of snow to the Midwest before walloping the Northeast on Sunday. The National Weather Service in Albany, New York, said snow could fall at a rate of 1 to 3 inches an hour, creating “difficult to impossible travel conditions” in areas.

New York City is expected to see as much as 6 inches. Amtrak canceled some trains Saturday from Chicago to Washington and New York and between New York and Boston and Pennsylvania on Sunday.

Chicago is forecast to receive as much as 8 inches by Saturday and wind gusts in the Chicago area are expected to reach 35 mph.

Bitterly cold air was expected in the storm’s aftermath.