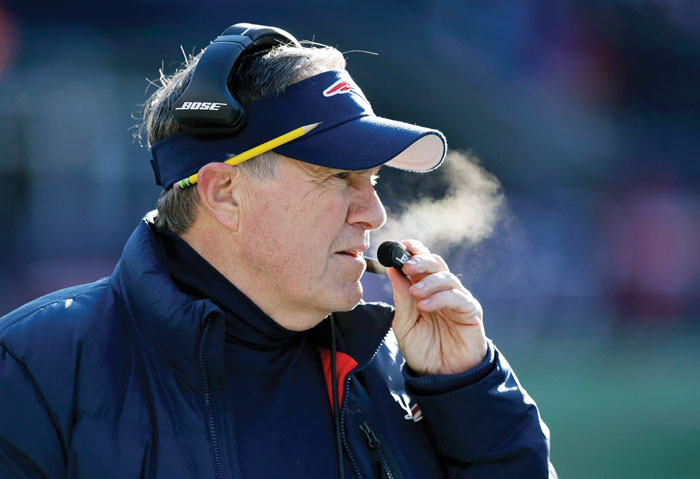 FILE - In this Dec. 30, 2018, file photo, New England Patriots head coach Bill Belichick watches from the sideline during the first half of an NFL football game against the New York Jets in Foxborough, Mass. The Patriots have dominated the AFC for nearly two decades _ if not the entire NFL _ and the coach-quarterback combination of Bill Belichick and Tom Brady will be playing in their eighth conference title game Sunday when New England visits the Chiefs at frigid, hostile Arrowhead Stadium. (AP Photo/Charles Krupa, File)

By KYLE HIGHTOWER, AP Sports Writer
FOXBOROUGH, Mass. (AP) — The Patriots are going on the road again in the playoffs, a place that hasn’t always been kind to them during the Tom Brady era.
New England was unbeatable at home this season, going 8-0 during the regular season and rolling past the Los Angeles Chargers in the divisional round.
Playing outside of Massachusetts has provided different outcomes. Brady is 8-4 in AFC championship games with a 6-1 record at home. But he’s just 2-3 on the road in the conference title game, with both wins coming at Pittsburgh during 2001 and 2004 seasons. New England was 3-5 in games away from Gillette Stadium during the 2018 regular season.
The Patriots enter Sunday’s AFC title game at Kansas City trying to become the first team since the 1990s Bills to reach the Super Bowl after losing it the previous season. They haven’t won a road playoff game since beating the Chargers 24-21 in the divisional round of the 2006 season.
The Patriots lost to the Colts on the road in the 2006 AFC title game and twice at Denver — in the AFC championship game during the 2013 season and again in the 2015 AFC title game. New England has played the rest of its 22 playoff games since 2006 at home or a neutral field in the Super Bowl.
“It’s tough to beat the No. 1 seed on the road. That’s the reality, just like we’re tough to beat at home when we’re the No. 1 seed,” Brady said this week. “It takes a lot. It takes a lot of good football. It takes a great complementary game. All three phases have to be on point. We’re going against a team that scores a lot of points.”
They will also have to deal with what could be the coldest temperature for a game in Arrowhead Stadium history. An arctic blast is forecast for Kansas City.
Patriots linebacker Dont’a Hightower said his focus will be on trying to contain the NFL’s top scoring offense and not the thermometer.
“It’s definitely one of the hardest places to play. But, at the end of the day, it just comes down to executing It comes down to football and executing plays,” Hightower said. “They’re a high-powered offense and they’re real good on defense, so obviously defensively, we’re going to have to eliminate big plays.”
The Patriots opened the week as a three-point underdog, the first time in 68 games, including playoffs, that Brady didn’t enter a week as the favorite.
The previous time Brady wasn’t the favorite was on Sept. 20, 2015, at Buffalo. The Pats were two-point underdogs that day and won the game 40-32.
It’s why Chiefs coach Andy Reid is expecting Brady and the Patriots’ best effort on Sunday.
“They’re a heck of a team, so I don’t get caught up in all that,” Reid said. “You’re talking about a dynasty, if there is such a thing, in the National Football League. They’ve been that. You’re talking about a head coach that I think the world of him, I think he’s a great coach. He’s done a phenomenal job keeping that thing together. We’re getting ready to get their best shot, offense, defense and special teams.”
Brady didn’t hide his thoughts for the Patriots’ critics in the aftermath of their divisional-round win over the Chargers, commenting, “I know everybody thinks we suck and, you know, we can’t win any games.” But he tried to downplay being officially cast in the role of underdog this week.
“It doesn’t change much for us, but it just kind of shows you what people think about what our chances are. That’s about it,” Brady said.
At least one of his teammates didn’t play it quite as coyly.
Receiver Julian Edelman posted #BetAgainstUs on his Twitter account accompanied with a video that featured highlights of the Chiefs’ season. The montage ends with shots of Brady and Edelman from New England’s comeback win in overtime from a 25-point deficit in the Super Bowl against Atlanta in the 2016 season.
So, is being an underdog motivation or not for the Patriots?
“If you’re not motivated this week you’ve got a major problem,” Brady said. “This is the week where you shouldn’t have to put anything extra in. This is what it’s all about. You sign up any chance you get to play in the AFC championship game, so I don’t care where, when, time, cold weather, rain, blood. It don’t matter.”
___
More AP NFL: https://apnews.com/NFL and https://twitter.com/AP_NFL
___
Follow Kyle Hightower on Twitter at http://www.twitter.com/khightower