All of 17, Anisimova of US scores upset at Australian Open 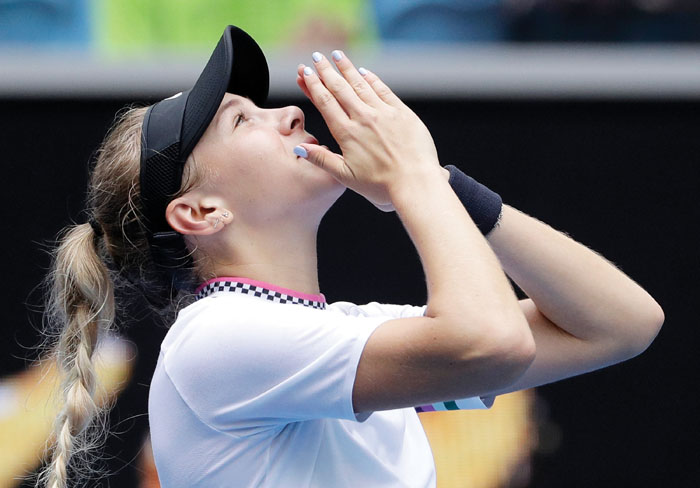 By HOWARD FENDRICH, AP Tennis Writer
MELBOURNE, Australia (AP) — All of 17, never the winner of a Grand Slam match until this week, Amanda Anisimova is making quite a first impression at the Australian Open.
Anisimova showed precisely why there are those who consider her a possible future star, producing one spectacular shot after another Friday to upset 11th-seeded Aryna Sabalenka of Belarus 6-3, 6-2 and reach the fourth round.
“I want to win this tournament,” Anisimova said, tapping her right index finger on a table for emphasis at her post-match news conference. “Right now.”
She is the youngest American to get this far at Melbourne Park since Jennifer Capriati in 1993 — and at any Grand Slam tournament since Serena Williams at the 1998 French Open. Pretty heady company.
“This is an unreal feeling,” Anisimova said. “I can’t believe that this is happening right now.”
Believe it, kid. She captured a ton of attention on Day 5, when defending champion Caroline Wozniacki was knocked out by 2008 champion Maria Sharapova 6-4, 4-6, 6-3. Another American woman, 35th-ranked Danielle Collins, joined Anisimova in earning a debut trip to the round of 16 at a major with a 6-3, 6-2 victory over No. 19 Caroline Garcia. Up next for Collins will be three-time major champion and former No. 1 Angelique Kerber, who needed less than an hour to overwhelm 240th-ranked Australian wild-card entry Kimberly Birrell 6-1, 6-0.
At the 2006 U.S. Open, when she was 19, Sharapova became the most recent teen to claim a Slam title. Anisimova grew up cheering for Sharapova — they now share an agent — and would love to match her feat of winning a major before age 20. Who would doubt her?
“I respect her a lot, because I think she’s young and has a great game. I mean, she’s really proving what she can do,” said Sharapova, who sat at the same table as Anisimova at their agent’s wedding last year. “She has a really bright future ahead of her.”
It’s not just that Anisimova, who was born in New Jersey and is based in Florida, has knocked off two seeded players already, including the hard-hitting Sabalenka, who was many a pundit’s pick for a deep run at Melbourne Park.
Or that she’s dropped a measly total of 17 games through three matches.
It’s the way the 87th-ranked Anisimova — there is no one younger in the WTA’s top 100 — is doing it, with clean and dangerous shotmaking and impeccable court coverage.
Take the shot — shot of the match? Of the tournament? Of the year so far? — that she produced at 3-0, 15-all in the second set.
It was a 12-stroke exchange in which Sabalenka held the upper hand throughout, steering Anisimova from corner to corner. It culminated with one sprint by Anisimova to her right for a forehand, then a sprint to her left for a backhand, followed by yet another switch of direction for a sprint back to her right. Her momentum carried her well wide of the doubles alley as she conjured up a “How did she do that?!” squash-like forehand that looped past Sabalenka and somehow landed in a corner for a winner, drawing raucous appreciation from the crowd at Margaret Court Arena — and an ever-so-slight smile from Anisimova.
“I’m really feeling good out here,” said Anisimova, who is coached by her father, as well as the same person who’s worked with her since she was 9. “I’m playing some really good tennis.”
That’s an understatement.
She delivered more winners than Sabalenka, 21-12, as well as fewer unforced errors, 13-9. Anisimova won all eight of her service games, saving the lone break point she faced. She broke the hard-serving Sabalenka four times.
Anisimova’s first trip to Australia, and third appearance in the main draw at a major, now progresses to Week 2 and a matchup against two-time Wimbledon champion Petra Kvitova, who beat Belinda Bencic 6-1, 6-4.
On a rainy afternoon that saw the roofs closed on the three main courts, and play delayed on smaller arenas, Sharapova advanced to face No. 15 Ash Barty of Australia, while 2017 U.S. Open champion Sloane Stephens beat No. 31 Petra Martic 7-6 (6), 7-6 (5) and now meets Anastasia Pavlyuchenkova of Russia.
In the men’s draw, Roger Federer dispatched one youngster and set his sights on facing another.
The 37-year-old Federer, seeking a third consecutive title in Melbourne, dismissed 21-year-old Taylor Fritz of the U.S. 6-2, 7-5, 6-2. Federer now takes on 20-year-old Stefanos Tsitsipas of Greece, who eliminated Nikoloz Basilashvili 6-3, 3-6, 7-6 (7), 6-4.
“We all want them to win all the big stuff, but it just takes time,” Federer said about the newest generation of challengers. “I’m still giving them a hard time, sometimes.”
Also advancing was the man Federer beat in last year’s final, Marin Cilic. He overcame two match points — opponent Fernando Verdasco double-faulted one of them away — and erased a two-set hole to win 4-6, 3-6, 6-1, 7-6 (8), 6-3 in a contest that lasted more than 4 hours and ended just before 1 a.m.
Cilic, the 2014 U.S. Open champion, now faces No. 22 Roberto Bautista-Agut, a 6-4, 7-5, 6-4 winner against No. 10 Karen Khachanov.
Rafael Nadal beat 19-year-old Australian Alex de Minaur 6-1, 6-2, 6-4 and now gets 2010 Wimbledon runner-up Tomas Berdych.
Frances Tiafoe, an American who turns 21 on Sunday, got to the fourth round at a major for the first time by defeating Andreas Seppi of Italy 6-7 (3), 6-3, 4-6, 6-4, 6-3. Tiafoe now meets No. 20 Grigor Dimitrov, who is being coached by Andre Agassi.
___
Follow Howard Fendrich on Twitter at http://twitter.com/HowardFendrich
___
More AP Tennis: https://www.apnews.com/apf-Tennis and https://twitter.com/AP_Sports