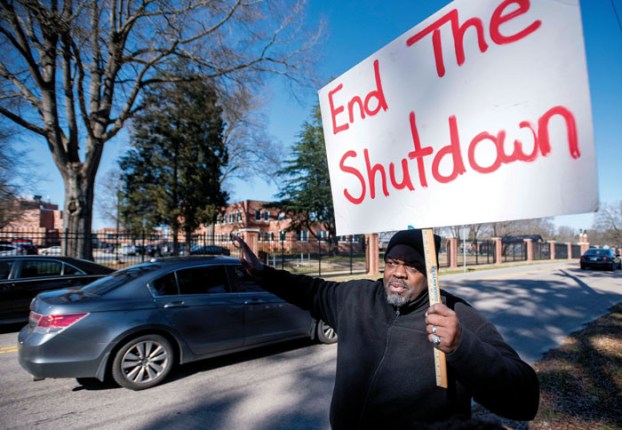 1. Even though employees of the Hefner VA Medical Center have not been financially affected by the federal government shutdown, there were pickets outside the hospital Thursday calling for an end to the shutdown. What group did the protesters represent?
A. American Federation of Government Employees
B. Local Army National Guard unit
C. Rowan County Democratic Party
D. U.S. Department of Agriculture

2. Whom did the Spencer Board of Aldermen appoint to the town board to fill out the term of Alderman Kevin Jones, who was elected to the Rowan-Salisbury Board of Education?
A. Howard White
B. Jonathan Williams
C. Jody Everhart
D. Buddy Gettys

3. The Salisbury City Council is one of many community partners in the Rowan County Local Re-entry Council. What does is the goal of the council?
A. Try to attract recent four-year college graduates to Salisbury and pair them with open jobs with Rowan County employers
B. Make sure recent community college graduates receive the additional training needed for specific job openings
C. Identify high school dropouts and provide the means for them to return to school or earn a high school equivalency diploma
D. Provide help for men making the transition from prison to becoming productive members of society

5. Salisbury police have filed an initial charge against the driver of a tractor-trailer that hit at least seven cars in the Aldi parking lot Jan. 4 and caused damage to the store. What is the charge?
A. Driving while impaired
B. Crossing the center line
C. Careless and reckless driving
D. Operating without a license

6. Because of anticipated construction connected with Bell Tower Green in downtown Salisbury this spring, Pops at the Post won’t be held at the Salisbury Post. Where is the new location?
A. The lawn of Omwake-Dearborn Chapel at Catawba College
B. The lawn of the Dr. Josephus Hall House on South Jackson Street
C. Robertson Gateway Park on West Innes Street
D. The Back Shop at the N.C. Transportation Museum

8. What did the city of Salisbury recently donate to Rowan-Cabarrus Community College?
A. A water tank that had been taken out of service in an older part of town
B. A firetruck
C. A police car
D. A city bus

SALISBURY — Phyllis Loflin-Kluttz’s office at Ellis Park has the feel of a sports museum or hall of fame. It’s... read more