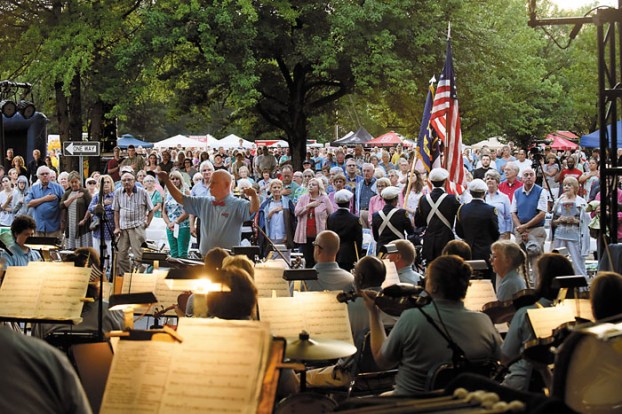 Pops at the Post temporarily moves to Transportation Museum

SPENCER — This year’s Pops at the Post concert will move to the North Carolina Transportation Museum while work starts on downtown Salisbury’s Bell Tower Green project.

David Hagy, conductor of the Salisbury Symphony Orchestra, announced the relocation plans Tuesday evening at the Spencer Board of Aldermen meeting, saying the concert would be held June 1 in the museum’s Back Shop. He asked town board members for Spencer’s support by providing police security, use of the Park Plaza parking lot, barricades, and assistance with trash and recycling.

“We would be very fortunate to go forward with this,” Gobbel said. “It will be big for the town of Spencer.”

The concert can’t be held at its usual location, with crowds gathering on South Church Street and parking lots adjacent to the Salisbury Post offices, because the parking lots will “hopefully be a muddy mess,” said Jason Walser, director of the Blanche and Julian Robertson Family Foundation.

Depending on when the foundation can begin soliciting bids for construction, work on Bell Tower Green should begin in April or May, Walser said. Once complete, the park will be a sort of central park for downtown Salisbury.

What’s more, the Back Shop location means there’s no need to plan for rain, as the concert will be held indoors.

“We think it’s going to be sensational in Spencer and at the Transportation Museum,” said Pops at the Post board Co-Chair Audrey Eudy.

One challenge will be adjusting to the acoustics in the Back Shop. Sounds are likely to bounce around in its cavernous interior, Hagy said. Sound engineers for the concert will work to minimize any echo during the performance, Morris and Hagy said.

Mark Brown of the Transportation Museum said Pops at the Post organizers’ desire to temporarily relocate works out well because the state has designated 2019 as a year in which state parks will make a greater effort to focus on music. And Hagy said this year’s performance will include some transportation-related compositions.

It’s possible that Pops at the Post may be held in Spencer for two years, as construction on the park is expected to last into 2020. But it’s unclear exactly when work will end.

Once the Bell Tower Green project is complete, however, Pops at the Post will return to its first home — the Salisbury Post.

“Our goal is to be back in 2020, but we have not had confirmation on park construction. So the return is largely dependent on when they get started,” Morris said. “We hope to have the inaugural Pops at the Post in the new park in 2020.”

In the interim, there’s still planning to do for this year’s concert. Eudy and Hagy said Pops at the Post may add to its name for 2019 and, possibly, 2020, but it won’t lose its tie to the Salisbury Post.

Pops at the Post began in 2005 as part of the Post’s 100th anniversary celebration. So many people came to see the Salisbury Symphony perform that it turned into an annual free community concert.

By Mark Wineka mark.wineka@salisburypost.com SALISBURY — When the 14th annual Pops at the Post concert started about 8:15 Saturday evening,... read more