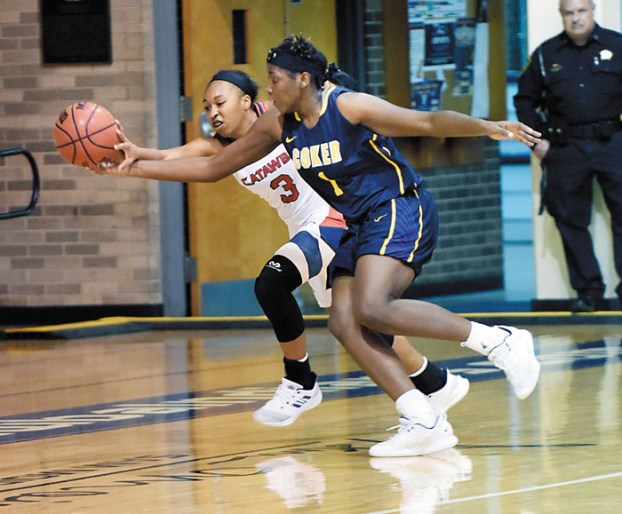 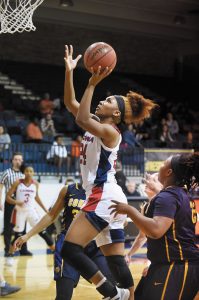 Those are the four pillars that first-year Catawba women’s basketball coach Terrence Baxter hopes to build his program on.

Catawba finally did all four things at the same time in the fourth quarter and pulled away from upset-minded Coker for a 70-54 South Atlantic Conference win on Wednesday night at Goodman Gym.

“That was mostly ugly,” admitted Catawba sophomore Taisha DeShazo who poured in a career-best 24 points. “We let them hang around and gave them a lot of confidence. Finally, in the fourth quarter we ran the floor the way we’re supposed to do and did what we’re supposed to do. We pulled through.”

It was still a struggle for the Indians (8-5, 3-3), who could ill afford to squander a home game against one of the SAC’s lesser squads if they hope to be a factor in the SAC race.

The final score was deceptive. Catawba was only ahead three points with 8:40 left when guard Madi Hallman made one of her two buckets with a tough runner in the lane. Catawba never led by double digits until Hallman fed Barnes for a bucket with 3:51 remaining.

DeShazo buried two early 3-pointers and sparked Catawba to a 16-15 lead after a quarter.

Stanback was  assertive in the second quarter. In one 40-second flurry, she took a charge, spotted Barnes for a layup and finished a coast-to-coast drive herself with authority.

“At times, it seemed like she was the only one working, the only one executing the things we’d talked about, and she just carried us,” Baxter said. “Shemya can score. She’s starting to realize that she’s not just a point guard — she’s a player. She just has to go out there and play.”

Normally reliable shooters Hallman and Elizabeth Webb combined for zero field goals in the first half. The Indians needed a buzzer-beating shot by Anna Gardner, a forward who comes off the bench, to get to halftime with a 35-32 lead.

“It was a tough, physical game,” Baxter said. “We knew it wasn’t going to be a walk-over. We just had to stay positive and keep grinding.”

The third quarter wasn’t a whole lot easier for the Indians because Hayley Kropp, a feisty guard who came off the bench for the Cobras (2-12, 1-5) was having a phenomenal night. She averages 5.9 but scored 24.

Finally, the Indians were able to achieve separation in the fourth quarter.

“We’re undersized, so it’s very important for us to play fast,” Stanback said. “We were finally able to tire them out some late in the game. We made them try to catch up to us.”

Catawba shot only 38.7 percent for the night and was a dismal 3-for-17 on 3-pointers, but the Indians held big advantages in the turnover column (25-14) and on the boards, where they had 17 offensive rebounds to Coker’s five.

Catawba’s 19-3 advantage in second-chance points was mostly due to Stanback. Despite being 5-foot-5, she grabbed eight of her 12 boards on the offensive end.

“We watched film and we knew they weren’t going to be boxing me out,” Stanback said. “I just had to keep hustling to the ball every time. I was able to sneak in there and get a  lot of rebounds.”

“Those are the four things we can do every night,” Baxter said. “Even when the shots aren’t falling for us,  we can do those four things. I’m really proud of these ladies for getting another win. They never complain. They just keep working.”

Catawba is home against Saturday against Lincoln Memorial at 2 p.m.