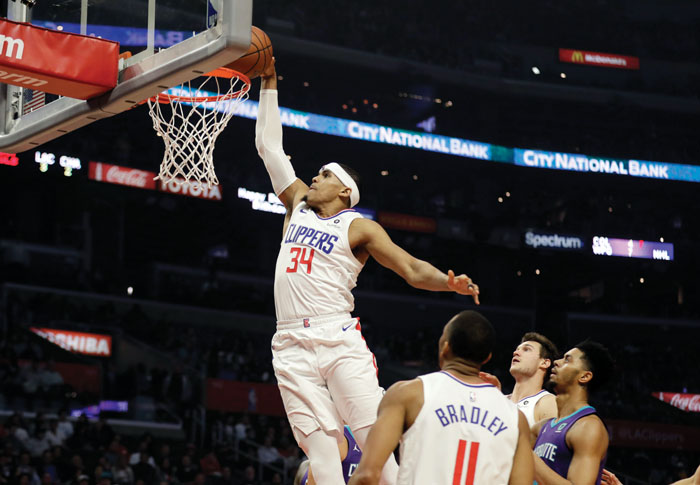 By BETH HARRIS, AP Sports Writer
LOS ANGELES (AP) — Lou Williams had 27 points and 10 assists, and the Los Angeles Clippers beat the Charlotte Hornets 128-109 for the ninth straight time at Staples Center on Tuesday night.
Montrezl Harrell added 23 points and 11 rebounds, Tobias Harris had 23 and Danilo Gallinari 20 in the Clippers’ third win a row overall.
The Hornets got within two early in the third before the Clippers took control for good. They closed the third on a 17-9 run, led by Harrell’s eight straight points, to take an 86-77 lead into the fourth.
Los Angeles stretched its lead to 20 points in the fourth on Williams’ basket after Gallinari’s 3-pointer. Avery Bradley and Williams hit back-to-back 3-pointers that extended the lead to 121-98.
Malik Monk scored 19 of his 24 points in the fourth for the Hornets, who fell to 5-13 on the road with their fourth loss in six games. Kemba Walker, who leads the league in fourth-quarter points at 8.6, didn’t score in the period. He finished with 13.
Charlotte’s only lead was four points in the game’s opening minutes.
TIP-INS
Hornets: Their last win at Staples Center against the Clippers was on Feb. 28, 2009. … F-C Cody Zeller (right hand surgery) is still 4-to-6 weeks away from returning. … G Jeremy Lamb returned to start after missing three straight games with a right hamstring strain. He had 16 points.
Clippers: Manny Pacquiao helped toss T-shirts during a timeout and came over to Floyd Mayweather’s courtside seat to shake hands with his former foe on Filipino Heritage Night.
UP NEXT
Hornets: At Portland on Friday in the fourth of a six-game trip.
Clippers: At Denver on Thursday.
___
More AP NBA: https://apnews.com/tag/NBAbasketball and https://twitter.com/AP_Sports