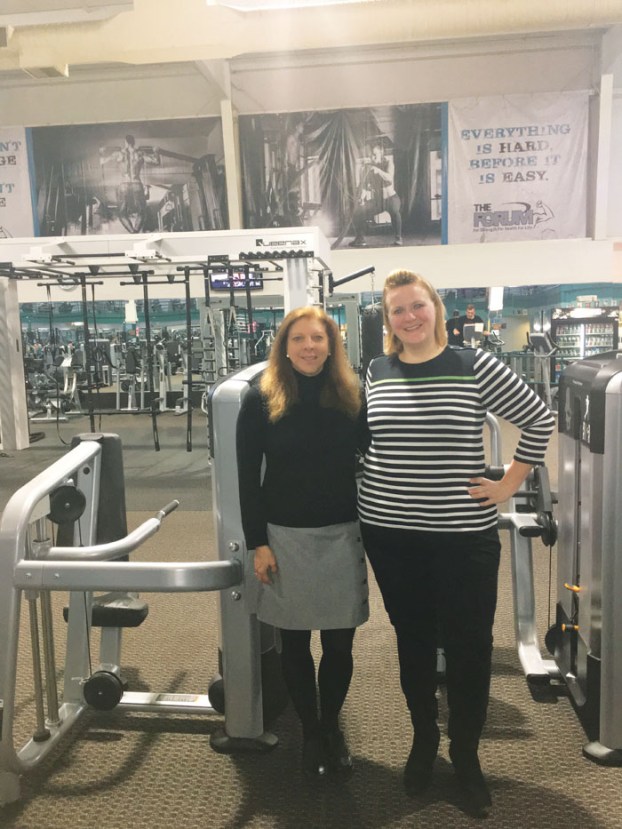 Karen Leonard (L) and Mary Burridge at the finish line of their wellness challenge. Submitted photo.

Early this past January, Mary Burridge and Karen Leonard embarked on their year-long journey to learn to exercise properly and improve overall wellness.
Roller coaster results happened along the way, with great months and some better forgotten. We entered December with specific year-long goals within reach.
Mary, project manager at Smart Start said, “December is a hard month just as much if not more so than November. It seemed like everywhere I turned there was food and I could only resist so much before giving in. Also, the month of December was extremely busy at work and home so my time at the gym often took a hit.”
Karen wanted to reach a net loss of 20 pounds for the year and finished at 4.5 down, although she actually gained 9 ½ pounds during the first two months and more later because of a medication issue.
Mary worked toward losing 50 pounds and finished out at 47. The best takeaways from the year were inches lost and percentage of fat reduced.
Ester Marsh, Fitness Director at the Hurley YMCA, found that Mary lost 31 ½ inches and 14 percent of her body fat. Karen lost 5 percent of her body fat and significant inches off her waist, legs and arms. Ester said, “I am really excited for Mary’s results and Karen now has a trained body as compared to untrained when she began. They both made awesome progress.” Karen significantly improved her strength as well.
What I hoped for was a difference in approach and the ladies taking control of their desire for better health. I asked both Mary and Karen what they learned and how they planned to proceed.
Mary said, “I have gained an all new understanding of food and what it does to our bodies. I tell people that I now have a respect for food and the power that it holds. I am ever conscious of my food choices and I actively think ahead to what repercussions will come from the food that I choose to put in my body. My goal is to exercise daily in some form or fashion. I want to be in the gym at least four days a week. I have also set a goal to participate in at least one race a month. I started the year off with the Resolution 5K benefiting Rowan Helping Ministries.”
Karen said, “I know that I have to watch my sugar intake, make a full-time effort to drink more water plus keep exercising.”
Both ladies will be working out on their own as they move into 2019. Mary said, “I would have preferred to have lost another 8 to 10 pounds but hope to within the next 3 months. It is important that I keep my goals attainable.”
Karen, just a few months removed from a heart health scare, said, “I want to continue on the same plan I have been on over the past year but my first goal is to not gain any of the lost weight back. One of the reasons I wanted to work with this program was because I kept gaining weight and could not lose any.”
The Post readers helped keep Mary going. She said, “I honestly feel that the only reason I made it was all the readers who were holding me accountable. If I thought about quitting, everyone who was following my story came to mind and I would push on. Most importantly, as I mentioned earlier, just staying cognizant of the food that I put in my body and the amount of exercise I get matters. It really is a mindset that has taken me a year to switch to but it’s a mindset that I am thankful for.”
Karen summed up the program: “The only choice is a life-long commitment. Meeting with David made a difference by the accountability and motivation to exercise regularly, thinking outside the box and trying new classes, programs and running. I was reminded that to be the best I can for others, I must take care of my own health.”

The 2019 participants for the Salisbury Post Wellness Challenge have been chosen. Teri Shaw from the City of Salisbury Parks and Recreation will join Philip Martin, General Manager at Chick-fil-A and pastor at Gold Hill Wesleyan. Look for details about them and their first month’s progress in early February.
Partners in the program along with the Salisbury Post are The Forum, the JF Hurley YMCA, Novant Health and various other local businesses.
See you in a month!

Mack Williams Just one more piece about Christmas lights this season, my humble stretching of those “12 Days,” at least... read more