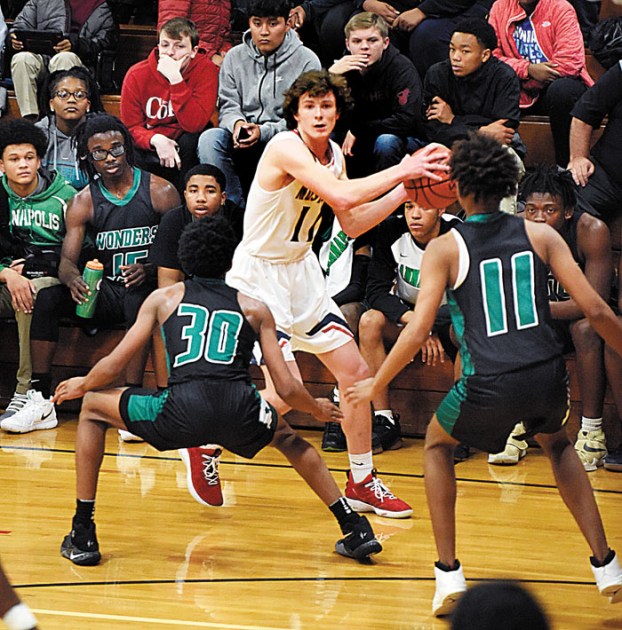 Wayne Hinshaw file photo/for the Salisbury Post ... East Rowan’s Gabe Hinceman (11) looks to pass against A.L. Brown on Nov. 29, during the first half of the game. The game was halted by scoreboard issues and resumed on Thursday night. East won the game, 60-55. 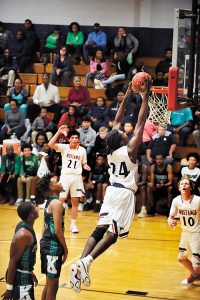 Wayne Hinshaw file photo/for the Salisbury Post …
East Rowan’s Elton Hooper (24) dunks against A.L. Brown on Nov. 29, during the first half. The game was concluded last night, with the Mustangs winning, 60-55.

GRANITE QUARRY  — East Rowan’s boys basketball team finished what it started over a month ago.

The Mustangs led 26-19 at halftime on Nov. 28 against A.L. Brown when the game was suspended by a scoreboard malfunction in Granite Quarry.

The teams resumed that game on Thursday, and East finished off a surprising 60-55 victory by holding off a fierce A.L. Brown comeback in the fourth quarter. The Wonders scored 32 in the final eight minutes but took their first loss of the season.

“I’m extremely excited for my guys tonight, but at the same time I’m very proud of them,” East coach Kurt Misenheimer said. “We controlled the tempo most of the second half and never lost the lead.”

A.L. Brown (10-1) came in with a lot of momentum. The Wonders had won a major Christmas tournament at East Lincoln with three victories and had moved up to a No. 28 ranking in the state (all classifications).

While the Wonders were rolling at East Lincoln, East (7-6) didn’t play especially well in the Dale’s Sporting Goods Sam Moir Christmas Classic, losing to North Stanly, edging West Rowan by two points and losing to Carson for a sixth-place finish in the eight-team field.

East had been flattened by a second half run by the Wonders 57-31 when the teams met in Kannapolis on Dec. 20, so there weren’t many reasons for optimism in the East camp, but the Mustangs managed to finish off their biggest win of the non-conference portion of the season.

Elton Hooper, a 6-foot-7 senior, had his second-best game of the season and scored 25 to lead the Mustangs. He scored his career high of 29 in Granite Quarry in December against Davie County.

“Elton created matchup problems for them, finished a lot of tough shots around the basket and knocked down some clutch free throws,” Misenheimer said.

East also got quite a few points from guards David Jordan (13), Gabe Hinceman (9) and Gavin Sprinkle (7).

Hinceman got all of his points at the foul line, where he went 9-for-10.

Amare Haynie, a 6-3 sophomore who was MVP of the East Lincoln Winter Jam, scored 19 to lead A.L. Brown. Kheni Briggs and Amari Grier scored 10 each.

East carried a 37-23 lead to the fourth quarter and was able to hold off the talented, but very young Wonders.

“Hands down, A.L. Brown is the fastest and most athletic team we’ll see,” Misenheimer said. “They’re a good team with some explosive scorers.”

High school track: Steele, Yeldell will be inducted into new Hall of Fame