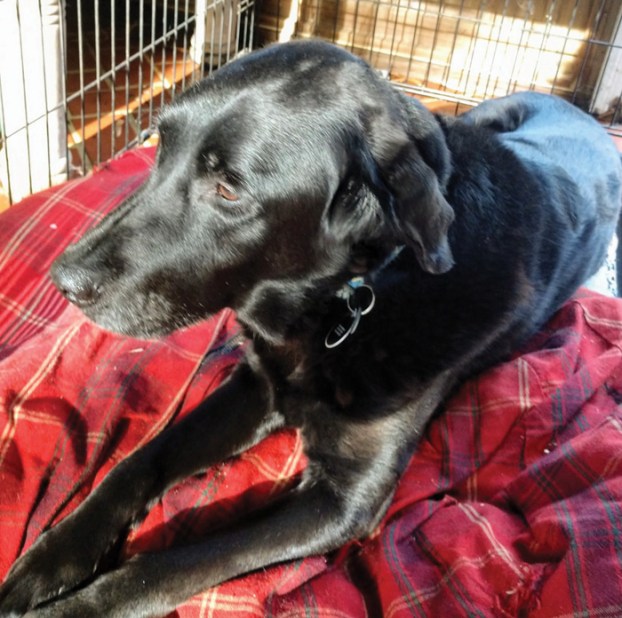 This is a story about a dog — a very good dog. And don’t worry, it has a happy ending.

It all started about 2 a.m. on Friday, Dec. 28, when Shooter, Brenda and Franco Goodman’s 10-year-old black Lab, put his paws on Brenda while she was sleeping. Then he went over to Franco’s side of the bed and did the same thing.

Back and forth he went.

The day before, Brenda had noticed that Shooter’s ears were folded back — an unusual action for this typically laid-back dog. Another thing was that he was sticking to Brenda like glue.

“I noticed wherever I went on Thursday, he was right beside me,” she says. “He was trying to tell me something.”

By the time he awoke Brenda and Franco at 2 a.m., she says, “he was shaking like he had a fever. I couldn’t decide why he was so anxious.”

So the dog wouldn’t keep both she and Franco awake, Brenda went to the den to sit with him. At 3:45, she posted about Shooter on Facebook. She was immediately flooded with questions from her friend Cara Reische.

Had he been afraid of storms? Could it be something he’d eaten?

No and no, were Brenda’s answers.

“He just can’t be consoled unless he’s right beside me,” she wrote.

As the night changed to morning, other friends shared concern. Brenda took Shooter to the vet first thing. And she noticed something.

When they returned, Franco told Brenda there’d been a smoke detector chirping in a seldom-used upstairs room. He’d changed out the battery and the noise — a noise only Shooter had been hearing — had stopped.

“I never had a dog go into stress more,” Brenda says, and now, she and Franco knew why.

Over the years, the couple have had four Labs: a brown Lab named Grover (her young sons, now with families of their own, named her after the “Sesame Street” muppet); a yellow Lab named Allie Mae (also named by the boys — Brenda called her the “redneck hippie dog”); Poker, who was Allie Mae’s son; and now Shooter.

Early on, Shooter was quite the handful.

“I’ve got beaucoup stories about him,” Brenda says, “but he’s always been so sweet. He was like, ‘Who, me?’ when he did something wrong.”

There was the time Brenda came home from a funeral — it was her birthday, Jan. 11 — so it was cold outside but it was frigid in the house. The normally back-lit thermostat had gone dark. Brenda called Beaver Brothers, and Tom Dryman, one of the servicemen, came to determine the problem.

“He comes to the door holding wires and cords,” Brenda remembers. “He says, ‘Your dog’s been chewing your lines.’”

While Tom was hard at work fixing the Goodmans’ thermostat, Shooter chewed the trailer hitch off his van. Six months later, Tom came to service the unit and unloaded 12 filters. You guessed it — when Tom turned his back, Shooter chewed every one of them up.

Another time, Brenda was busy unloading groceries. She came back to the car to find all the bags in disarray — and Shooter running around the yard with a pound of butter in his mouth.

She thought to herself, “He’ll be sick as a dog,” and started chasing him. She figures he ate about half of the butter before he finally dropped it.

And yet another time, Shooter managed to turn on the outdoor faucet — he’s chewed through numerous hoses — and the Goodmans came home to 2 inches of water on their patio.

“The next day, I bought a hose rack and hung it about 6 feet off the ground,” she says. “For good measure, I pushed the gas grill up against where the hoses were connected.”

You already know the rest of the story.

“A few days later, I looked out and thought, ‘Huh, what’s the dog doing on top of the grill?’” Brenda says. “He had ripped it all off. But you couldn’t get mad at this dog.”

Eventually, Brenda says, “Shooter calmed down to be the magnificent dog he is today. That dog loves us so much. He was trying to tell us something was wrong, and we couldn’t figure it out. That noise was causing him anxiety because we weren’t doing anything about it. We weren’t getting out of Dodge.”

Brenda loves Shooter, she says, “because he’s just so doggone kind and nice. He’s a good dog. I was humbled. Franco and I both were. That dog is so smart, and he thinks so much of us.

“As much as our dogs depend on us, we depend on them, too.”