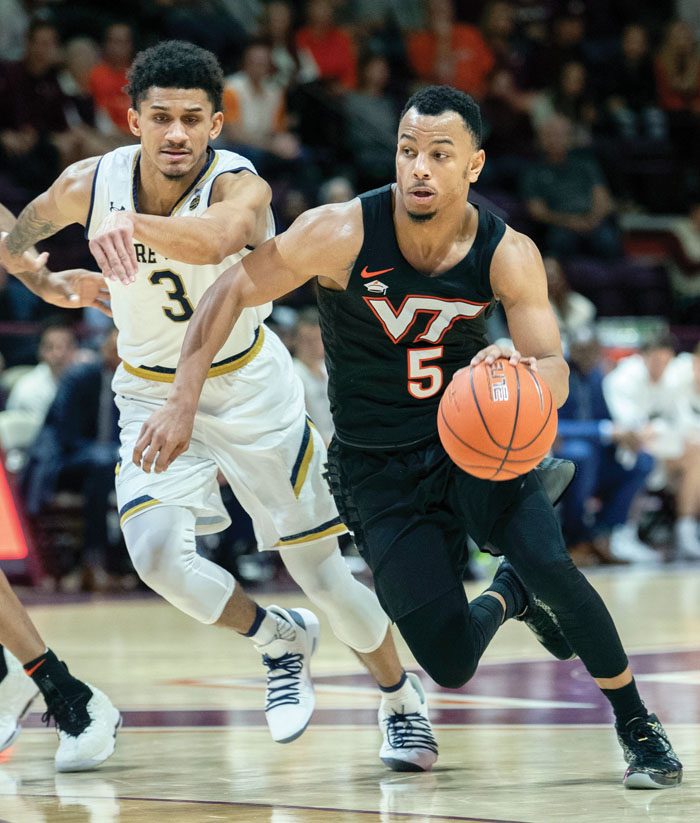 BLACKSBURG, Va. (AP) — Ty Outlaw hit the first 3-pointer, and it became his turn to carry the No. 10 Hokies in a game when four guys took turns.

“He fuels me and we feed off each other,” Outlaw said of Ahmed Hill, who made consecutive baskets before Outlaw’s first 3-pointer from the corner, right in front of the Virginia Tech bench, splashed through in an 81-66 victory against Notre Dame on Tuesday.

Outlaw hit three 3-pointers in a 22-9 run that allowed the Hokies to pull away, then added a fourth after Notre Dame closed to within 71-60 with 3:51 to play. Earlier, Hill hit a pair of 3-pointers after the Fighting Irish closed to within 43-42 with about 15 minutes to play.

The red-hot shooting made it low stress afternoon for point guard Justin Robinson, who scored just seven points but had eight assists, moving him past Jamon Gordon and into third place in program history with 521. Gordon had 514 between 2003-07.

“When you have four guys on the court with you that are not missing and they’re making every shot, you know that you just have to hit them at the right time in the right spot or call a play that you know where they’re tagging from and hit them,” Robinson said.

Kerry Blackshear Jr. led the Hokies (12-1, 1-0 Atlantic Coast Conference) with 21 points, Nickeil Alexander-Walker and Hill scored 17 apiece and Outlaw finished with 14. Virginia Tech led just 49-44 before Alexander-Walker sparked the run with a pair of driving baskets and Hill followed with two. Outlaw’s trio of 3s and one from Blackshear pushed the margin back to 18 and the Irish never got within 10 again.

“They’re old and they know who they are and they spread you out and make shots. Really, really good,” Irish coach Mike Brey said. “We’re kind of a youth movement group playing against men today. We gave ourselves some chances a couple times. Just couldn’t get over the hump on the road against a really good team. They made every big shot any time we kind of got within striking distance.”

Notre Dame: The Irish hurt themselves badly with nine turnovers in the first half, all coming before Virginia Tech had its first with 3:24 left in the half. The Fighting Irish finished with just 11 turnovers to seven for the Hokies, but they were fighting uphill virtually the whole game.

Virginia Tech: The Hokies’ continuing ability to shoot from downtown — they were 11 for 18 from 3-point territory — makes them a danger every time they take the floor, but it is their continuing attention to improved defense that stands out most this year. Virginia Tech has only allowed one opponent, then-No. 22 Purdue, to reach 70 points this season, and that came in an 88-83 Hokies’ victory.

“There are a lot of teams that have really good players, better than the players we have, but the symmetry and togetherness of the group is what I think is very unique.” — Virginia Tech coach Buzz Williams.

Virginia Tech: The Hokies remain at home to face Boston College on Saturday.