Mayor Heggins to NAACP: ‘The power lies with the masses,’ so activate it 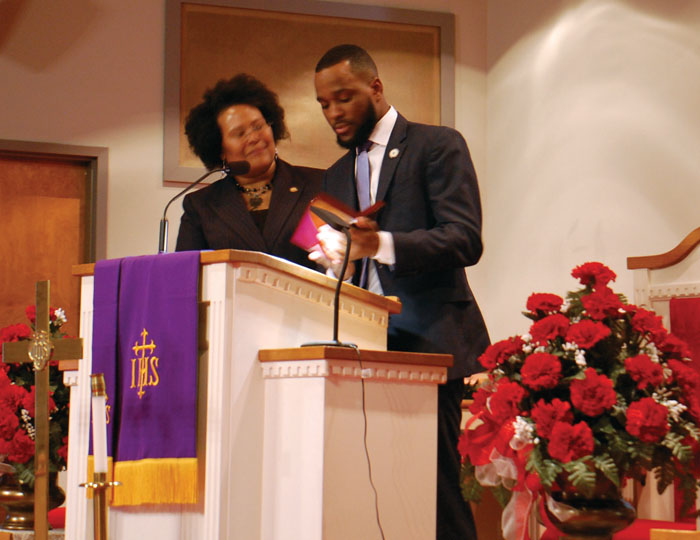 SALISBURY — Salisbury Mayor Al Heggins said Sunday it’s time to activate where the real power lies — with the people most affected “by what we know are unjust, unfair, unequal, divisive, oppressive practices, policies and laws.”

Heggins was the keynote speaker Sunday afternoon for the installation of officers of the Salisbury-Rowan NAACP Chapter. The program was held at Gethsemane Missionary Baptist Church on South Caldwell Street.

Heggins built on the NAACP theme of “Together Building Power” and said her challenge to the NAACP officers and members was to “get to work, together.”

“Together means working with, and not around, the people most impacted by poverty, systemic racism, xenophobia, homophobia, sexism, ageism and overcriminalization,” Heggins said.

“Building means not being afraid to engage and eradicate the oppressive systems that we know exist and rebuild them, because we know they’re torn up from the floor up.”

Heggins said “power” means not perpetuating the narrative that only those already elected, the financially wealthy and the Ivy League-educated have the power.

“The power lies with the masses,” she said, “and the masses are suffering from government shutdowns, capital greed, health care assaults and folks playing with the public education of our children.”

Heggins ended her rousing talk by asking those in the audience to stand and do a brief breathing exercise with her.

“Do you feel that?” she asked. “We are one, living, breathing organism. That is the power. Now activate!”

In her first run for Salisbury City Council in 2017, Heggins led the voting and was chosen mayor by her fellow City Council members.

“The vision and mission is clear,” Salisbury-Rowan NAACP Chapter President Gemale Black said. “The mayor has challenged us, and we accept the challenge.”

Black was sworn in Sunday for another term as chapter president, and he remains the youngest NAACP chapter president in the state. He called on the NAACP to have a presence in all towns, not just Salisbury.

Black touted a better relationship the NAACP has forged with the Salisbury Police Department, describing it as a partnership that gives the NAACP a seat at the table.

He also noted the NAACP’s growing cooperation with the Salisbury-Rowan Community Action Agency.

In his written notes to members, Black added, “We continue to build coalitions with our city/county officials to change the trajectory of our economics for minorities (and) have conversations with our school system to develop best practices and a thriving educational system for disenfranchised children throughout Rowan County.”

Heggins, who was introduced by her husband, Jerome, said she is always happy to be part of a conversation about strong collaborations, which in Sunday’s case was expressed by the “Together Building Power” theme.

“Does together mean we speak truth or not speak truth to those who are designated or seen as the power holders?”

Heggins acknowledged she also gets hung up on the word “power” and what it is, whose power is being recognized, is it static or changing and is the power really a willingness to speak truth to power?

The answers to many of these questions have to start on a personal level, according to the mayor, and being honest with one’s self.

“We must take an honest evaluation of our morals and values,” she said, adding people should determine their standards for what’s good, right and just.

Someone said out loud, “Forever.”

“Then why is it still that way?” Heggins asked.

She said it’s time to “turn the tide of economically depressed areas in our city.”

Here were some bullet points Heggins followed up with:

• “We do not accept any resident in our city living and dying in poverty. We stop blaming the poor.”

• “We use the moral analysis which aligns with our closest held beliefs and our constitutional rights to ensure justice for all.”

• “We’ve got to reinforce the wheel, with the spokes of unity being dedicated to serving and hearing those most affected by systemic racism, poverty, the war economy and ecological devastation.”

• “We call out oppressive systems and practices by identifying them, naming them and eradicating them.”

• “We work to dismantle unjust criminalization.”

• “We uphold equal protection under the law — whether it is federal law, a state law or a local ordinance — is nonnegotiable.”

• “Last but not least, we redefine what we conceded to as power and activate where the real power lies — with the people most impacted by what we know are unjust, unfair, unequal, divisive, oppressive practices, policies and laws.”

In his introduction, Jerome Heggins described his wife as a person who enjoys simple things, loves her family and cares for all people.

She hears a siren and hopes everybody will be OK.

She worries about the homeless and whether they are warm and have enough to eat.

She talks to police officers and city maintenance crews on the job and during some of their toughest times.

Heggins said his wife is easy to talk with but will give you her opinion, even if it’s not what you want to hear.

In thanks for Al Heggins being the keynote speaker, Black presented her with a clock, which he said she could put in her City Hall office.

Black also presented appreciation plaques to outgoing First Vice President Chris Sharpe, whom he described as his right-hand man, and Second Vice President Yolanda Woods, who is now next in line after Black in the chapter hierarchy.

Rocky Cabagnot, executive director of the Salisbury-Rowan Community Action Agency, swore in the officers and executive committee. A reception was held after the program in James L. Stowe Fellowhsip Hall.

The Salisbury-Rowan NAACP Chapter holds general meetings on the first Thursday of every month at Gethsemane Missionary Baptist.