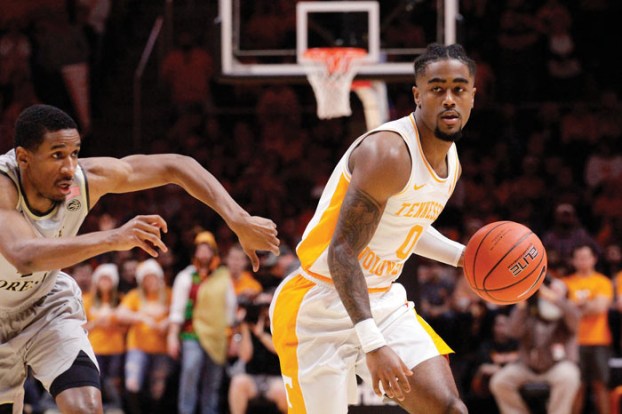 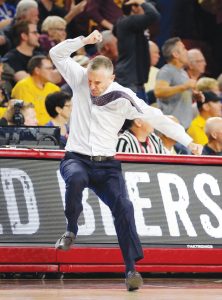 TEMPE, Ariz. (AP) — Rob Edwards scored 15 points and hit two free throws with 6.1 seconds left, setting off a wild celebration in the desert as No. 18 Arizona State knocked off No. 1 Kansas 80-76 on Saturday night.

The second No. 1 team to play in Tempe drew a star-studded crowd, with Michael Phelps, Jason Kidd, Grant Hill, Eddie House and Arizona governor Doug Ducey among the third-largest crowd (14,592) in school history.

Arizona State (9-2) struggled hitting shots around the rim and stopping Kansas preseason All-American Dedric Lawson while falling behind by nine.

Like Arizona State did while beating Kansas a year ago, the Sun Devils rallied late, using a 10-0 run to go up 76-74 with 90 seconds left.

Kansas tied it on two free throws, then Arizona State’s Remy Martin hit a pull-up jumper with 58 seconds left. The Jayhawks (10-1) fumbled the ball away for a backcourt violation on the next possession and Edwards hit the two sealing free throws for Arizona State’s second win over a No. 1 team. The victory set off a massive celebration inside Wells Fargo Arena as the students poured out of the stands onto the court.

The Jayhawks played their fourth straight game without big man Udoka Azubuike due to an ankle injury, failing in their first true road test by not making enough plays down the stretch.

Arizona State pulled off the upset in Lawrence last season, knocking off the No. 2 Jayhawks 95-85 during an undefeated nonconference schedule that led the Sun Devils into the NCAA Tournament for the first time since 2014. Arizona State entered the rematch with two losses in three games, to No. 6 Nevada and at Vanderbilt.

KNOXVILLE, Tenn. (AP) — Grant Williams had 22 points and 10 rebounds as No. 3 Tennessee trounced Wake Forest for its sixth consecutive victory.

Kyle Alexander scored a career-high 19 points and had eight rebounds to help Tennessee (10-1) extend its home winning streak to 15 games. The Volunteers haven’t lost at Thompson-Boling Arena since last season, falling 94-84 to Auburn on Jan. 2.

Jordan Poole and Isaiah Livers scored 11 points each for Michigan. Lavelle Scottie led the Falcons (4-7) with 16.

Nathan Knight scored 22 points for William & Mary before fouling out.

Martin’s big shot helped bail out the Wolf Pack (12-0) after another poor performance from beyond the arc. Nevada missed its first nine 3-point attempts, capping a 19-for-88 stretch going back three games.

Doughty and Wiley were two of five players to score in double figures for Auburn (10-2). Chuma Okeke had 17 points, Harper finished with 12 and Bryce Brown added 11.

Murray State trailed by only three points at halftime and took the lead early in the second half before Auburn went ahead for good with 13:11 to play.

The Billikens shot only 30 percent — their season low, and the best effort yet for Florida State’s defense.

The Seminoles (11-1) won their sixth game in a row and matched the best 12-game record in school history. Saint Louis (8-4) suffered its most lopsided loss of the season.

Javon Bess had 16 points and Carte’Are Gordon scored 14 for the Billikens.

CHICAGO (AP) — C.J. Jackson scored 20 of his 22 points in the second half, and Ohio State handed UCLA its third consecutive loss.

Kaleb Wesson had 15 points and 12 rebounds for the Buckeyes (11-1), who have won five in a row since its only loss of the season last month against Syracuse. Ohio State got its second win at the United Center this season in the opener of the CBS Sports Classic.

Kris Wilkes had 18 points and seven rebounds for UCLA (7-5), which was coming off consecutive losses to Belmont and Cincinnati.

Happ finished with eight rebounds for Wisconsin (10-2). He is the 15th player in Big Ten history to reach 1,000 rebounds.

JACKSON, Miss. (AP) — Quinndary Weatherspoon scored 14 points and went 5 of 6 from the free-throw line in the final minute as Mississippi State held off Wright State for its eighth straight victory.

Morgan finished with 10 points, 10 rebounds and 10 assists, joining Steve Downing against Michigan in 1971 as the only Indiana player to accomplish the feat. Downing did it with points, rebounds and blocks.

Indiana (11-2) went 6-0 in December, the first time the Hoosiers have gone undefeated in a calendar month since November 2012.

Zach Sellers had 18 points for Savannah State (3-11), which has lost seven in a row.

Nebraska (10-2) won its 18th straight home game, a streak dating to last season. Isaiah Roby had 20 points for the Cornhuskers.