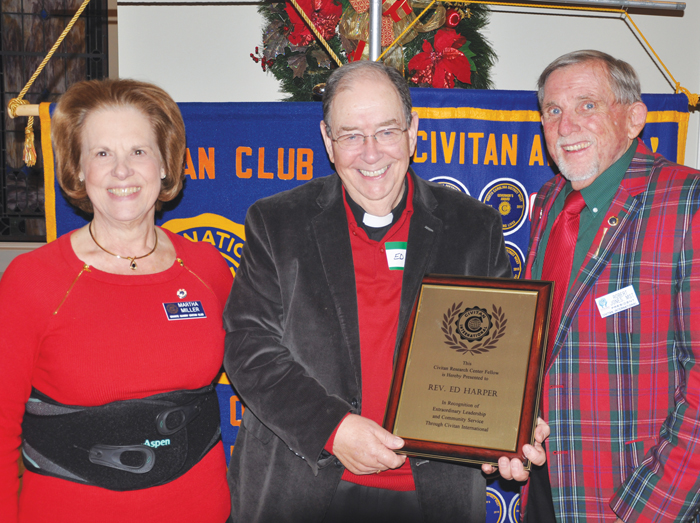 Submitted
GRANITE QUARRY — Rev. Ed Harper was honored by being named a Civitan Research Center Fellow at the Granite Quarry Civitan Club’s annual Christmas Family Night celebration on December 6. International President Bob Jones presented the award to Rev. Harper. In his remarks, President Jones noted that Rev. Harper had been a member of the club for more than 10 years and during that time had served as Club Chaplain. Jones also said that Rev. Harper has been interim Pastor of Haven Lutheran Church for about 10 years as well. He has been active in the community of Granite Quarry and the Chestnut Hills area. Rev. Harper was instrumental in chartering the Chestnut Hills Neighborhood Association, a group honored by the Historic Salisbury Foundation with a Historic Preservation Award. As Club Chaplain, Rev. Harper has looked upon the Granite Quarry Club as another congregation to be served. He can be seen visiting hospitalized members and helping console members when tragedy strikes. Rev. Harper has been an ordained Lutheran Pastor for over 50 years. He is a fixture at Club projects such as the Fiddlers’ Convention and various fundraisers done in conjunction with the East Rowan and Rowan Early College Junior Civitan Clubs.
The Civitan Research Center is located on the campus of the University of Alabama – Birmingham Medical School. It is a world-class research center centering on developmental and cognitive disabilities and has been involved in finding several breakthrough treatments for them.
The Granite Quarry Civitan Club is open to anyone in the Granite Quarry area and meets on the first and third Thursday at the Legion Building in Granite Quarry at 7 p.m. The club email address is gqcivitan@bellsouth.net and the club webpage is www.facebook.com/gqcivitan.