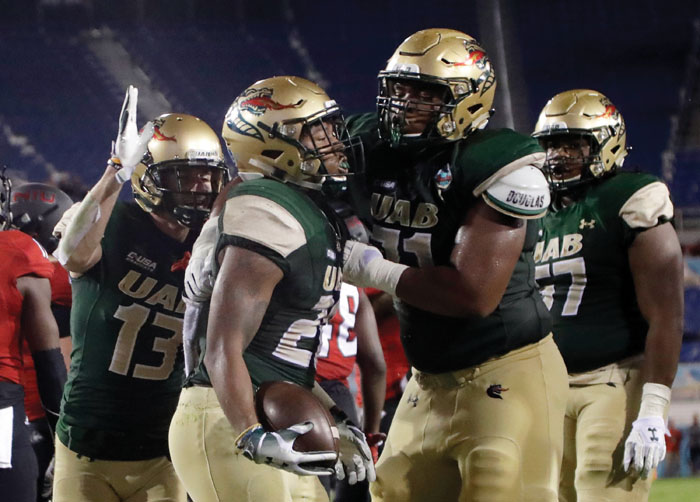 BOCA RATON, Fla. (AP) — Tyler Johnston III threw for 373 yards and four touchdowns, three of them to Xavier Ubosi, and UAB continued its resurgence two seasons after shutting down its football program, beating Northern Illinois 37-13 in the Boca Raton Bowl on Tuesday night.

Ubosi had seven catches for 227 yards for the Conference USA champion Blazers (11-3), who got their first-ever bowl victory in three appearances. UAB played in its second consecutive bowl since the program was reinstated after the self-imposed hiatus.

Johnston, who took over the starting job for the injured A.J. Erdely at midseason, set career highs in passing yards and touchdown passes, and Ubosi’s 227 yards were the third-most receiving in a game in school history. Ubosi came into the game ranked second in the country at 21.8 yards per catch, and his TD receptions covered 70, 46 and 66 yards.

All-American Spencer Brown, who entered with 1,167 rushing yards and a school-record 16 touchdowns, caught a 3-yard shovel pass for a score and had 78 yards on the ground.

UAB’s 10th-ranked defense harassed Huskes quarterback Marcus Childers, sacking him five times and forcing two fumbles (one lost). He finished 22 of 29 for 179 yards and had 35 yards rushing on 18 carries.

Johnston hit Ubosi in stride for a 70-yard TD just 18 seconds after the opening kickoff. After a penalty on a punt gave the Blazers a fourth-and-1 opportunity that they converted, the duo connected again with 5:11 remaining in the first half for a 24-10 lead.

The Huskies cut it to 27-13 early in the third, but a little over two minutes later, Johnston found Ubosi down the sideline for his third score.

Northern Illinois will be losing 6-foot-6, 320-pound left tackle Max Scharping, an NFL prospect who has started 53 consecutive games. Scharping is finalist for the William V. Campbell Trophy, given annually to the best scholar-athlete in college football.

UAB will be losing 35 seniors, including 15 starters. Ubosi has played his final game for the Blazers, along with four of five starting offensive linemen, both starting safeties, their middle linebacker and nose tackle. But Johnston and Brown have just begun their collegiate careers.