‘I want him to make it to at least 100:’ Daily workouts benefit both father and son 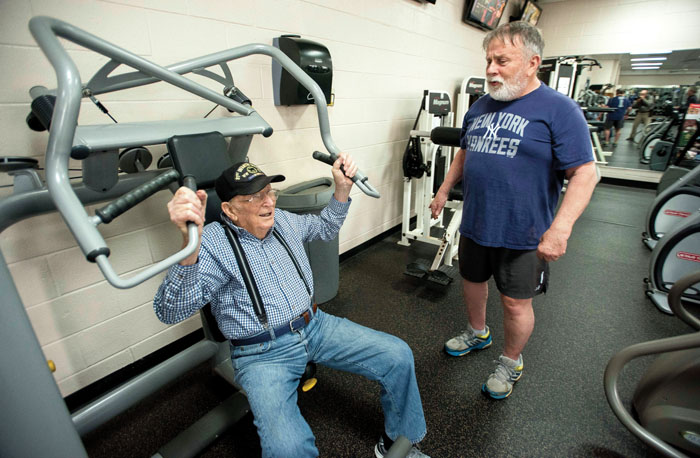 JON C. LAKEY / SALISBURY POST Phil Wise, right, and his 99-year-old father Winfred come to the J. Fred Corriher Jr. YMCA six days a week to work out in the weight room. The younger Wise helps his father move between weight machines, treadmills and at least one free weight bench.

Curtis Winfred Wise is 99 years old and works out six days a week at the South Rowan YMCA with his son, Phil. They would probably be there for seven days except that the Y is closed on Sunday. Associate Executive Director Aaron Crowe said, “We see them every day and its usually about 9:30 a.m. They have become favorites of the other Y members. Both are always so positive, upbeat and friendly.”

Phil Wise said, “I truly do want to see dad make it to 100 and then well past it. I found out from my insurance provider that I qualified for the Silver Sneakers program and later that dad did too. I lost 71 pounds but have gained some of it back. Being here is good for both of us.”

Silver Sneakers is a program available through most health insurance companies intended to keep senior adults active. Phil Wise, 74, weighed 275 pounds four years ago when he started exercising. He remembers going for a walk with his dad and grabbing an arm while asking, “Pop, slow down, I can’t keep up. Eventually, I found I needed more intensity in my workouts and experimented with raising the treadmill incline to 15 percent and pushing hard for 30 minutes. The big weight loss was the result. So, I know exercising helps.”

A resident of Kannapolis and a World War II veteran, Winfred Wise is fortunate not to have any real health issues even though he had a heart attack at age 70. Phil said, “Dad asks me every morning if we are going to the Y. He had an exercise bike and treadmill at home for years after the heart attack, but they don’t work as well lately. We know that we can challenge the whole body with the equipment here at the Y.”

While wearing his 81st Infantry Division cap, Winfred effectively moved through at least a dozen machines while Phil coached and encouraged him. He did the lat pull, the leg press while pushing 100 pounds, and then all the others while Phil set the weight and helped with proper positioning. They eventually moved on to the treadmill where Winfred easily maintained a 3 mph pace. Next came situps and, just as with all the other exercises, he had no problem completing the needed repetitions. Wise did struggle briefly on the bench press and even said, “I don’t think I can do it.” Phil helped him get positioned correctly and that exercise too was successfully completed.

Winfred easily followed his son’s lead and smiled often as they moved from station to station. Phil said, “He thinks I’m a slave driver because I keep him going. I like to ask him what he wants to do next and then we do it. Sometimes, I have to add more weight or more repetitions because he can do them.”

The pair usually include some walking in their routine, but Winfred doesn’t prefer walking around the perimeter of the gym. He does like the treadmill in the cardio area of the weight room that usually has more people around. Lifeguard Clayton Lewis said, “I see Mr. Wise in the weight room almost every day. To know that he is 99 years old is very motivating.”

There are a few constants to the workouts.  Winfred often does the first round of ten repetitions so well that Phil will ask for five more. Then Winfred counts them off easily and Phil says, “Are you ready to move to the next machine?” Almost every time, Winfred responds with “Not especially,” or “No, thank you,” then grins and quickly makes the transition.

Once the workouts are completed, Winfred and Phil walk out to the lounge near the front desk where Winfred enjoys relaxing and maybe a nap while Phil goes back for his own workout. Most days, they stop by Cracker Barrel for lunch on the way home.

Winfred Wise loves his time at the YMCA. He’s known as a jokester and a little bit of a risk taker. At age 95, Winfred got to drive a race car at the Richard Petty Driving Experience and said, “I was upset that I could only get it up to 94 mph.” But for now, he’s happy as can be just doing his workouts at the YMCA.