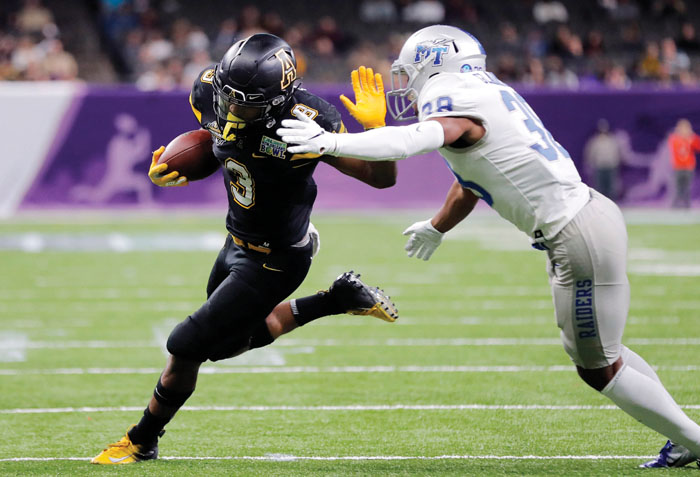 Camerun Peoples had a 63-yard touchdown run for the Mountaineers (11-2), which gave Appalachian State alum and former player Mark Ivey a victory in what might have been his only chance to coach his alma mater.

Taking over on an interim basis after Scott Satterfield left for Louisville, Ivey looked determined to make his lone game as interim coach a memorable one. He even called for a surprise onside kick in the first half. And it might have worked if Clifton Duck had not snatched the high-bounding ball a yard before it had covered the mandatory 10 yards for a legal touch by the kicking team.

That was about the only thing Ivey tried that didn’t work, but Middle Tennessee (8-6) could not take advantage of it. Three plays later, Tae Hayes’ interception and 27-yard return to the Blue Raiders 41. That set up Williams’ second TD passing after he’d taken a pitch from running back Darrynton Evans on a reverse the threw to Thomas, who’d sprinted to the end zone after the initial handoff.

Williams first TD came after he caught a backward pass from Thomas near the right edge of the field and launched a 30-yard strike down the sidelined to Thomas Hennigan.

Thomas didn’t throw his first touchdown pass until the final minute of the first half, when he found Henry Pearson from a yard out. In the second half, he hit Corey Sutton or TDs of 17 and 11 yards. He finished 15 of 24 for 177 yards and was intercepted twice by safety Reed Blankenship.

Middle Tennessee’s Brent Stockstill finished 25 of 37 for 330 yards, one touchdown and two interceptions.

Middle Tennessee: Stockstill was under constant pressure from an Appalachian State defense that had allowed fewer than 16 points per game coming in. He was hit as he threw his second interception and was sacked six times. And the Blue Raiders couldn’t get their ground game going, finishing with just 62 yards rushing.

Appalachian State: The Mountaineers finished with 448 total yards, including two runs of more than 60 yards. Evans’ 62-yard run set up Thomas’ first TD pass and stood as the third-longest run in New Orleans Bowl history until it was eclipsed by Peoples’ blazing scoring run down the right sideline. Evans finished with 108 yards.

LAS VEGAS (AP) — Ronnie Rivers rushed for 212 yards and two touchdowns, Anthoula “Tank” Kelly had a 70-yard interception return for a touchdown and No. 19 Fresno State beat Arizona State 31-20 in the Las Vegas Bowl on Saturday.

Marcus McMaryion rushed for a touchdown and was 15-of-29 passing for 176 yards to help the Bulldogs (12-2) set a school record for wins in a season. He also threw two interceptions.

ORLANDO, Fla. (AP) — Darius Bradwell rushed for a career-best 150 yards and two touchdowns to lead Tulane to its first postseason victory in 16 years, a 41-24 win over intrastate rival Louisiana-Lafayette in the Cure Bowl.

Justin McMillan improved to 5-1 as the Green Wave’s starting quarterback, tossing a first-quarter TD pass to Terren Encalade and running for a late score while accounting for 217 yards total offense — 145 passing and 72 rushing.

Georgia Southern took over at its own 25 with a triple-option offense that attempted fewer passes than every FBS team but Army. Werts completed a 15-yard pass to tight end Ellis Richardson, but Georgia Southern fittingly covered most of the 52 yards with runs.

ATLANTA (AP) — Lamar Raynard passed for 292 yards and two touchdowns and Malik Wilson returned a kickoff for the game-sealing touchdown for North Carolina A&T in the Celebration Bowl.