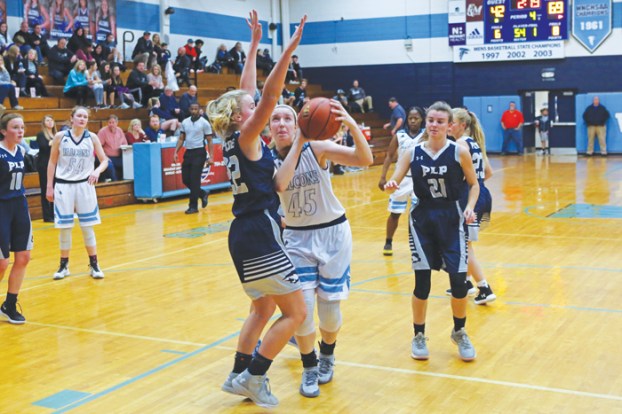 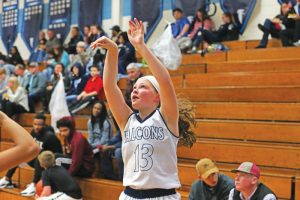 MOUNT ULLA —West Rowan’s girls basketball team continues to gobble up its season one victory at a time.

“A win’s a win,” coach Ashley Poole said. “We need to work on playing our style of basketball no matter who we play. We like to be quick. We like to feed our post. And whenever our guards shoot like they did tonight, it’s a pretty good night.”

The Falcons wasted little time warming up in the bullpen against Pine Lake (1-4). They used first-quarter 3-pointers by Taylor Poole, Mary Sobataka and Gabby Blabon to surge ahead in the opening four minutes. “We were passing the ball really well,” Blabon said, after finishing with 12 points. “We’re a strong team that’s working well together right now.”

West was strongest when it stuck to Poole’s blueprint. The Falcons played a tight, man-to-man defense for the first time this season. And their backcourt players contributed 17 points as they constructed a 25-5 lead after one period. In the second, authoritative junior Abigail Wilson muscled for a layup and then hit a 15-foot set shot. By the time junior Cindy Connolly jumped off the bench and drained back-to-back 3-balls, the Falcons owned a 40-11 edge late in the first half.

“We took this game as a chance to improve ourselves,” said Wilson, the game’s top scorer with 20 points. “Our goal was to move without bouncing the ball and work for the easy, open shot.”

West led by as much as 58-25 when Sobataka drilled a 3-pointer from the top of the key with 10 seconds remaining in the third quarter.

Senior Meaghan Reidy scored six of her team-best 12 points in the fourth quarter for the guests.

“We’re a young team with a lot to learn,” said first-year Pine Lake coach Scott Fitzgibbons, a former UNC Charlotte player. “In the first half, we played, worrying about what they were going to do, instead of worrying about ourselves. But West Rowan is a good team. They share the ball. It doesn’t bounce much when they run their offense.”

If nothing else, the victory made a nice stocking-stuffer, with the Christmas tournament just 12 shopping days away.

“It was a chance to try things we’ll need to know down the road,” Coach Poole said. “A lot of my girls have known each other since second grade. They played through middle school and now that they’re juniors and seniors … they’re a pretty good team. Experience goes a long way.”

By David Shaw sports@salisburypost.com MOUNT ULLA —West Rowan’s boys may be on the road to Good Enough, but they weren’t... read more