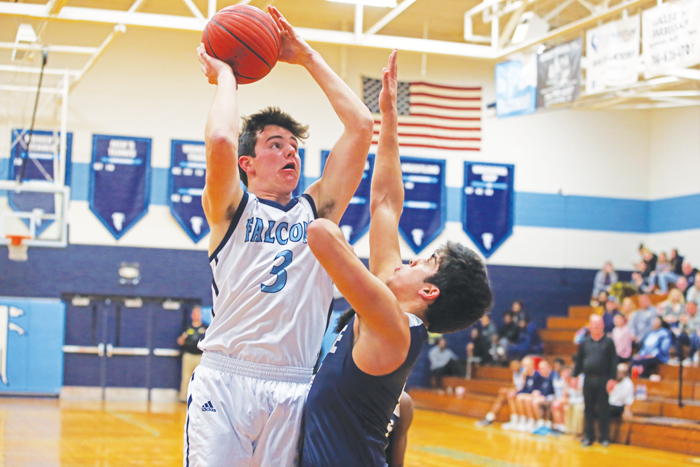 MOUNT ULLA —West Rowan’s boys may be on the road to Good Enough, but they weren’t good enough Friday night.

“I think we’re getting better,” coach Mike Gurley said, after West and its No-Name Defense suffered its sixth loss. “Tonight, when we could have folded the tents up like we did in our last two games, we fought through and gave ourselves a chance. ”

It was a chance that looked promising when guard Jay Joseph muscled down the lane for a layup that brought the Falcons within 56-55, with 41 seconds remaining.

“We got close,” said teammate Payne Stolsworth, the game’s high scorer with 21 points. “We came all the way back and just couldn’t finish. That’s been a problem in most of our games — finishing the last four minutes.”

Pine Lake (3-2), a Mooresville-based school that won 19 games and captured the PAC-7 championship last winter, wiped out a 12-6 first-quarter deficit and led, 28-23, at the half. By the time 6-foot-6 sophomore Greyson Houchins completed a three-point play with 3:19 left in the third period, the lead had bulged to 37-26.

“That’s a talented basketball team,” Gurley said. “They’ve got size, they’re quick and they’re well-coached. And we still had a chance.”

West stormed back with a 13-0 spurt late in the third quarter. There was Joseph’s spinning layup down the lane, then the first of three 3-pointers by Stolsworth. And when Davis Tadlock snatched a defensive rebound, drove the length of the court and hit a layup, the Falcons were within 37-33, with 2:30 to go.

“That shows we’re getting better,” said Joseph. “Our team as a whole just started to play and shots began to fall.”

West inched within a point when Stolsworth stuck a three from the left corner, then reclaimed the lead when his 20-footer from the right side caught nothing but nylon. “It was a little frustrating because we always had to know where (Stolsworth) was,” said winning coach Tony Dunbar. “But we gave him some good looks and the kid knocked them down.”

Pine Lake returned fire and built a 49-41 lead when senior Demarcus Johnson — a 6-5 transfer from Lake Norman — pulled up for a 3-pointer from the right side with 5:20 remaining. But again, the Falcons had an answer, this time using a spree that saw them draw to within 51-49, when Layton Butler buried a three with four minutes left. Their final charge brought them as close as one in the closing minute. Press-breaking layups by Pine Lake’s Grant Wagner and Johnson secured the win.

“In the last 30 seconds, I put in some ballhandlers, some tough kids,” said Dunbar. “They rebounded and finished it off.”

Jeriah Ford had 13 points for West and Joseph contributed 11. But the Falcons made only one-of-five free throws in the fourth quarter and went 4-for-10 overall.

“It’s a different game if we hit our free throws,” Joseph said. “We missed a ton. Not finishing games is getting very frustrating. We’re fighting for nothing if we don’t finish.”

NOTES: West has three difficult non-conference assignments next week: Monday at Mooresville, home against A.L. Brown on Tuesday and at North Rowan on Thursday.