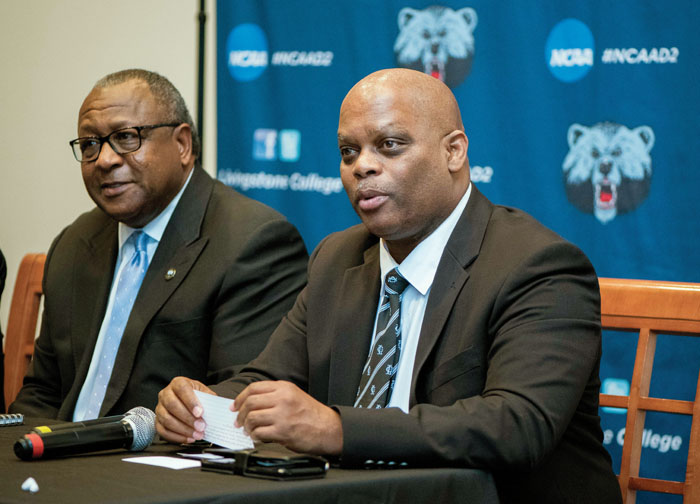 JON C. LAKEY / SALISBURY POST Livingstone College held a press conference on Friday to annouce that Lamonte J. Massie-Sampson, right, will become the new Athletic Director for the college. Massie-Sampson is replacing Andre Springs, left, who is stepping aside from the post because of health issues. Springs will continue as golf coach for the college. SALISBURY, North Carolina 12/14/18

SALISBURY – Andre Springs has announced his retirement as athletic director of Livingstone College, effective Dec. 31. He will remain as golf coach.

Springs, in his late 50s, explained that the dual positions were beginning to be too stressful.

“My doctor told me that I need to slow it down,” said Springs. “I’m always moving and I was always at all the events, trying to make sure that everything kept moving in a positive way. My medical issues are the reason why I move forward at this time and only coach golf.

“It’s a tough situation, because I love Livingstone and I’m sure everyone understands that, if you know me,” continued Springs. “But being an AD is a tough job, but it was also something that I loved and cherished, and I thank Dr. Jenkins for giving me that opportunity.”

Massie has been CEO and president of Valiant Global Solutions in Savannah. Valiant is a provider of IT hardware/software, cloud and telecommunications products to small and mid-sized businesses.

Massie kept his foot in athletics by coaching football at nearby Islands High School in 2017 and 2018.

Massie said that he was happy that Springs will be available to him.

“I’m honored that Coach Springs will continue to be an integral part of the athletic department as golf coach,” said Massie. “His experience, expertise and perspective will be very important for the direction of our program. Our transition started this morning (Friday) with a three-hour breakfast, where we shared a lot of information with each other.”

Jenkins acknowledged that he asked Massie to choose between football coach and AD in 2010, after a couple of sub-par seasons on the field for the Blue Bears. Jenkins figured that Massie would choose administration, but the coach still wanted to coach.

“Dr. Jenkins was very eloquent in explaining my departure back then,” laughed Massie. “I wasn’t doing that good as the football coach. Wins and losses have consequences, especially if you don’t have too many of the former. But hey, it was a learning experience and I’m a little older now, so I’ll leave the wins and losses to someone else.”

Massie said that his strategy for Livingstone athletics is to see student athletes through the entire college experience.

“My primary goals for the department will be the recruitment, matriculation, the retention and the graduation of our student athletes,” said Massie. “That’s the the path that we want to follow. We want to seek the best student athlete and we want them to stay four years, walk across that stage and be prepared for the world — to be a participating citizen and able to be successful in anything that they decide to do.”

Prior to coming to Livingstone as head coach in 2007, Massie was head football coach at Edward Waters College in Jacksonville, Fla. He has also assisted at Clark Atlanta and Corcoran High School (Syracuse, N.Y.).

Massie is a 1991 graduate of Tuskegee University with a bachelor’s degree in physics. He is also a Distinguished Military Graduate from Tuskegee University’s U.S. Army ROTC and a member of Alpha Phi Omega National Service Fraternity.

Massie, a Syracuse native, is married to the former Felicia A. Wright and they have two adult children, Erika and Jamel.

Springs left Livingstone for a career in golf course management and as a teaching professional but returned as golf coach and then, athletic director in July 2012. The Blue Bears have enjoyed success under Springs on the links and in the classroom.

“I love winning, whether it was our four CIAA championships on the course or the award for the highest team GPA in the conference (eight times),” said Springs, whose teams also won five CIAA Southern Division titles.

“Clearly, I am very pleased with the work that he has done here,” Jenkins said, of Springs. “His love for Livingstone has not dimmed at all and we look forward to his continued success with the golf program.

“Athletics has been one of our signature programs and we want to make sure the momentum of the successes continues,” added Jenkins. “Coach Massie was available to return and we didn’t want to spend two years with someone having to learn the institution before they can get going. This is a way to have a seamless transition. (Massie) knows this institution and one of the things I recognized in him when he was here before was his willingness to raise money and be involved in big projects. We all are anxious to do what is best for Livingstone College.”