More snow and sleet on the way, Weather Service says 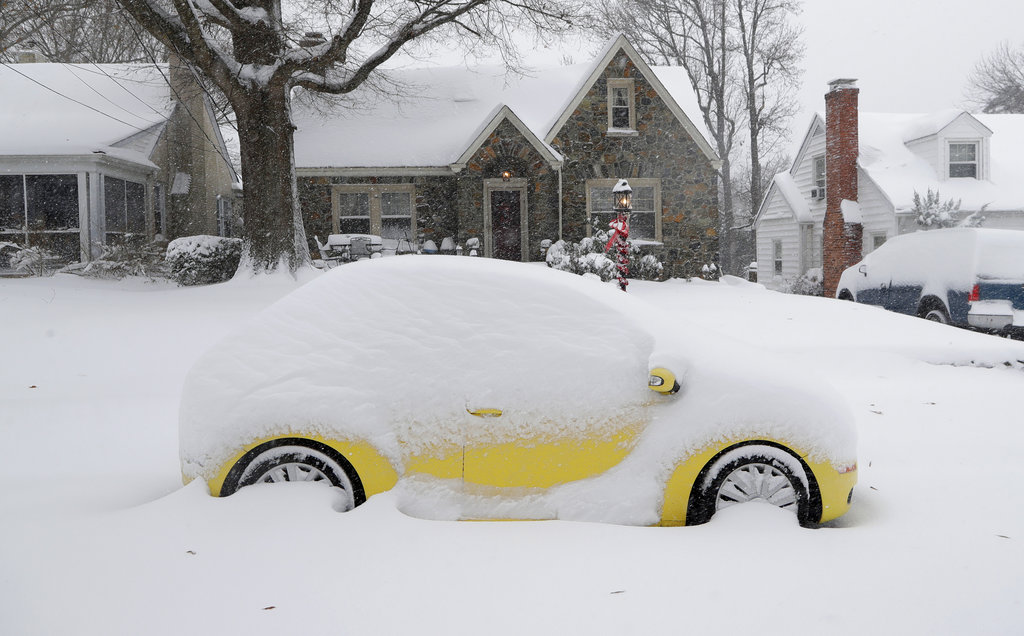 A snow-covered car is parked outside a home in Greensboro on Sunday. A massive storm brought snow, sleet, and freezing rain across a wide swath of the South on Sunday - causing dangerously icy roads, immobilizing snowfalls and power losses. (AP Photo/Chuck Burton)

SALISBURY — More snow is in the forecast for the region, prompting travel advisories and a state of emergency in North Carolina and Virginia.

Here’s the National Weather Service forecast for the next two days:

More than 1,700 flights were canceled Sunday across the United States. Nearly half a million people were reported without power in the Carolinas, Virginia, Tennessee, Alabama and Georgia. Duke Energy reported more than 240,000 outages in North Carolina and 170,000 in South Carolina on Sunday afternoon. In Virginia, Appalachian Power was reporting nearly 20,000 outages.

In York County, South Carolina, three men who were found unconscious and not breathing inside a home are believed to have died from carbon monoxide poisoning. Officials said they found a generator being worked on inside the home, according to The Associated Press.

North Carolina Gov. Roy Cooper urged residents to stay off the roads as the massive winter storm brought the state to standstill Sunday. Emergency crews, including the National Guard, had worked overnight to clear crashes on major interstates, Cooper said at a news conference Sunday.

The North Carolina Highway Patrol responded to more than 500 crashes and 1,100 calls for service Sunday and one tractor-trailer ran off a road and into a river, Cooper said.

In Virginia, state police responded to more than 140 crashes and dozens of calls for disabled vehicles across western, southern and central Virginia regions impacted by the storm. State Police said the snow was coming down faster than the state crews could keep up with midday Sunday that the interstate 81 in Washington County became impassable. Several tractor-trailers slid off the highway and other vehicles became stuck, police said.

Officials said they were concerned about freezing rain in Charlotte, North Carolina, and along the I-85 corridor and in the southern mountains. Ice accumulation was creating hazardous driving conditions and increasing the potential for more power outages.

“Enjoy the beauty, but respect the danger,” Cooper said. “This storm is treacherous, especially if you try to drive in it. Travel conditions are extremely hazardous. Don’t put your life and the lives of first responders at risk by getting out on roads covered with snow and ice.”

Amtrak canceled service to areas south of Washington starting Saturday and continuing through Tuesday. Some Northeast Regional trains are operating only north of Washington. The changes affect Auto Train, Silver Meteor, Crescent, Carolinian, Piedmont and Silver Star trains, among others.

Amtrak is waiving fees for travelers and said it will accommodate customers on other trains. Airlines, including American and Delta, said travelers can change their flights without penalties for travel to and from the region for trips Sunday and Monday. The severe weather is affecting airports in North Carolina, South Carolina, Tennessee and Virginia.

More than 300,000 power outages were reported across the region with the majority of those — about 240,000 — in North Carolina, according to poweroutage.us. Parts of Alabama, Georgia, South Carolina, Tennessee and Virginia also saw outages.

American Airlines also issued a travel alert for nine airports throughout the Carolinas, Tennessee, and Virginia, meaning passengers may be able to change travel plans without a fee.

Travelers were advised to check their flight status before heading to the airport. Cancellations were reported on flights from as far as the Midwest.

— From staff and wire reports