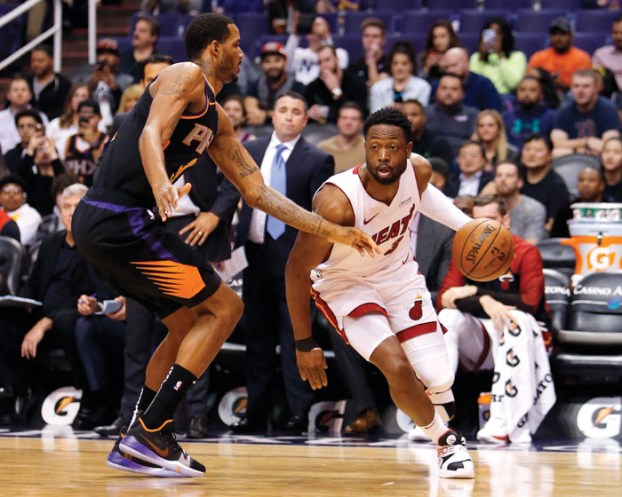 And he’s unsure what the milestone will mean.

Wade is in line to become the 15th active player to appear in 1,000 regular-season games, the milestone he’ll hit assuming he plays Saturday night when the Miami Heat visit the Los Angeles Clippers.

Heat coach Erik Spoelstra didn’t know Wade was nearing the milestone until earlier this week, and got wide-eyed when told that Wade had appeared in so many games.

Nobody has played in 1,000 regular-season games for the Heat — Wade has played the most, 893 after Friday’s game in Phoenix. But he’ll be the fourth person to play career game No. 1,000 while wearing a Miami uniform, joining Rashard Lewis in 2013, Shaquille O’Neal in 2007 and Danny Schayes in 1996.

“He’s showed an incredible amount of perseverance and resiliency,” Spoelstra said. “That might be one of the main things that I’ll preach and teach to young players, to be able to show the grit it takes. The second thing, which is just as important about Dwyane, is he reinvented himself and committed so much off the court so that he could perform and be healthy and play how he wanted to play.”

The 1,000th game is just one part of a most significant trip to Los Angeles for Wade.

His newborn daughter, Kaavia James Union Wade, is there with his wife Gabrielle Union, so the trip to L.A. is a chance for Wade to see them for the first time in a couple of weeks. And on Monday, Wade and LeBron James — both members of the 2003 draft class, longtime friends, then teammates in Miami and Cleveland — could share a court for the final time when the Heat visit the Los Angeles Lakers.

Wade and James will exchange jerseys after that game Monday. Wade has exchanged several with opponents already this season, but doing so with James will be particularly poignant.

“To be able to have that last matchup, I think for both me and LeBron, it’ll be cool,” Wade said. “We’ll have a moment at the end of the game to exchange jerseys and talk. When I decided that the jersey exchange was something I wanted to do, LeBron, Chris Paul and Carmelo Anthony were originally going to be the only guys I did it with. Then it took on a life of its own, but doing it with LeBron, it will be special.”

Wade owns most of the Heat career records, is No. 30 on the NBA’s all-time scoring list and has a legacy that was secured long ago.

The only stat he’s still chasing is blocks — he’s No. 2 on the all-time blocks list by a guard, looking up at only Michael Jordan and the 893 blocks he had in his legendary career. And in his 16th and final season before retirement, Wade — who has 857 — still has enough time to catch Jordan.

“I just want to see if I can get the block record,” Wade said. “Everything else, I’m good. I’ve got Heat records. I got to 20,000 points and all these things. Things like 1,000 games are so cool when they happen, but I don’t really focus on things like that. I’ve just been blessed enough to be talented enough, long enough, to do this.”