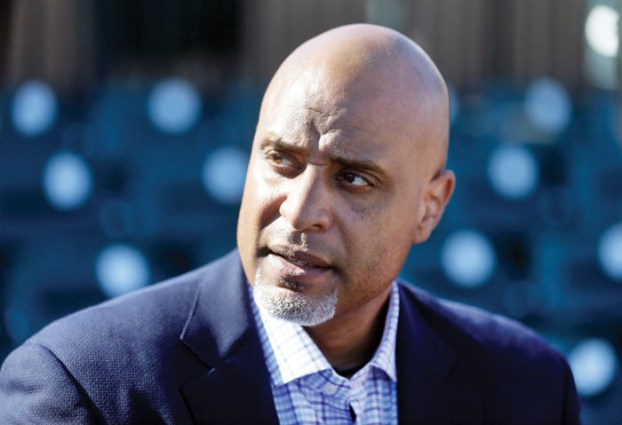 FILE - In this March 17, 2015, file photo, Major League Baseball Players Association executive director Tony Clark talks to the media before a spring training exhibition baseball game in Lakeland, Fla. Baseball players are concerned the Seattle Mariners have become yet another rebuilding team and may be joined by others. Union head Tony Clark and new collective bargaining director Bruce Meyer said Wednesday, Dec. 5, 2018 their members also are concerned about rapid change in the way games are played, such as the increased use of relief pitchers, and are willing to speak with management this offseason about whether counteracting changes are needed.(AP Photo/Carlos Osorio, File)

NEW YORK (AP) — Baseball players are concerned the Seattle Mariners have become yet another rebuilding team and may be joined by others following a season of steep attendance drops among clubs that faded early and never contended for the playoffs.

Union head Tony Clark and new collective bargaining director Bruce Meyer said Wednesday their members also are concerned about rapid change in the way games are played, such as the increased use of relief pitchers, and are willing to speak with management this offseason about whether counteracting changes are needed.

Altering the amateur draft to include an NBA-style lottery for the top picks, the 10-day disabled list and the 10-day minimum for the recall of players optioned to the minors are among the topics the union is prepared to talk about as part of a wider discussion. So are possible rules to counter offense-suffocating defensive shifts.

And the union maintains its agreement is necessary for any changes in anti-gambling rules in the wake of the Supreme Court’s decision that allows more widespread legal betting.

“We have seen some things that are eerily similar to last offseason,” Clark said. “One of the concerns in general has to do with the level of competition or interest in competition across the teams in general. … When you have teams who are as we’ve seen already moving considerable amounts of their roster and/or other teams who are talking about doing so, it raises concerns about how that’s going to affect the market.”

Players have taken to calling the process tanking, while management calls it the type of normal rebuilding that has been going on throughout Major League Baseball’s history. There were three 100-loss teams this year for the second time since 1985 and eight 95-loss teams for the first time in big league history.

MLB points to data showing 27 percent of teams had 90 or more losses in each of the last three years, a figured that has fluctuated between 20 percent and 33 percent since 2000.

“Last offseason, the union filed a grievance against four clubs that it claimed were not trying to win,” said MLB Deputy Commissioner Dan Halem, citing a case against Miami, Oakland, Pittsburgh and Tampa Bay. “One of those clubs made the playoffs, another club won 90 games and a third club was in contention through the trade deadline. I don’t think the players’ association has any credibility on opining on how clubs will perform.”

Attendance has gotten the attention of both sides. Toronto and Miami each had attendance drops of more than 800,000, Kansas City by over 500,000, and Baltimore, Detroit, Pittsburgh and Texas in excess of 400,000.

Baseball Commissioner Rob Manfred attributes part of the drop to unusual weather that led to 54 postponements, the most since 1989, and many more games played in cold. Players see lack of competitiveness as a bigger factor.

“We have teams … talking about a three-, four-, five-, six-year plans,” Clark said. “We saw how that manifested itself last year and have concerns about how it’s going to manifest itself this year.”

The union refused last offseason to agree to management’s proposal to install pitch clocks but did not block a new rule limiting mound visits that contributed to a 4 1/2-minute drop in the average time of a nine-inning game to 3 hours, 44 seconds. A wider discussion appears likely to take place this offseason.

Players are concerned about the drop in offense. The big league batting average dropped to its lowest level since 1972 at .248, strikeouts topped hits for the first time and defensive shifts increased by another 30 percent while innings and pitches per starting pitcher dropped again.

“To this point, there truly hasn’t been a definitive position taken on the ‘shift/no shift’ issue from among the player group,” Clark said. “But players thus far have been willing to talk about it as part of a much broader conversation.”

A lottery for the top draft picks could discourage some teams from rebuilding, which leads to losses, high selections that add top amateurs at relatively low prices and a path to success years later.

“There are a lot of pieces to the conversation. I think the draft is one of them,” Clark said.

Altering the disabled list or option recall rules could decrease the supply of fresh arms available to managers each game, which could start to reverse the increased use of relief pitchers. But players have benefited from the 10-day DL, which began in 2017; disabled players accrue major league service time along with their replacements, and that service time is needed to be eligible for salary arbitration and free agency.

“There’s an acknowledgment that it may be a part of the conversation based on what we’ve seen certain teams do over the last couple of years,” Clark said. “It has lent itself to more players getting more major league service as a result of that movement.”

Players also want to be part of the discussion of betting prohibitions. MGM Resorts International became MLB’s official gambling partner last week. MLB and club employees, including players, are prohibited from betting on baseball. MLB is considering updated policies that would prohibit them from causing bets to be made and from distributing confidential information that could impact betting, a person familiar with the discussions told The Associated Press last week. The person spoke on condition of anonymity because the policies were not final.

“There’s a number of conversations that are going to need to be had,” Clark said.

Oklahoma QB Murray is named the AP Player of the Year