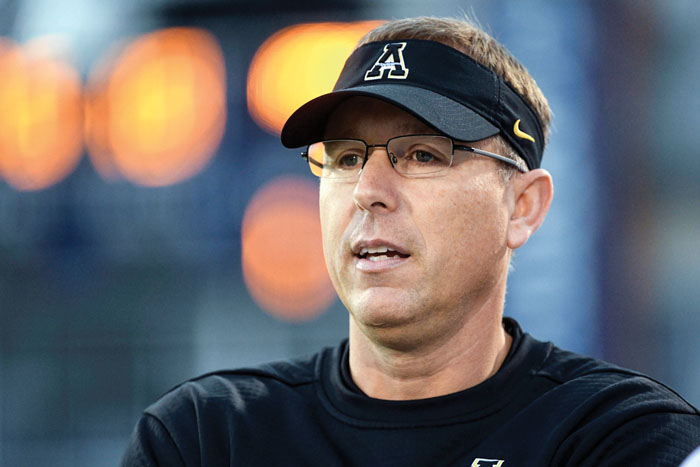 File-This Oct. 25, 2018, file photo shows Appalachian State head coach Scott Satterfield watches his team warm up before an NCAA college football game against the Georgia Southern, in Statesboro, Ga. A person with knowledge of the situation says Louisville has reached agreement with Satterfield to be the Cardinals next head football coach. The person spoke to The Associated Press Monday, Dec. 3, 2018, on condition on anonymity because neither the school nor Satterfield had publicly announced the decision. Louisville has scheduled a Tuesday afternoon news conference with a “special announcement” about the football program. (AP Photo/John Amis, File)

The University of Louisville Athletic Association unanimously approved the hiring of the former Appalachian State coach on Tuesday. Satterfield, who received a six-year contract with a base annual salary of $1.625 million and another $1.625 million for media obligations, was introduced at a news conference later Tuesday at Cardinal Stadium.

Satterfield was hired nearly a week after Jeff Brohm said he was staying at Purdue. The 45-year-old Satterfield guided the Mountaineers to a 51-24 record with three bowl wins in six seasons.

“I’m so excited to be here,” said Satterfield, who was cheered as he entered the club at Cardinal Stadium.

“We’ve had a lot of success over the past four years and there’s been opportunities, but this is the right one.”

Satterfield replaces Bobby Petrino, who was fired Nov. 11 after a 2-8 start to the fifth season of his second stint as coach. Lorenzo Ward lost the final two games as Louisville’s interim coach.

Satterfield will now compete in the Atlantic Coast Conference after leading App State’s successful transition from the Football Championship Subdivision to the Football Bowl Subdivision. The Mountaineers are bound for the New Orleans Bowl against Middle Tennessee.

Responding to questions about Satterfield’s ability to lead a Power Five program, Louisville athletic director Vince Tyra said, “I think he’s stepped up and will do it here.”

Satterfield’s task will be taking down Clemson in the ACC’s Atlantic Division, though the immediate focus will be getting Louisville back on the winning track after a sorry season in which it failed to beat a Power Five school and lost its final nine games.

Many of those defeats were blowouts, including seven in which opponents hung at least 50 points on the Cardinals. While that speaks volumes about the deficiencies of a young defense, the offense fell off drastically following the departure of 2016 Heisman Trophy-winning quarterback Lamar Jackson to the NFL.

Jackson’s mobility and dynamic play masked a lot of weaknesses that Louisville couldn’t hide this season. The Cardinals rank 111th nationally in total offense at 352.5 yards per game, while scoring average of 19.8 points is tied for 122nd.

By comparison, Appalachian State ranks 20th in scoring at 36.7 points per game and 42nd in total offense at 429.6 yards. The high-octane spread scheme made the Mountaineers successful even before they joined the Football Bowl Subdivision in 2014, with bowl wins in all three appearances.

But Satterfield warned against expecting a quick turnaround.

“It’s not going happen overnight,” he said. “I’m going to work extremely hard to make this work on a daily basis.”

Bryant released a video on social media that ended with a player in a Missouri uniform and fans chanting “M-I-Z” for its nickname “Mizzou.”

Bryant had visited several schools after he announced his transfer from Clemson because he was demoted as starting quarterback behind freshman Trevor Lawrence. Others he met with included Arkansas, Auburn, Mississippi State and North Carolina.

The 6-foot-3, 225-pound Bryant helped Clemson win an Atlantic Coast Conference title and reach the College Football Playoff in 2017. He started the first four games for Clemson this season before Lawrence took the starting job.

Bryant was 16-2 as Clemson’s starter. He threw for 3,263 yards, 15 touchdowns and nine interceptions the last two seasons.