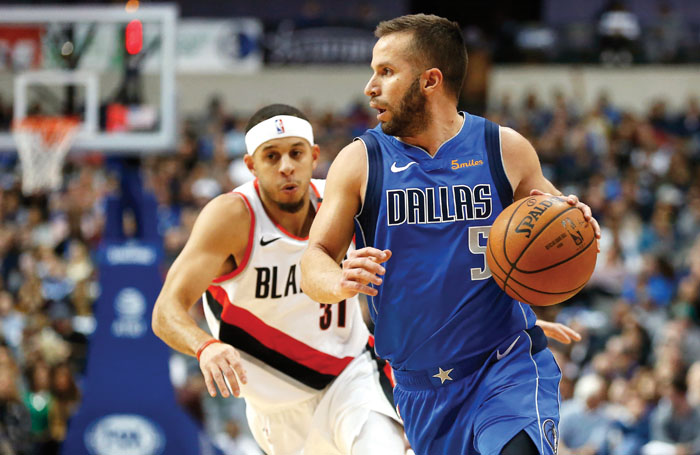 By The Associated Press
DALLAS (AP) — Luka Doncic scored 21 points and Wesley Matthews added 17 as the Dallas Mavericks won for the ninth time in 11 games, beating the Portland Trail Blazers 111-102 Tuesday night.
DeAndre Jordan added 12 points and 17 rebounds for Dallas, which won its eighth straight at home for the first time since its championship season of 2010-11.
Doncic, who missed his first game Sunday with a right hip strain, scored 14 in the second half and finished with nine rebounds.
Damian Lillard scored 25 of his 33 points in the second half as Portland tried, but failed, to rally from a deficit that was mostly double digits through almost all the first three quarters. Lillard and C.J. McCollum struggled from the field, going 17 for 42, and 4 for 15 from 3-point range.
PACERS 96, BULLS 90
INDIANAPOLIS (AP) — Myles Turner matched his season high with 18 points and added 11 rebounds and five blocked shots as Indiana spoiled the debut of new Chicago coach Jim Boylen.
Darren Collison had 23 points and eight rebounds, Bojan Bogdanovic scored 14 points and Tyreke Evans finished with 10 for Indiana. Domantis Sabonis added nine points and 11 rebounds off the bench for the Pacers.
Lauri Markkanen led the Bulls with 21 points and 10 rebounds. Justin Holiday, facing off against his brother, Indiana rookie Aaron Holiday, finished with 15 points. Chicago has lost seven straight games.
Boylan was named Bulls coach on Monday, taking over for the fired Fred Hoiberg, who was let go following a 5-19 start this season. Hoiberg had a 115-155 mark with one playoff appearance in three-plus seasons.
MAGIC 105, HEAT 90
MIAMI (AP) — Aaron Gordon scored 20 points and grabbed 13 rebounds, Nikola Vucevic finished with 19 points and 10 rebounds and Orlando beat Miami.
Terrence Ross added 19 off the bench for the Magic, who were 14 for 28 from 3-point range. Evan Fournier scored 13 and DJ Augustin had 11 for Orlando.
Justise Winslow scored 14 for Miami, which had won two straight — and still hasn’t had a three-game winning streak this season. Kelly Olynyk scored 13, Hassan Whiteside had 12 and Dwyane Wade and James Johnson each added 11 for the Heat.
Whiteside left the Heat bench with 40.5 seconds left and walked to the locker room. He didn’t play in the fourth quarter, and has been unhappy when that’s occurred in the past.
JAZZ 139, SPURS 105
SALT LAKE CITY (AP) — Donovan Mitchell scored 20 points and Rudy Gobert had 18 points and 10 rebounds to lead Utah.
Kyle Korver scored 15 points in his first home game since he returned to the Jazz, and Derrick Favors added 14 points as Utah won for the first time at home in nearly a month. The Jazz beat Boston 123-115 on Nov. 9, but have been on the road much of the season and haven’t found a rhythm at home.
Jakob Poeltl scored a career-high 20 points for the Spurs. DeMar DeRozan and LaMarcus Aldridge each scored 16 points for San Antonio, which fell to 1-13 when Aldridge fails to reach the 20-point mark.
KINGS 122, SUNS 105
PHOENIX (AP) — Buddy Hield scored 20 points, De’Aaron Fox had 16 points and seven assists and Sacramento coasted past Phoenix.
Seven Kings scored in double figures, including Bogdan Bogdanovic off the bench with 14 points. Sacramento has won two straight after losing its previous three.
Rookie De’Anthony Melton led Phoenix with a career-high 21 points. Trevor Ariza and Josh Jackson scored 14 each for the Suns, who fell behind 36-9 after the first quarter. Phoenix has lost six straight and nine of 10.
___
More AP NBA: https://apnews.com/tag/NBAbasketball and https://twitter.com/AP_Sports