Remembering Christmas past at the Price of Freedom Museum 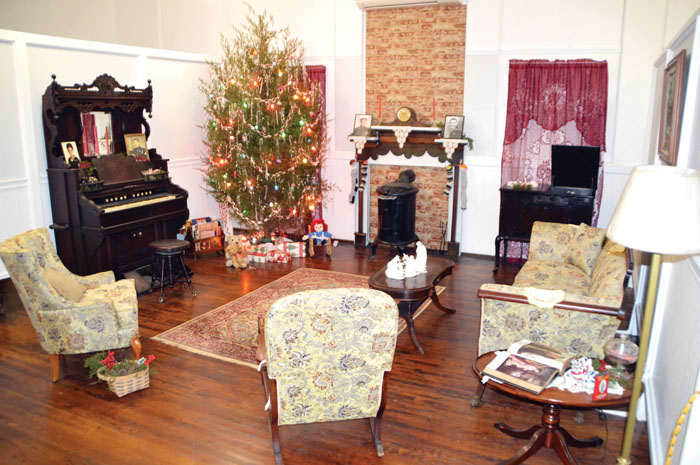 The living room of the World War II-era, three-room house at the Price of Freedom Museum is decorated for Christmas. Photo by Jeff McCorkle

CHINA GROVE — There was a time when folks celebrated Christmas burdened by thoughts of those fighting far away.

Memories of those times were revived during Christmas on the Homefront on Sunday afternoon at the Price of Freedom Museum.

Though the museum is usually open on Sunday afternoons, volunteers and visitors enjoyed live music by the Strings of Victory and much more at the military museum.

The World War II-era, three-room house within the museum was decorated for Christmas, and the recently restored Patterson School auditorium was open for the first time. Vintage Christmas items were on display in the “Do You Remember? Room,” and winter refreshments were served.

The auditorium had been used for storage until November 2017, when volunteer Bobby Harrison worked out a deal to remove the auditorium seats from Salisbury High School and move them to the museum.

“We found out on a Wednesday that we had to have them out by Friday,” said Harrison. “Keith Yount and Garin Kluttz got a 53-foot trailer, and we started on Thursday morning to remove the seats. All were out and loaded on the trailer by 10:30 a.m.”

“Once we had the seats, then we had to get the old school desks out of the auditorium,” Harrison said. “With that done in January, we found that the floor had significant termite damage and repair began in February. Don White guided us on the flooring repair. We worked two nights a week, then upped it to three nights during July and August. Roy Efird brought his commercial sewing machine and created a stage curtain from the old Salisbury High one. That machine was smoking after three hours of continuous sewing.”

Ceiling tiles, painting and wallpapering were coordinated by Eva Millsaps.

“They knew that I paint and hang wallpaper and I love old houses, so a lot of the detail work fell to me,” Millsaps said. “I love trim painting and decorating, so it’s not really work to me at all.”

“All the original ceiling drop lights still worked and the completely renovated auditorium was finished last Thursday, just ahead of the Homefront Christmas. It was truly a community volunteer project,” said Harrison.

Millsaps, who considers herself a full-time volunteer, said the museum was Bob Mault’s dream.

“It’s had prayer after prayer after prayer, and just look at it now,” she said. “He prays over how to do things the right way, and it has paid off. I just enjoy things from the past and am so glad that the Lord let me be involved here. The veterans are so appreciative, and we realize that they paid for all of it.”

Especially proud of the three-room house, Millsaps will design and maintain a backdrop behind the auditorium stage with different displays and paintings. The original motorized screen still works and will be used to show videos of local veterans talking about their service.

Artist John Hartley has contributed more than 100 military displays and paintings to the museum, most of them on stretch canvas.

“When I watched ‘Saving Private Ryan,’ I was hooked,” Hartley said. “I’m doing this to honor those that served and died for our freedom.”

Hartley demonstrated his painting for visitors.

Sonny and Barbara Coren of Concord enjoyed their time at the museum on Sunday afternoon.

“This place is about people and it is as American as it gets,” Sonny Coren said. “What is better than the Christian songs and all the displays here? We are so lucky to have this museum.”

Christmas on the Homefront continues at 3 p.m. next Sunday with music by the Efird Family Singers. Should bad weather develop, the program will be rescheduled to Dec. 16.

Either way, look for Mault, Harrison, Millsaps, Hartley and a bunch of other volunteers who will be glad to show you around a museum that they are very proud of, and they just might help you with a few memories of Christmas past.

Admission is free, but donations are accepted including military uniforms, photos or equipment. For more information, call Mault at 704-857-7474.

The Price of Freedom Museum is at 2420 Weaver Road.