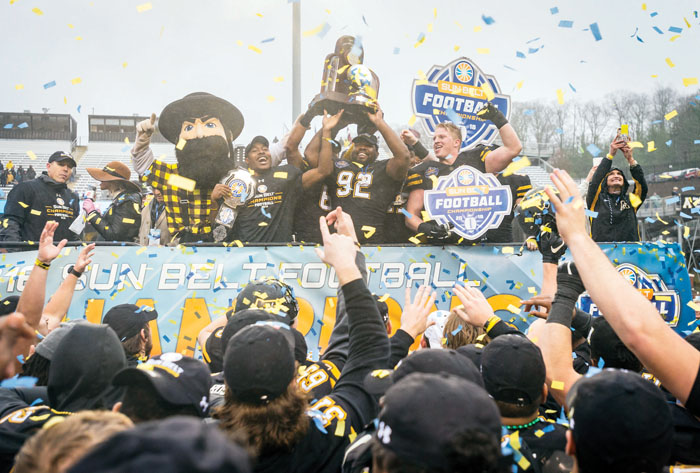 Andrew Dye/The Winston-Salem Journal via AP ... Appalachian State defensive lineman MyQuon Stout (92) celebrates with his teammates after the Mountaineers defeated Louisiana, 30-19, in the Sunbelt Championship on Saturday, in Boone. Stout is a former star at Carson High School and was Rowan County’s Athlete of the Year in 2012.

The victory earns the Mountaineers (10-2) the conference’s automatic berth in the New Orleans bowl on Dec. 15 against a team from Conference USA.

ULL took a 3-0 lead when Kyle Pfau’s 37-yard field capped a nine-play, 55-yard game-opening drive. The lead lasted 17 seconds. Evans took the ensuing kickoff 97 yards before being tackled at the 1-yard line and Marcus Williams Jr. ran it in one play later for a 7-3 lead. Pfau’s second field goal — from 45 yards out — pulled the Ragin’ Cajuns within 7-6, but Thomas ripped off a 25-yard TD run to end a nine-play, 75-yard drive and the Mountaineers (10-2) took a 14-6 lead into halftime.

Chandler Staton kicked a 42-yard field goal on the Appalachian State’s first possession of the second half for a 17-6 lead, but the Ragin’ Cajuns (7-6) answered with 10 straight points — Andre Nunez’s 8-yard TD run and Pfau’s 23-yard field goal — to pull within 17-16. Staton’s second field goal — a 42-yarder — on the last play of the third quarter pushed the Mountaineers lead to 20-16. Appalachian State made it a two-score game on Thomas’ 35-yard TD run after a Tae Hayes interception and 32-yard return gave the Mountaineers the ball at the ULL 44-yard line. Pfau added his fourth field goal of the game and Staton booted his third of the second half to cap the scoring.

Trey Ragas ran for 101 yards on 16 carries for ULL, which finished with 216 yards rushing.

KENNESAW, Ga. (AP) — Kennesaw State turned a late turnover into a Justin Thompson field goal with less than two minutes to play for a 13-10 victory over Wofford in the second round of the FCS playoffs on Saturday.

With the Terriers facing third-and-long near midfield, Anthony Gore sacked Joe Newman and forced a fumble that was recovered by Andrew Butcher for a loss of 20 yards.

As befitting the defensive struggle in the rain, the Owls went nowhere but Thompson kicked a 30-yard field goal with 1:52 to play.

The fourth-seeded Owls (11-1) are home against fifth-seeded South Dakota State in the quarterfinals next weekend.

LYNCHBURG, Va. (AP) — Kentory Matthews rushed for 151 yards and four touchdowns and Frankie Hickson ran for 100 yards and a score to power Liberty to a 52-17 romp over FCS-member Norfolk State on Saturday.

Liberty (6-6), an FBS independent, pulled away from a 3-3 first-quarter tie with 35 unanswered points before halftime.

The Flames took the lead for good on Stephen Calvert’s 18-yard TD toss to Michael Bollinger with 52 seconds left in the first quarter. Liberty tacked on four touchdowns in the first 12 minutes of the second quarter.

The Bison (13-0), six-time FCS champions, will play No. 8 seed Colgate next week in the quarterfinals after rushing for 407 of their 493 total yards. Two other Bison backs went over 100 yards: Bruce Anderson with 118 and a touchdown and Ty Brooks with 103 and a score. Adam Cofield added the Bison’s seventh TD on the ground, a school playoff record, for the game’s final points.

The Bobcats scored first on a Tristan Bailey field goal, but Dunn ran for two scores and Anderson went 32 yards for another and a 21-3 first-quarter lead. Dunn added two more TDs in the second quarter, the second on a 46-yard run and Cam Pedersen added a field goal for a 38-3 halftime lead.

PUZZI KICKS WINNING FG FOR COLGATE AS TIME RUNS OUT

HAMILTON, N.Y. (AP) — Chris Puzzi kicked a 38-yard field goal as time ran out to give Colgate a 23-20 win over James Madison on Saturday and send the No. 8-seeded Raiders to the FCS playoff quarterfinals.

Puzzi’s winning kick, his third field goal of the game, went inside the right upright and came after James Madison came up short on a fake punt on fourth-and 5, giving the Raiders the ball at their 39-yard line with 2:46 left.

The Dukes (9-4), who have won two national championships and were making their 15th playoff appearance and fifth straight, tied the game at 20-all on Ben DiNucci’s 7-yard run with 8:22 left in the fourth quarter.

Trailing 13-6 at halftime, Colgate (10-1), hosting its first FCS playoff game in 15 years, got touchdowns on Grant Breneman’s 32-yard run and his 14-yard pass to Owen Rockett in the third quarter to lead 20-13. Rockett finished with 104 yards receiving on five catches.

Colgate, the No. 8 seed, will take on top-seeded North Dakota State (12-0) in the quarterfinals.

Montana State scored its lone touchdown on Troy Anderson’s 51-yard run in the third quarter before Brooks went 30 yards for NDSU, which has won 18 straight games, the longest active streak in the FCS.