After a lag, Hotwire continues transition from Fibrant 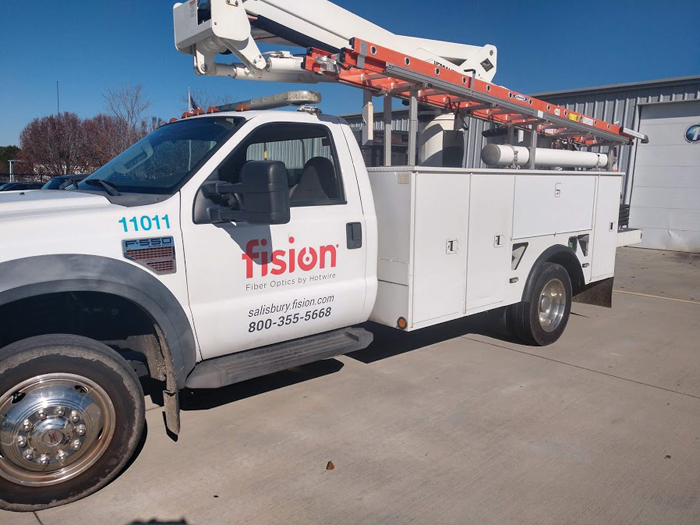 A truck is parked displayed with "fision, Fiber Optics by Hotwire."

SALISBURY — After months of talks with the city and a referendum choice for voters, Hotwire transitioned to become the municipal internet source in October.

According to Jonathan Bullock, vice president of corporate development and government for Hotwire Communications, about 10 percent of video customers in the city are now on Hotwire’s system. He said the process is taking longer because Hotwire has to replace the hardware at customers’ homes.

The change has brought out some frustrations in the community.

“It was supposed to be a ‘seamless transition,’” said Susan Davis, who has TV, phone and internet with Hotwire.

Davis said she has had problems with Hotwire’s customer service. She called one time because she wasn’t able to access Netflix on her TV and another time with a question about a charge on her bill.

Her partner managed to reboot the system to make Netflix work, but her query about her bill has gone unanswered. She said there was no option to speak to an operator in the menu, and when she got through to a person, she said she was given service call ticket and a promise to call her later. She never got a call.

“That just seems strange to me,” Davis said. “Part of my bill goes to customer service.”

Davis emphasized she is satisfied with the quality of the services and is willing to remain a Hotwire customer.

“I’d like to see what will happen,” she said. “It would be nice to have a little customer service.”

Chris Agner voiced his concerns about Hotwire through a letter to the editor in the Salisbury Post in October. He said after it was published, other residents approached him with similar situations.

He said when he initially called Hotwire, a representative didn’t know Hotwire had customers in Salisbury. Eventually, Agner was able to get a Hotwire representative to fix the problem.

“It’s getting closer to what was advertised,” Agner said.

He currently has a problem with the sound on his TV cutting off, but he has had a positive experience speaking to customer service to solve it.

Agner said the 10-gigabit internet service is seamless. His children have raved about the internet, including his son, who works in information technology in Charlotte. He has the same-price package but with more channels, including Bloomberg, which wasn’t offered by Fibrant.

Thirteen of the 16 Fibrant employees have stayed on with Hotwire.

General manager Michael Grandizio comes from Philadelphia and has begun working on network enhancements in Salisbury.

“Hotwire is always here to talk to you,” Bullock said. “I’m an open door, and Hotwire has an open door.”

He said once the company completes the transfer of video customers, it will begin adding customers and businesses

“We want every customer to be happy with the product that we are putting out there,” Bullock said.

Bullock said he is not happy with how long the transition with networking and testing has taken. He said Hotwire deployed a 10-gigabit service to the home network, which took additional time but will be a long-term gain for the city.

“You can’t always be perfect, but you can make things better and fix it,” he said.

One of Hotwire’s goals was to cut down the time to install internet. With Fibrant, that could take a couple of weeks. Hotwire also will add a pay-per-view option, which the old system didn’t offer.

Bullock said Hotwire also will be more involved in community activities and showing it is active.

“We’re an open door if anyone has comments or concerns,” Bullock said. “We take those things seriously.”

“I want them to be successful,” Agner said. “I am cautiously optimistic things will be better.”