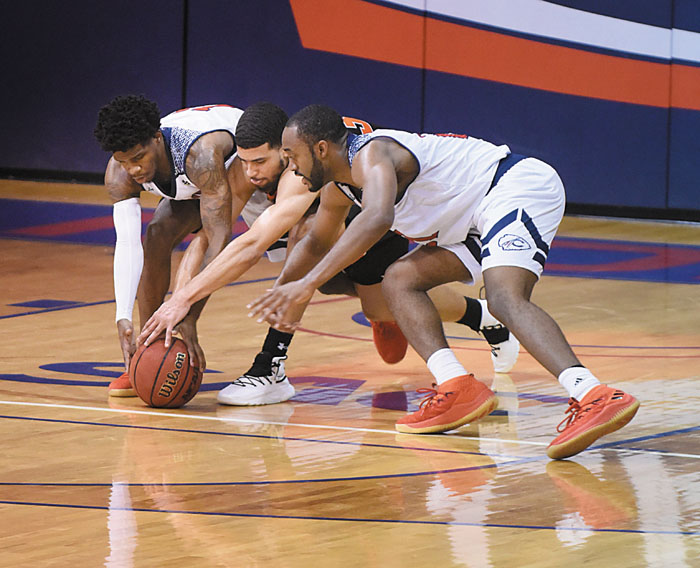 It happened Saturday at Goodman Gym, where the short-handed Indians were far-from-perfect in an 83-79 South Atlantic Conference win over Tusculum.

“I think maybe it says something important about us,” Perron offered, moments after Catawba prevailed in a breathless race to the finish line. “We’re a team that can be good even when we don’t play our best. This was probably our worst game overall and yet, we still came out on top.”

Catawba (6-1, 2-0) won its fifth straight by refusing to come unglued when it mattered most. It converted only five of 12 free throws in the last four minutes and saw its nine-point lead dwindle to 81-79 in the waning seconds.

“But we held on,” senior guard Jameel Taylor said. “We just had to stay poised and stay with what was working. It seemed like every possession counted.”

The outcome wasn’t cemented until Catawba’s Devin Cooper and Malik Constantine each made one of two free throws in the final 20 seconds to close the scoring. Burly teammate Daquan Lilly corralled a wide-of-the-mark, 3-point attempt as time expired.

“They were taking punches and punching back,” said Lilly, a 6-foot-6 junior who shot 9-for-13 from the field, paced all scorers with 22 points and yanked down 11 rebounds. “But through it all, we stayed with it and found a way to win.”

“He’s a good rebounder but they’ve got several guys who can crash the boards,” said losing coach J.T. Burton. “They’re a good team because of their size.”

Tusculum (3-5, 0-2), which boasts the league’s stingiest defense, used an assortment of zones to stay in the game. The Pioneers scored the game’s first five points and later forged a 36-36 tie when Dillon Smith buried a 3-ball from the left corner late in the first half. Catawba took a three-point halftime lead, thanks largely to reserve guard Marcell Haskett’s marksmanship from beyond the 3-point line. The junior went 5-for-5 from downtown in the opening period and finished the game with 18 points.

“I’m a defensive player, but whatever the team needs me do, I will,” Haskett said. “In the first half, that was just my teammates finding me and me knocking them down. Me and Jameel, we run those plays every day in practice. We’re getting pretty good at it.”

Haskett, a six-footer from Newport News, Va., has gotten so good at it he’s leading the team with a 15.0 points-per-game average and draining 58 percent of his three-point shots. Yesterday he forced  Tusculum to play a box-and-one against him.

“We knew he could shoot the ball, knew he could light it up,” said Burton. “But they did a really good job finding him when he was open. He’d hit these contested, 25-foot shots — but it’s almost like they weren’t contested because he took these little fadeaways.”

Perron knows where that comes from. “As a little guy growing up, he learned to shoot that way,” the coach said. “Gives him a little more space to operate.”

The second half was ruled by Catawba’s bigs. Taylor’s three-point play with 8:37 remaining gave the Indians a 61-58 lead they never surrendered. And Lilly scored 10 points in a seven-minute stretch, capped when he seized an offensive rebound and hit a put-back that provided a 77-68 edge with 3:16 to go.

When it ended, Perron — in his anecdotal way — compared the game to a dental appointment. “That’s what it felt like,” he said. “There was a lot of resistance. We had chances to create separation and didn’t. We had ill-timed turnovers. And we missed free throws with some reliable guys on the line.”

Despite all that, Catawba is 2-0 in your Sunday morning paper and sits among the elite in the conference standings.

“Oh, this conference is going to be crazy,” Taylor concluded. “Any team can get it going at any time. You just have to stay on your horse.”

NOTES: Catawba shot 48.3 percent from the floor but converted only 20 of 34 free throws. … Taylor finished with 19 points and eight rebounds. Constantine (10 and 10) had a double-double and Ben Zemonek (5-for-8 FGA, 13 points) gave the hosts five scorers in double figures. … Trenton Gibson led Tusculum with 21 points and teammate Tariq Jenkins added 18 off the bench. … The Indians visit Elizabeth City State on Tuesday, then break for finals week.