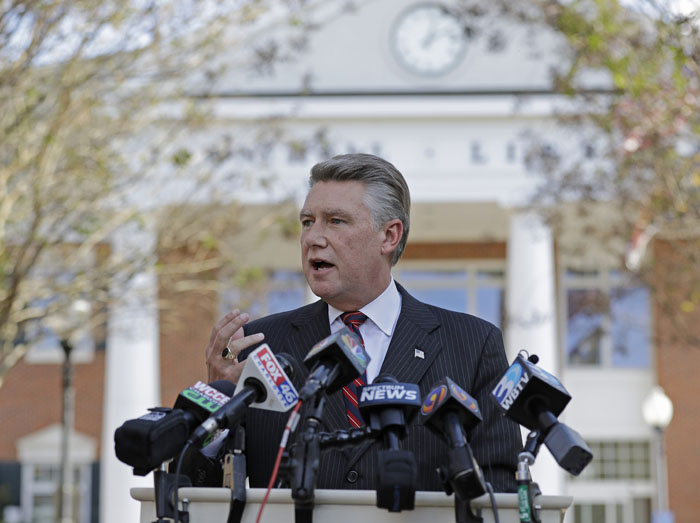 RALEIGH — Although a mere 900 votes separated two North Carolina congressional candidates, the trailing Democrat conceded the race weeks ago. But as the Republican prepared to go to Capitol Hill, election investigators are worried something fishy went on with absentee ballots.

The state elections board voted 7-2 Friday to hear evidence by Dec. 21 before deciding whether to certify the result. Republican Mark Harris leads Democrat Dan McCready by 905 votes from nearly 283,000 cast in eight south-central counties reaching from Charlotte to near Fayetteville.

The hearing will ensure “the election is determined without taint of fraud or corruption and without irregularities that may have changed the result of an election,” board member Joshua Malcolm, a Democratic member, said in his motion.

If board members find enough problems that could have altered the outcome or cast doubts on the election’s fairness, they could order a new election, which could not take place until after the new session of Congress convenes Jan. 3, creating a temporary vacancy.

Also Friday, The Associated Press retracted its call of a winner in the 9th District. The AP, which had called the race for Harris on Nov. 9, said it is treating the board’s action as if the race has proceeded to a recount. AP does not call winners in any election that is subject to a recount.

Democrats already won enough House seats nationwide in November to take back control of the chamber. But a Democratic victory in the 9th District would flip a seat that has been held continuously by Republicans since 1963.

The board’s public vote came after a three-hour closed door meeting, with two Republican members joining all Democrats and the lone unaffiliated member in voting to hold the hearing. The state Republican Party had vowed to go to court if the board didn’t certify Harris’ victory Friday. The board signed off on nearly all other Nov. 6 election results earlier this week.

McCready conceded the race the day after Election Day, when Harris led by less than 1,900 votes.

McCready reaffirmed his decision a week later when more counted ballots cut the margin by half. But just ahead of Friday’s hearing, McCready said it’s critical to determine now whether wrongdoing occurred.

“We must do everything we can to protect the integrity of our ballots and the sanctity of our elections because our democracy depends on it,” McCready said in a statement.

Board members have said little publicly about what they’re examining. But the focus appears to be on Bladen County, located partially in the district, and adjoining Robeson County, which is entirely in the district. The board confirmed it seized some Bladen absentee ballot applications and ballot envelopes the day after the election.

In separate sworn affidavits released Thursday by the state Democratic Party, two county residents said an unidentified woman came to their homes, telling each of them she was supposed to collect absentee ballots in the area. The residents said the woman took their ballots, which weren’t sealed in envelopes as required by law.

“Because of the way she presented herself, I thought she was legitimate,” Emma Shipman, one of the residents, wrote in an affidavit.

Harris said late Friday that the board should certify the race results now while continuing the investigation.

“I support any efforts to investigate allegations of irregularities and/or voter fraud, as long as it is fair and focuses on all political parties,” Harris said. “But to date, there is absolutely no public evidence that there are enough ballots in question to affect the outcome of this race.”

Bladen and Robeson counties had the highest percentages among 9th District counties of requested mail-in absentee ballots that weren’t returned, according to Michael Bitzer, a Catawba College political science professor analyzing race data. The total of nearly 1,700 unreturned ballots in the two counties is greater than Harris’ lead.

Robeson and Bladen counties were among the hardest hit by Hurricane Florence in mid-September.