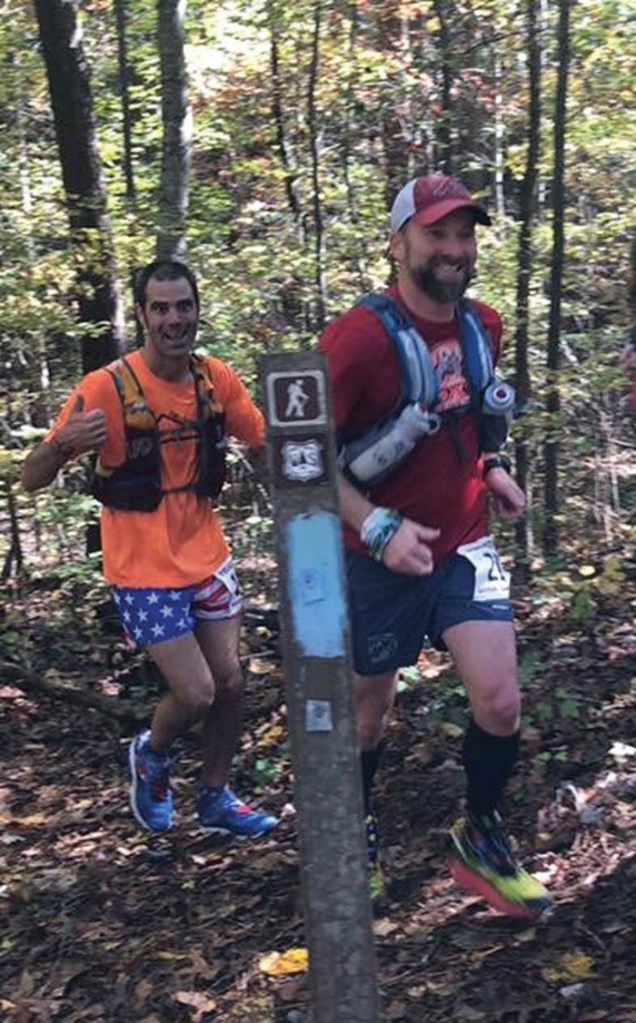 Kenneth Todd (L) and Stu Stepp of Salisbury run near mile 18 of the Pinhoti 100 Mile race in Alabama.

I’m big on challenges. But two good friends, Stu Stepp and Kenneth Todd, are focused on huge challenges too. Both are ultra (longer than a marathon distance) runners and decided to compete together at the Pinhoti 100 mile race, point to point, north to south, from Heflin, Ala. to Sylacauga, Ala. Most of the race was on single track trail along the Pinhoti Trail. They climbed Mt. Cheaha, the highest mountain in Alabama, as well as Horne Mountain and Talladega Mountain.
Stepp said, “If we weren’t on single track, it was jeep forest roads. Later in the race we would go back and forth between the two. The last three miles were on a paved road heading to the finish line at Sylacauga High School. There was about 17,000 feet of elevation gain and everyone had to finish within 30 hours. We started at 7 a.m. Saturday morning and had to be finished by 1 p.m. Sunday.”
Todd said, “Imagine running from Salisbury to Chapel Hill and up and over Mt. Mitchell twice along the way. I prefer multiple loop courses where I can set up camp along the way but I couldn’t do it here. This was point to point and I could only carry so much. But the race was close to home and we didn’t have to fly, so it was a good choice.”
Stepp has done 15 ultras and this was his fifth attempt to run 100 miles. He said, “It was very hard though. There was plenty of climbing and some sections were slow at night. The Pinhoti was not as tough as some of the other races but I think it would be a good first 100 miler for first timers only if they can do the climbing.”
To get ready, Stepp said, “I usually run 50 miles a week, about 20 on trails. KT and I went to Uwharrie several times, usually right after work and would run there for 5 or 6 hours, in the dark, to get our training in. It’s better to have 60 or 70 miles a week and as much of that on trails as possible. I also want a nice balance of 4-5 ultras a year to stay ready.”
Todd added, “Those loops at Uwharrie included 3,500 feet of climbing. And the descent can be just as hard. Plus going in the dark, rain or cold was a confidence builder for mentally tough times in the race. I also ran a flight of stairs in my house 10 times after a run, just to get that motion in my legs. Typically, I am always in marathon mode after running so much during the week and on weekends. Also, I was blessed to be able to run Rim to Rim to Rim, a 49 miler with 15,000 feet of climbing, at the Grand Canyon in September. It was a great training run for Pinhoti.”
Todd finished in 26 hours, 33 minutes and 53 seconds. Stepp crossed the line in 28:23:46.
Of course, they have upcoming plans. “Pinhoti is a Western States 100 qualifying race. Western States is one of the most difficult 100 mile races in the world. Last year, I qualified at the Umstead 100 in Raleigh and aim for the same this year. I plan to continue to attempt to qualify for Western States each year. This was my fifth Ultra Race with three of them being 100 mile races and one 50K and one 50 miler. All have their own unique characteristics. I really enjoyed this race, because it was well organized, a great trail to run on and an awesome challenge with the amount of climbing within the 100 miles,” said Todd.
He continued, “Eat and recovery! I was hungry and pretty sore, which was to be expected. 100 mile races need to be celebrated. I will do a 5K in the Tennessee mountains for Thanksgiving with my wife and oldest daughter, Mackenzie. And the Dopey Challenge in Disney World this January, running a 5K on Thursday, 10K on Friday, half marathon on Saturday and marathon on Sunday, marking my 39th state with a completed marathon. That’s it for the moment.”
Stepp said, “I hope to be ready to run a sub 3:10 marathon at Myrtle Beach in March. I will run at least one ultra after that and plan on the Yeti 100 next September in Virginia. If I don’t get in, I will find another one. I would like to have a nice collection of buckles.” Belt buckles are given to all finishers.
Look for information on next Saturday’s Santa’s 5K Run for Hunger and other events at www.salisburyrowanrunners.org