Synergy, local runners achieve their goal as a group bonds 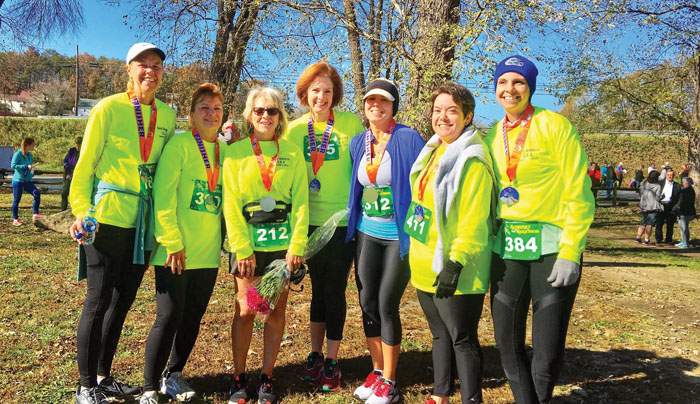 Brooke Taylor likes this fitness thing. She had already completed several 5Ks and a 10K, then was ready to move up in distance.

“I thought that if I could talk some other runners into doing the half marathon (13.1 miles), it would add fun and accountability to the training days,” Taylor said.

Taylor lost more than 50 pounds during her year with the Salisbury Post Wellness Program. She liked the feeling and how her body changed. Making running and exercise a daily part of life and changing eating habits made all the difference.

“Participating in the Post’s fitness/wellness program literally changed my life,” she said.

A group of women were invited to join in, three having previously run a half marathon. Others didn’t believe they could do it but signed on for what they hoped would provide some fun early-morning runs.

“As the mileage increased, so did our friendships,” Taylor said. “We printed ‘6 a.m. Sisters’ on our shirts, which became more true as the months passed.”

Luann Fesperman, Tisha Goodwin, Donnie Smith and Wanda Parks had already spent some time running with Taylor, so they formed the nucleus of the group.

“We had so much fun,” Taylor said. “Some mornings it was hard to tell if we were gasping from running or laughing at each other. We had multiple falls, lost car keys and backtracks, unscheduled bathrooms stops and water breaks, six-mile runs that turned into seven, wrong turns, too many hills that made our ‘behinds talk to us,’ acorns that sent us flying, roadkill that grossed us out, wild animal sightings, and sometimes wild people sightings.

“We said good morning to kids waiting at bus stops, got cheered up and cheered on by total strangers, inspired by sunrises, changing leaves, and other runners out doing their thing.”

The group decided to run the Mayberry Half Marathon in Mount Airy.

“I had decided if I ever did another half marathon, it would be Mayberry,” said Parks, an accountant. “This really piqued my interest. The course is flat and runs along the river.”

Fesperman, owner of the Trophy House, said she wanted to continue running with her friends.

“One thing led to another and everyone decided to go for it,” Goodwin added. “Knowing there were people counting on me to run at 6 a.m. helped me get out of bed at 5 a.m.”

Beautician Smith was not confident early on.

“I never thought I would be able to do a half, so I said I would train with the group just to do the 10K,” Smith said. “The next thing, I was signing up for the half.”

Carolyn Sithong, an occupational therapist, inquired about a running group and latched on about midway through training.

Lorie Miller, senior teller at F&M, was the last to join the group while training for her first marathon to honor her mother’s memory.

Goodwin, Parks and Sithong had finished a half marathon.

When all had crossed the finish line, the women hugged, laughed, cried, groaned and made pictures. They answered another group text, “On a scale of 1-1,000, how sore are you?”

“I physically went through a rough time of training and they would always stay with me and encourage me,” Parks said. “I loved getting to know friends even better and making new friends. I am still amazed what you can train your body to accomplish.”

“I don’t think I would have done it without them, Fesperman said. “A lot of mornings, I didn’t want to get out of bed but I knew they would be there ready to go.”

Smith added, “It was a wonderful and emotional experience, especially how we all worked together and bonded to support each other.”

“I didn’t know any of them when I started. I’d run alongside one lady and talk (while trying to breathe) and slowly got to know them all,” said Goodwin.

“It’s amazing what a regular person can do when you set a goal, make up your mind and don’t stop until you get there,” Taylor said. “As we were walking away from race day and saying our goodbyes, I joked that full marathon training begins Monday morning and got a few laughs and dirty looks. With any goal, once you complete it, you’ve got to set a bigger one. Maybe the 6 a.m. Sisters will become the 30K Sisters. Care, encouragement and commitment. I can’t think of a better group of ladies to run with.”