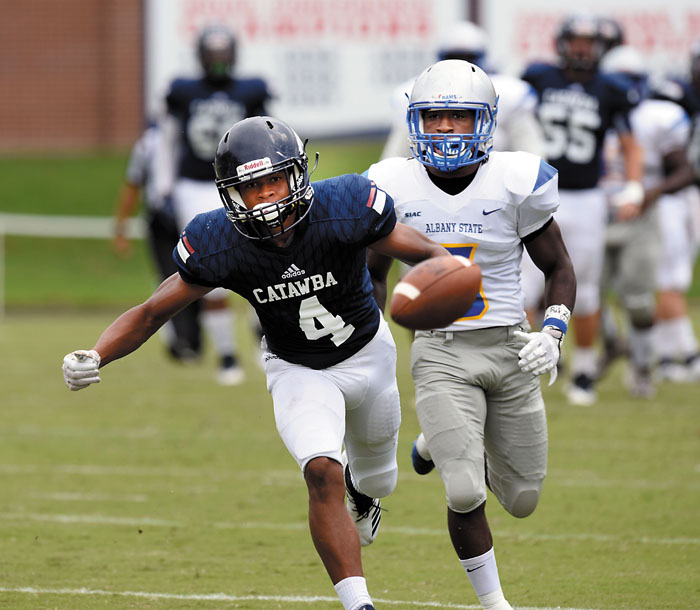 Wayne Hinshaw file photo/for the Salisbury Post ... Catawba receiver Devonte Tanksley (4) looks at an over-thrown pass during a game against Albany State on Oct. 6. The Indians close out their season on Saturday at home against UNC Pembroke. Game time is 1:05 p.m.

That’s how dire the injury situation has gotten for Catawba, which had three starting offensive linemen out last week when it was battered by the Bears, 63-21.

Both starting cornerbacks are banged up. So are both regular defensive tackles. So is just about everybody. The training room is overflowing.

“Football is a physical game, so I’ve never used injuries as an excuse,” Catawba head coach Curtis Walker said. “But we’ve got as tough of an injury situation right now as any I’ve ever experienced. That changes a lot of things. It changes how you practice. It changes how you can operate a game. You just don’t have enough bodies, don’t have enough strength to do things you want to do.”

The injuries are showing up in places where guys normally go unnoticed.

“Zach Lecius and Joseph Dress are very good special teams players, and they’re out,” Walker said. “Long snapper Nick Chandler was out last week. Everyone notices when the starting quarterback goes down, but when you lose those key special teams guys, no one realizes it. But it makes a difference. It hurts. You’re not the same team.”

Catawba’s rivals Lenoir-Rhyne and Wingate will be involved in high-profile playoff games on Saturday, a reward for special seasons. The Bears have won 10 in a row, while the Bulldogs have won eight straight.

Catawba (3-7) will play without hype and with only a modest goal. It just wants to end this brutal season with a one-game winning streak.

The Indians are home on Saturday at 1:05 p.m. against a UNC Pembroke squad that has endured a similar lost season, a season disrupted and knocked off track by Hurricane Florence. This game was supposed to be played by the Indians and Braves on that mid-September weekend when Florence hit. It was originally listed as a cancellation, but  it was reinstated to the schedule a few weeks ago.

Like Catawba, UNCP (2-7) just wants to find a way to finish positively. The Braves haven’t won since Oct. 20. They aren’t in the South Atlantic Conference, but they basically play a SAC schedule. They are 0-5 against SAC teams this year.

Catawba’s last two games have been total disasters. Newberry scored 33 unanswered points in one stretch and beat Catawba, 40-10. Catawba was down 42-0 at Lenoir-Rhyne, before losing 63-21. For the first time during Walker’s tenure, the Indians have been less than competitive.

“In the hard times, you find out who your friends are, and I have to say a lot of people have reached out to me, telling me to hang in there,” Walker said. “Yes, this has been tough to deal with. This has been different.  In 34 years of football, this is only the fourth time I’ve experienced a losing season. But I can’t show my disappointment. I stay positive. I encourage all our guys to find the bright side.”

Catawba’s staff continues to work, harder than ever. The holes in the lineup will be patched as well as possible, and the Indians will try to send the senior class out with a victory.

Jordan Hemingway said it feels like he arrived as a freshman, took a nap, woke up, and suddenly was a senior. It all goes by in a hurry. Saturday will be the bull-doggish defensive lineman’s final game.

“A few of our seniors have aspirations of continuing to play on, but for most of them Saturday will be the last football game they’ll ever play,” Walker said. “That’s why this is such a highly important game. They’ll remember this game the rest of the lives. I still remember my last game as a player.”

Catawba leads the all-time series, 4-3. Another Catawba victory would provide a boost in a lot of ways.

It would help recruiting, for one thing. Walker said the Indians are recruiting diligently every day, that they’re recruiting like they’re undefeated.

A win also would provide a slice of positive momentum moving forward into spring camp and those tedious summer workouts.

Saturday is supposed to be cool and clear, perfect football weather. Walker hopes to see a large crowd as the Indians say farewell to players who have meant so much to the program — Jourdan Osinskie, Kenyatta Greene, Quinzavious Sands, Chris Thompson, and on and on.

“Hopefully, the atmosphere will be such that it will help us be successful,” Walker said. “The mindset of our seniors is to make this game an example for our young guys to follow. We want to lay a solid foundation for next season.”