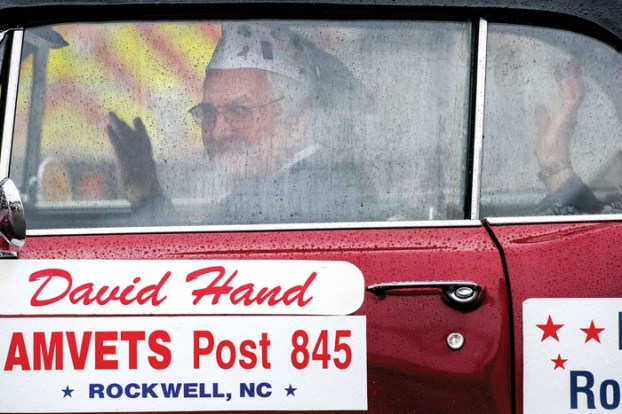 Mike Rozmaryn peers out the window of the 1964 GTO he was driving during the Veterans Day parade on Monday in downtown Salisbury. Jon C. Lakey/Salisbury Post

SALISBURY — Main Street was empty except for small gatherings of people to watch the Veterans Day parade on a cold, wet Monday afternoon.

A line of cars drove down Main Street with drivers and passengers waving and honking.

Carie Fugle sought shelter at Meroney Theater while watching the parade with her kids. She said she and her family have made attending the parade a tradition.

“We do try to come every year, and I think it’s just important,” Fugle said. “We have a lot of family members who also served, so we can’t be near them to recognize and honor them. We can support our locals instead.”

During the parade, she explained to her children that although they were cold, many veterans also served in the cold or in other bad weather.

“It’s important to show my kids that we have to give back and to show support, so this is one simple way we can be present,” she said. (My son) loves soldiers and all that, so it’s special, I think, when he’s at an impressionable age to be able to see that our veterans provided so much for us. It’s something simple we can do.”

SALISBURY — Veterans and their families gathered Monday morning at the Hefner VA Medical Center to honor those who made... read more