Kyle Busch sets up showdown with Kevin Harvick for the title 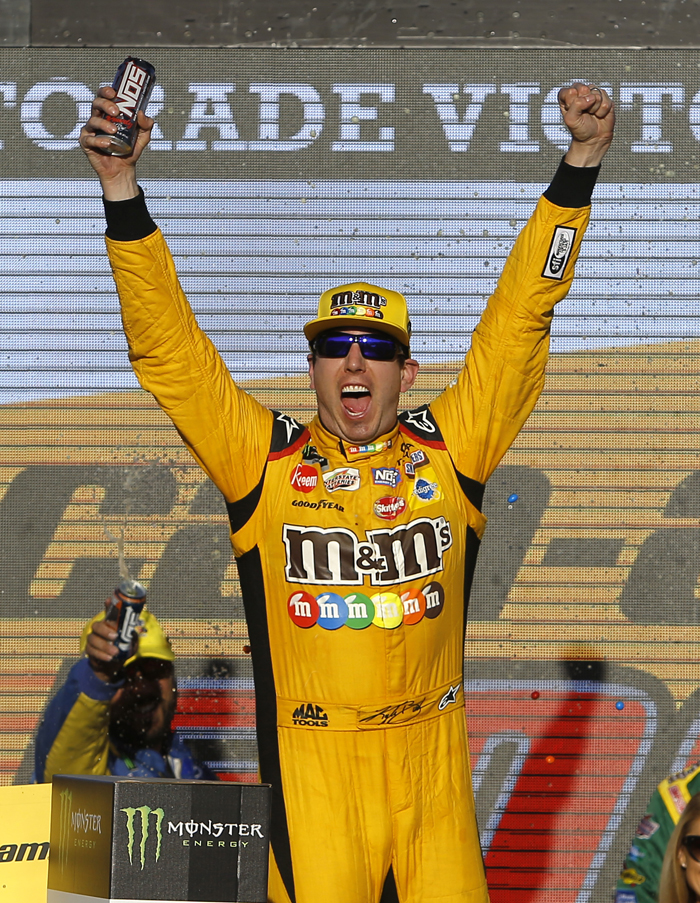 AVONDALE, Ariz. (AP) — The three most dominant drivers of this NASCAR season will fittingly race each other for the championship, a chance for Kyle Busch, Kevin Harvick and Martin Truex Jr. to settle which team is truly the best.

It was Busch who claimed the latest round, winning for the eighth time this year Sunday to tie Harvick for the most Cup victories. His win at ISM Raceway outside of Phoenix was the final qualifying event for next week’s finale at Homestead-Miami Speedway, where it will be winner-take-all between NASCAR’s so-called Big Three and the driver once called “Sliced Bread.”

Busch, Harvick and reigning series champion Martin Truex Jr., coined The Big Three because of how they dominated the regular season, advanced into the championship round as expected. Joey Logano, nicknamed “Sliced Bread” before his NASCAR debut at age 18 because he was predicted to be “the best thing since …,” has the fourth spot.

The field is two Ford drivers, two Toyota drivers and represents four organizations. Chevrolet was shut out of the finale.

“I don’t know how you could pick a favorite necessarily,” Busch said. “I would predict this is the best four, the closest four that have been in our sport in a long time.

Busch and Harvick have gone win-for-win all year, and Busch could have controlled Harvick’s fate late in the race when he was lined up against Harvick teammate Aric Almirola on a restart. An Almirola victory would have eliminated Harvick from the playoffs, which Busch acknowledged considering.
“I did think about it,” Busch said. “But I’m here to win the race. They always want it to play out naturally.”

Now Busch might just have the momentum to take the title.

“I’d like to think it gives us a lot (of momentum) but I don’t know, talk is cheap,” Busch said. “We’ve got to be able to go out there and perform and just do what we need to do. Being able to do what we did here today was certainly beneficial. I didn’t think we were the best car, but we survived and we did what we needed to do. It’s just about getting to next week and once we were locked in, it was ‘All bets are off and it’s time to go.'”
Harvick was the favorite to win Sunday and started from the pole but an early flat tire made Sunday’s race more eventful than Harvick expected.
He found himself racing late against Stewart-Haas Racing teammates Kurt Busch and Aric Almirola for the fourth transfer spot to Homestead, but Busch was wrecked late and Almirola had to win the race to snatch the berth away from Harvick.
“We kept ourselves in position all day and there at the end, it was just like everybody wrecking and all over the place,” Harvick said. “We just needed to stay out of trouble and try to find a safe spot there.”
Brad Keselowski and Kyle Larson, both already eliminated from the playoffs, finished second and third. Almirola was fourth and Harvick fifth.
Harvick was stripped of his berth to Homestead that he’d earned by winning a week ago at Texas when NASCAR ruled his car was illegal. The penalty forced him to requalify and he had to do it without his crew chief or car chief. But he’s a nine-time winner at this track, was fastest in practice, started on the pole and led the first 72 laps before his tire went flat.
That put Harvick back in 30th and one lap down, and he had to work his way back to the front the rest of the race. He was aided by a flurry of mistakes by the other championship contenders. Clint Bowyer had a flat tire that caused him to wreck, Kurt Busch was wrecked and that accident collected Chase Elliott, who earlier had been penalized for speeding on pit road. Kurt Busch also had been penalized early in the race for passing the pace car.
The intensity of the race picked up with a flurry of late cautions that began when Ricky Stenhouse Jr. wrecked with 48 laps remaining. Stewart-Haas Racing used split strategy on the ensuing pit stop as Kurt Busch stayed on the track to move into second and Harvick pitted for new tires to restart sixth. NASCAR then stopped the race for the extensive cleanup needed for Stenhouse’s crash and the cars parked on the track for close 11 minutes.
But Kurt Busch never got to find out if his strategy was the right one as he was promptly wrecked on the restart. Denny Hamlin, trying to keep his streak of winning at least once in every season, aggressively tried to dart to the front and while doing so shoved Busch’s car into the wall. As Busch’s car ricocheted back into traffic he tagged Chase Elliott to end Elliott’s bid to race his way into the finale.
“Denny came out of nowhere and cleaned us out,” said Kurt Busch.
Alex Bowman then spun, NASCAR again stopped the race for a cleanup, and Aric Almirola used the sequence to make his play for the victory. He restarted third, behind teammate Harvick, on the restart.
Almirola dove to the bottom of the track to slip past Harvick and move into second. Another caution with 17 laps remaining put Almirola on the front row alongside Kyle Busch for the restart with 12 to go. But Almirola didn’t have much for Kyle Busch, who pulled away. With Almirola out of contention for the victory, Harvick was finally in the clear.
More from ISM Raceway:

Logano had a short day at Phoenix because his left rear tire went flat and caused him to spin. He wound up 37th with an early exit, but didn’t think it would hurt his momentum for the championship.
“These things are out of your control, so it doesn’t really knock your confidence down,” Logano said. “There’s nothing my team could do different, so there’s really nothing to get depressed about.”
Logano believes he’s the favorite to win the title because by winning the opening race of this round to qualify for Homestead gave Team Penske two additional weeks to focus on the main event.