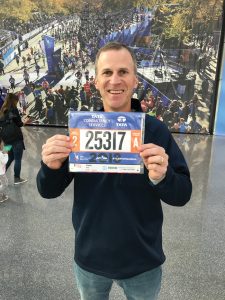 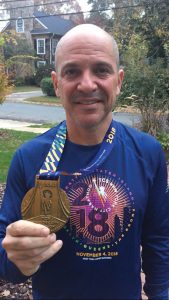 Andy said, “To sum it up in one word…OVERWHELMING.  From the initial climb to the top of the Verrazano Bridge with the amazing view of Manhattan to your left, to the legions of spectators throughout Brooklyn, Queens, the Bronx and Manhattan all loudly cheering you on, this was just an overwhelming experience. Over 52,000 runners made it from Staten Island for the start all the way to the finish in Central Park without any issues.”

Steve agreed, “I cannot begin to describe how great this experience was.  I couldn’t believe how many people were out lining the streets cheering on the runners.  For folks in Salisbury, imagine 26 miles of the holiday caravan with spectators shouting the entire time.  Between the cheering, whistles, cow bells, horns, and music, I can’t tell you how loud it was and how that energized the runners.  It far exceeded my expectations.  Another great part of it was how well the city gets over 52,000 runners safely through to the finish.  I guess having 12,000 volunteers helps!  The weather was perfect with cool temperatures, sun, and a light breeze.”

Both were excited to do NYC after other marathon attempts. Andy said, “I remember watching the NYC marathon on TV as a child and I knew it was some sort of big deal.  I also remember thinking, those people are crazy, why would anyone want to run 26.2 miles?!” As I got older, I started paying attention to the stories, commitment and perseverance of the runners.  I was inspired by the effort to train and complete a marathon. My only prior marathon experience was in Myrtle Beach in 2014, which didn’t go as well as planned. I swore off other marathons unless I got into NYC. I felt like I had a cinder block tied to each foot in Myrtle Beach for those last 6 miles – it was rough but I was still proud of a 4:13 finish.”

Steve had also completed the 2014 MB Marathon and the 2015 Kiawah, battling both heat and winds.

Andy said, “I was in NYC Friday to Monday.  My brother and nieces live there so I spent time with them.  My wife, Meredith, a veteran of seven marathons including the 2017 NYC, and my daughters, Macy and Miles, couldn’t go because of a wedding. My pre-race time focused on details and logistics, like the race expo and scoping out places to see my family on the course and find them after the race.”

Steve took his wife, Andrea, for the weekend but said, “My daughters, Katie and Laura, didn’t get to go. We had no real plans, but made it work.”

Training for Andy had some bumps, “I unofficially started training in April by ramping up the distance of my weekly long runs, a 16 week plan.  Special thanks to my marathoner wife, Sonny Ali and Ken Davis who accompanied me on those training runs. The only snag was a severely twisted ankle resulting in a sprained foot and bone bruise but no fracture.  Delaine Fowler and her crew at Accelerate Therapy and Performance did great work.”

Andy was rolling, “I was feeling really good through mile 22, high-fiving spectators as I ran and soaking in the amazing energy of the shouting crowds which was almost deafening in some places.  With the tip from Meredith, I my name taped to my shirt and at least 1000 people shouted my name and encourage me on with, ‘Go Andy, you got this Andy, you’re doing great Andy!!’ They estimated 2 million spectators lined the race course and cheered us on. Rock bands, marching bands, gospel choirs, and DJs all lined the course.  I had friends in Brooklyn who I saw at mile 12 and then I saw my brother and nieces at mile 18 (and 23) in Manhattan providing a huge boost of energy. During those first 22 miles, I went from wondering what marathon I could do next to the real tough physical and mental grind of the last 4.2 miles and thoughts of never doing this again! But the tens of thousands of people in Central Park and stadium-like finish area shouting and cheering helped get me across the finish line! I finished in 3:58, under the four hour mark which was my goal and beating my last marathon time by 16 minutes!”

Steve said, “I ran pretty well for the first 23 miles but began cramping and shuffled in the last three finishing in 4:18. It was 15 minutes slower than I’d hoped but about what I deserved based on my training where conflicts got in the way.”

Both enjoyed the experience. Andy said, “After it was done, I had so many friends and family members reach out to me on Facebook, by text and emails, offering support and encouragement, also overwhelming.  After I indulged in a huge New York style pizza and the Advil kicked in, I started thinking again, “What marathon am I going to do next?”

Steve closed with, “No one in New York will remember me, but I will always remember them.”

Look for the Butterball 5K on Thanksgiving Day and other upcoming events at www.salisburyrowanrunners.org